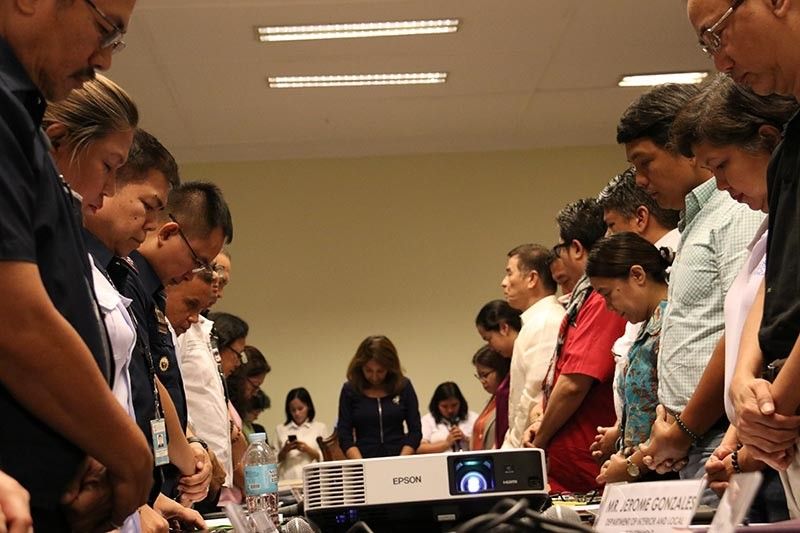 PLEASE SAVE OUR PIGS. This may well be the prayer of the Provincial African Swine Fever task force members who sat through a late-night meeting on Tuesday, Sept. 10, 2019, to find ways to protect the local swine industry. (Sunstar Photo / Amper Campaña)

CEBU Gov. Gwendolyn Garcia is mulling over a total ban on live hogs and pork-related products from Luzon, following confirmation of African swine fever (ASF) cases in two regions there.

The total ban was a suggestion raised by the Central Visayas Pork Producers Cooperative (CeViPPco) on Tuesday evening, Sept. 10, 2019, during an emergency meeting with members of the Provincial ASF task force that Garcia had called.

“This virus can spread so fast.... If there are no legal implications or impact on other industries, then we would recommend the banning of products from Luzon coming to Cebu,” he said.

The Provincial Government doubled its efforts against ASF after 14 of 20 pigs’ blood samples sent to the United Kingdom tested positive for ASF.

Garcia is also considering demanding additional documentary requirements for live hogs and pork-related products coming from outside of Cebu.

“I have to study these very, very, very closely. I will be talking with (Bohol) Gov. (Arthur) Yap.... What we need to decide on is the request of the industry because there is a possibility that Regions 3 and 4-A may already be infected,” Garcia said.

At least 7,416 pigs within the one-kilometer radius of affected areas in parts of Rizal and Bulacan provinces had been culled to prevent the spread of the disease.

The province of Rizal is part of Region 4-A while Bulacan belongs to Region 3. These provinces are approximately 105 kilometers apart.

“Give me time to study this very carefully. We also have to weigh this against other industries or businesses. But rest assured, I will decide,” Garcia said.

In the meantime, the governor wants key agencies and the public to double their vigilance.

Consumers are also advised to remain vigilant when buying meat and meat products, and always look for the “National Meat Inspection Service” seal as a guarantee.

Garcia said she will also call for a meeting with the local Price Coordinating Council and the Department of Trade and Industry to stabilize the prices of hog feeds and pork meat.

Department of Agriculture 7 Director Salvador Diputado said they have observed a slight increase in the prices of pork sold at the Carbon Public Market in Cebu City.

The Provincial ASF task force has also strongly discouraged hog raisers from swill feeding, or the practice of feeding food scraps to swine.

The Hotel, Resort and Restaurant Association of Cebu has already alerted its members against selling food scraps as swill and to dispose of these instead.

Arriving passengers via seaports and airports are also advised to dispose of their pork-related products and pork byproducts in receptacles provided within terminals and piers.

Diputado assured they are cooperating with other agencies in implementing the different preventive measures.

“Here in Central Visayas, we are not affected because we don’t have any reported incident of ASF. Our preventive measures were in place long before the ASF cases in Luzon were confirmed. We have been cooperating with the involved agencies for the biotech protocols,” he said.

He said there is no reason for consumers to panic since most of the pork in Cebu is sourced from local hog raisers.

Diputado urged raisers to report any unusual or sudden death of hogs in their farms.

He also asked them to look out for the symptoms of ASF, which include fever and lesions. WITH JOB, HBL OF SUPERBALITA CEBU / LRC