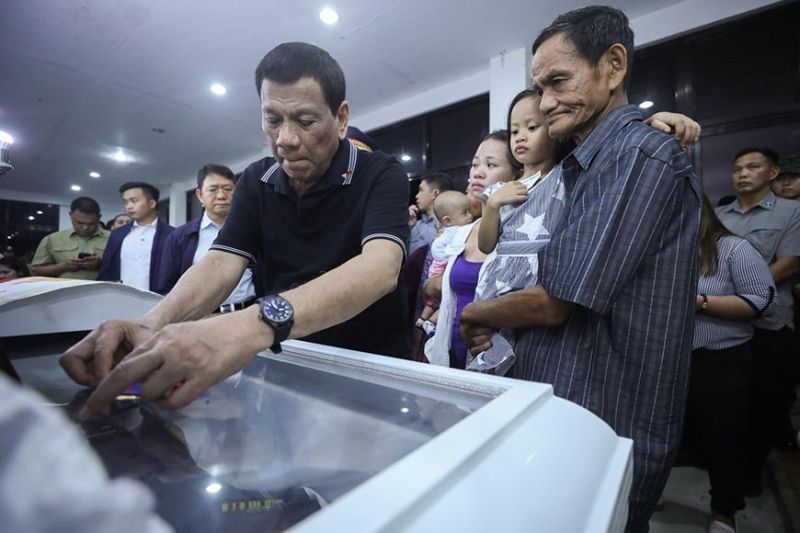 NEGROS. President Rodrigo Duterte confers the Order of Lapu-Lapu with the Rank of Kalasag on one of the slain police officers when he visited the wake at the Camp Lt. Col. Francisco C. Fernandez Jr. in Sibulan, Negros Oriental on July 20, 2019. (Presidential Photo)

PRESIDENT Rodrigo Duterte on Tuesday, September 10, further raised the reward money to P7 million for anyone who can capture or kill those behind the execution of four police officers in Negros Oriental.

Duterte also said he has directed the state forces to go on a full-scale attack against the communist insurgents.

(It will not stop. Each battalion will take turns fighting the enemies. If soldiers are already bone-weary, another battalion should replace them. The battle will be relentless.)

"At kung maaari, lumaban sila nang husto kasi hindi ako magtanggap ng surrender (And if possible, they should continue fighting because I will not accept surrender)," the President added.

The bounty on the killers of the four policemen was initially set at P1 million, but Duterte raised the reward money several times to ensure the arrest of the suspects.

(Look for the killers. Decapitate the head and put in a styrofoam boax. Put some ice and bring it here. I will hold a press conference after that.)

The execution of the four policemen was followed by a series of shooting incidents in the next 10 days that killed 15 more people, including a one-year-old child.