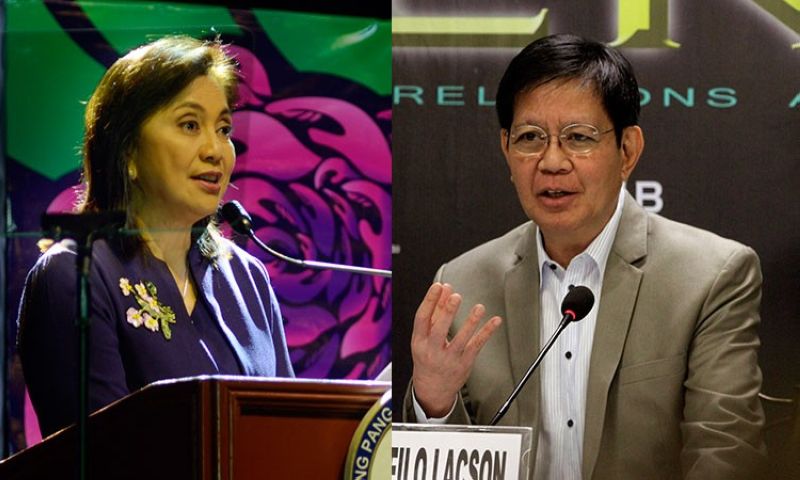 By President Rodrigo Duterte's standard, Panfilo Lacson, multi-term senator of the land and former national police chief, is "ignorant." Ping is trying to be a crusader but he is "ignorant" who wants to be president. And if Vice President Leni Robredo would become president, "patay," meaning the country, not Robredo.

What drew the presidential results was the criticisms made by Ping Lacson and VP Leni, in separate statements, on Duterte's declaration that it is "OK for police to accept gifts out of gratitude, earning extra cash from video-karera."

Lacson was schooled in Pamantasan ng Lungsod ng Maynila, Philippine Military Academy and Lyceum University of the Philippines. Robredo was a bachelor's degree holder in economics at the UP Diliman and law graduate from University of Nueva Caceres. She was a lawyer and activist before she joined politics.

The President said he couldn't blame Lacson "because he is not a lawyer." But Robredo is a lawyer. Duterte's explanation: she does not read a book.

Lacson's retort on Twitter, "Pray, tell, who is ignorant?"

Senator Ping Lacson, commenting on President Duterte's suspicion that the senator is running for president, didn't deny that he is. He just said he is "not even sure" if he would run.

One speculation is that Lacson and Senate President Tito Sotto would team up for the 2022 race, while Bongbong Marcos would be Sara Duterte's running mate. If Bongbong would win his protest and assume the VP office before the next elections, he might not settle for remaining as No. 2.

Where would that place VP Leni Robredo? Many past races had more than two contenders. The 2022 presidential derby might not be any different.

A killer for BuCor chief?

Senator Bong Go has repeatedly said he wants a killer to head the Bureau of Corrections. After Bato dela Rosa, a former PNP chief, and Nicanor Faeldon, a former marines commander, had failed to stop the anomalies at BuCor, including the sale of prisoner's freedom, Go is convinced that only a killer could do the job.

The qualification is not in the statute books, of course.

But maybe a murderer is not what the office requires. How about a killer who is not corrupt and cannot be corrupted? An oxymoron.

Small Town Lottery (STL) outlets in Cebu City and Lapu-Lapu City must have owed huge sums of money to the Philippine Charity Sweepstakes Office (PCSO). That is the reason cited for their continued closure even though other STL outlets have already resumed operation.

A source said that STL operators could not pay the entire amounts they're asked to pay because part of the money went elsewhere, presumably PCSO officials they colluded with and other people overseeing the lottery business.

The extent of losses and system of looting in PCSO. promised when the lotto operations were shut down, have still to be disclosed.