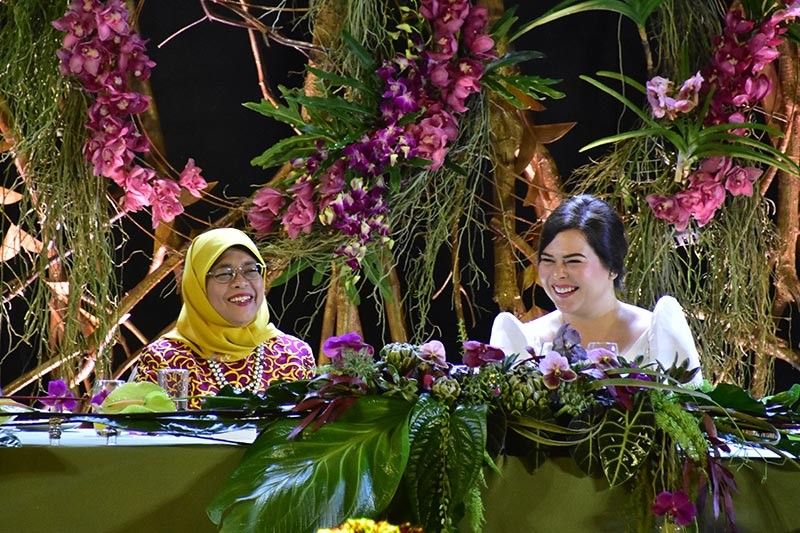 SINGAPOREAN President Halimah Yacob wants to strengthen the country's partnership with key cities in the Philippines in the coming years.

Yacob arrived in the Philippines on Sunday, September 8, and met with President Rodrigo Duterte.

Yacob's state visit in the country commemorates the 50th anniversary of bilateral relations between both countries.

"We enjoy excellent ties with the Philippines. We cooperated in so many areas from the meeting we had in Manila with the President Duterte," Yacob said.

She also said Singapore wants to strengthen mutual cooperation with the country, not only in the national level, but also with key cities such as Davao City.

Yacob also said "there are strong synergies for economic cooperation and business partnership in many industry sectors."

"There are any opportunities both countries could work together: of areas of infrastructure development, and sustainable urban solutions," she said.

She said Singapore is honored to be the host to a pair of Philippines Eagles that arrived in June 2019 under a 10-year breeding loan agreement.

Yacob visited the Philippine Eagle Foundation in Malagos, Baguio District on Wednesday, September 11. The President's visit was closed to the media and the public.

"As this visit stamps another milestone in our shared history, let us look forward for fruitful exchanges for the betterment and benefit of both our nation," Davao City Mayor Sara Duterte-Carpio said.

It is the mayor's first public appearance in an event since she filed for a medical leave last July this year. Her brother, Vice Mayor Sebastian Duterte, who serves as the city's acting mayor, was also present during the dinner.

Yacob, on Wednesday, September 11, also participated and engaged in a dialogue with the youth organized by the Al Qalam Institute for Islamic Identities and Dialogue in Southeast Asia at the Ateneo de Davao University (Addu).

Al'Qalam executive director Mussolini Sinsuat Lidasan said the president shared her experience on interreligious dialogues, and their ways of addressing issues on prejudice, ignorance, and intolerance.

"In Singapore, they have a law that prohibits anyone to bully or even to say bad things on anyone's religion. Talagang kulong pag inunsulto mo yung Chr

istians, Catholics or yung Muslim, (In Singapore, they have a law that prohibits anyone to bully or even say bad things against one's religion. You will surely be imprisoned if you insult the Christians, Catholics, or the Muslim)," Lidasan said.

He said Yacob's speech during the event is significant as the youth right now are vulnerable easily recruited by violent extremists.

"Those who initiated the Marawi Sage were mostly youth. These are very young Moros and the violence is still there. The threat is there and because of some issues in our rural areas, poor governance and the people, especially the youth are easily recruited," he said.