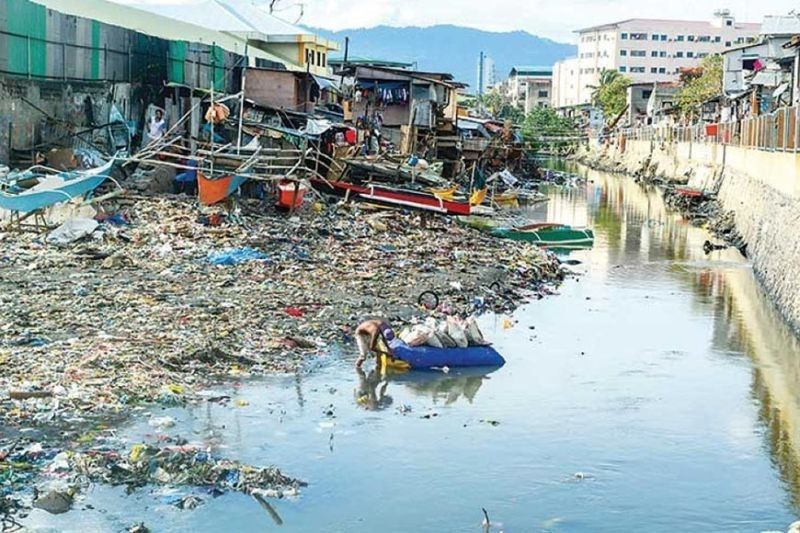 SHRINKING RIVER. In this file photo the Guadalupe River exits through Barangays Pasil (left) and Ermita in Cebu City, much narrowed by the encroachment of houses and trash on its banks. Is it any wonder that when heavy rains come, the river overflows? (Arni Aclao)

AT LEAST 700 families living on Cebu City’s riverbanks need to be relocated so the City Government can implement the needed flood control projects, such as dredging of rivers and creeks.

City Councilor Jerry Guardo, chairman of the City Council’s committee on infrastructure, said the informal settlers in the waterways in Barangays Ermita, Guadalupe, Pasil, Tejero, Lahug, Mabolo, Tinago and other villages need to be relocated immediately.

He urged the Division for the Welfare of the Urban Poor (DWUP) and the Local Housing Board to help the families that need to move out, especially since the Department of Public Works and Highways (DPWH) has downloaded P140 million to the City Government for this purpose.

Guardo said the City needs to start implementing the P1.5 billion worth of flood control projects. It also needs to finish the P1 billion worth of projects funded by the DPWH in Tejero Creek and Butuanon River (Binaliw-Bacayan areas) as a way of addressing the flooding problem in the city.

He said that when the City made its drainage master plan in 2006, only 127 flood-prone areas in the city were identified.

The number has grown, Guardo said, thus the need for the immediate implementation of flood mitigating measures.

On July 22, 2019, the City Council received from the DPWH a copy of its Comprehensive Study of Metro Cebu Integrated Flood and Drainage Master Plan.

If the plan is not implemented, Guardo warned that floods in Cebu City and its neighboring cities and towns could worsen.

On Tuesday, Sept. 10, the Council approved a resolution supporting the Inter-Agency Task Force on Flooding created by Mayor Edgardo Labella, along with DPWH.

The Council also asked Labella to include Association of Barangay Councils President Franklyn Ong in the task force as a representative of the barangay captains.

Ong sits as an ex-officio member of the City Council. FROM PAC OF SUPERBALITA CEBU / LRC