Over 300 ex-rebels to undergo military training 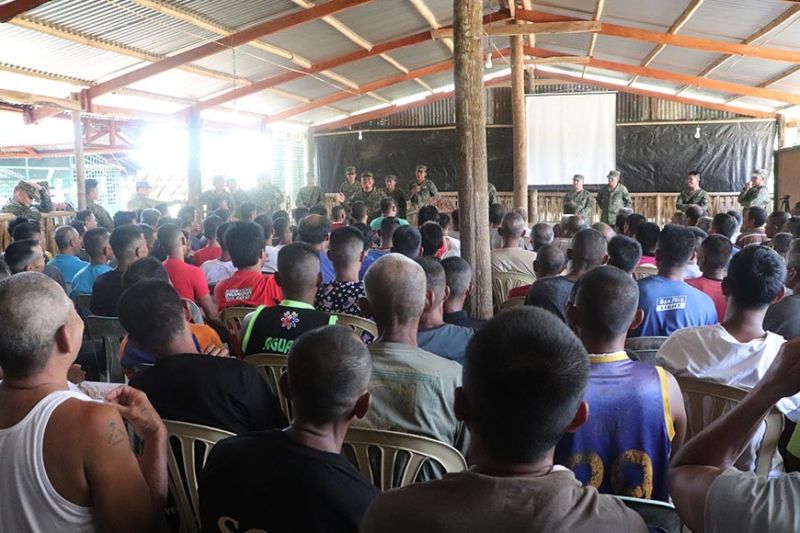 ILOILO. A total of 310 former rebels gather in Camp Peralta in Jamindan, Capiz on September 8, 2019, to start the decommissioning process. (Photo courtesy of 3rd ID)

A TOTAL of 310 former combatants of the Revolutionary Proletarian Army-Alex Boncayao Brigade (RPA-ABB) will undergo a two-month military standard training as part of the decommissioning process, which will start September 16.

The former rebels turned over to the government on Sunday, September 8, 131 long firearms and 14 short firearms. They will be given government-issued firearms, uniform and allowance after their two-month training, which will be held at Camp Peralta, headquarters of the 3rd Infantry "Spearhead" Division (3ID) in Jamindan town in Capiz.

"With the bold move of the RPA-ABB to make true to its promise to surrender their firearms and took full allegiance with the government, we are seeing that the just and lasting peace in Negros and Panay is within reach. They are now our partners in building a more progressive and developed Region 6 (Western Visayas)," said Major General Dinoh Dolina, commander of the Army's 3ID.

Dolina said the former rebels will then become part of the government's Special Civilian Active Auxiliary and will help conduct peace and security operations in their respective localities, or Eight Peace Development Community (PDC) sites in Western Visayas.

The sites are in the towns of Bago City, Kabankalan, Cauayan, Cadiz and San Carlos in Negros Occidental, Tanjay in Negros Oriental, Ibajay in Aklan, and Mason in Iloilo.

The military has identified 100 barangays influenced by RPA-ABB in the country, 91 of which are in Western Visayas.

The RPA-ABB, now known as Kapatiran para sa Progresibong Panlipunan, signed a peace agreement with the government in 2000. Its members separated from the Communist Party of the Philippines-New People's Army in 1996 after denouncing rebel leader Jose Maria Sison's violent and bloody ideology.

Decommissioning is one of the five components of Clarificatory Implementing Document (CID) to the 2000 Peace Agreement, which was formulated in consultation with the Rebolusyonaryong Partido ng Manggagawa ng Pilipinas-Revolutionary Proletarian Army-Alex Boncayao Brigade and Kapatiran para sa Progresibong Lipunan.

The CID was agreed by various national government agencies.

On March 26, a dialogue with the group was initiated by 3ID in the presence of Presidential Peace Adviser Carlito Glavez Jr., where members of the group committed to fulfill the components of the CID, specifically the disposition of firearms and forces.

During the dialogue, Veronica Tabara, chairperson of Kapatiran, ensured the full transformation of her members and gave assurance to continue to help the people and the government in attaining genuine peace in their communities.

In line with this, Dolina appealed to leaders of other local communist groups in Western Visayas to take a cue from the RPA-ABB of talking to the government, so that valid issues will be resolved in peaceful ways.

"It has been proven that armed struggle is not the answer to your causes. Denounce your national leaders for they only feed you nothing but misery and poverty while they are living lavish lifestyle in the cities. Lay down your arms, return to the folds of law, talk to your government and be our partners in drawing a common solution of ending violence that affects every Filipino people," he said.