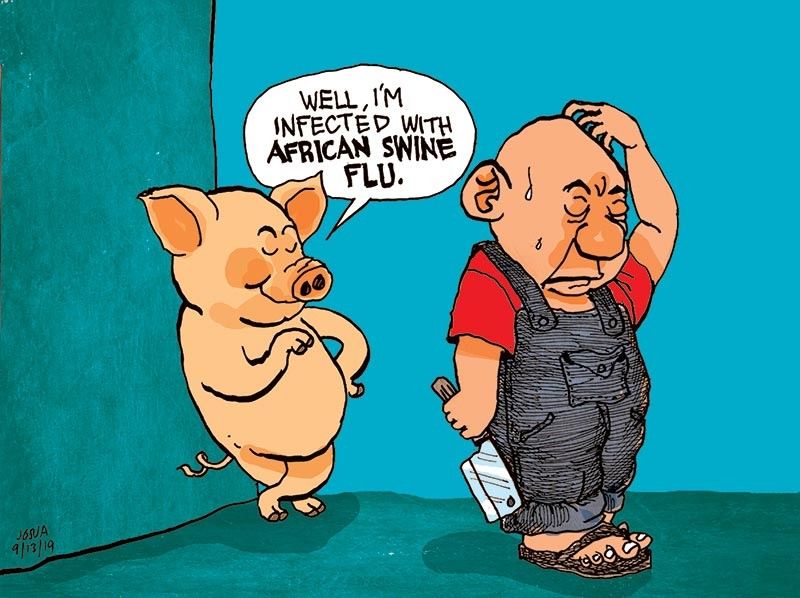 THE Cebu Provincial Government has taken active role in preventing the dreaded African Swine Fever (ASF) with the governor’s Executive Order (EO) 13, 13-A and 14, now still in strict enforcement. The ASF had caused widespread hog deaths in some Southeast Asian countries.

EO 14, issued last Aug. 22, prohibits the entry of pork, pork-related products and by-products into Cebu Province without permits or certificates for 100 calendar days.

Cebu still imports pork despite its being the fourth largest pork-producing province in the country. Cebu’s volume production is at 4.33 percent, contributing P10.98 billion to the country’s agriculture industry every year.

Pork, says a report by SunStar Cebu’s Johanna Bajenteng, takes up 85 percent of Cebu’s meat source. Chicken, fish and beef take up 15 percent. In a year, while Cebu produces around 53 million kilos, Cebuanos consume about 63 million kilos of pork per year. Thus, Cebu has to import.

The Department of Agriculture (DA) 7 has closely monitored seaports and airports for pork shipments. There’s also the private sector entity Central Visayas Pork Producers Cooperative who deployed 100 personnel to monitor and educate hog raisers in the region to combat the ASF virus.

The protocol urges swine raisers to observe deaths among their hogs and report them immediately to the their local agriculture or veterinary offices. The DA is also discouraging raisers to avoid swill feeding of feeding hogs with food scraps, an identified enabler for the spread of the ASF in Rizal Province.

“Rest assured that the DA is on top of the situaiton. We are prepared to respond to all scenarios. We assure the public there is enough supply of pork in the market. We are pleased to report that we have already suspended the ground operations in Rizal and will now focus on cleaning and disinfection operations. However, we will remain vigilant and continue to vigorously conduct surveillance and quarantine measures,” the DA bulletin read.

Meanwhile pork vendors in Carbon Market are complaining about the drop in sales. Ever since the ASF surfaced in the news, there had been palpable decrease in earnings. That, while there is no report of any ASF-infected products in Cebu.

It may also help that the public be informed that even the consumption of an infected pork has no effect on human beings.