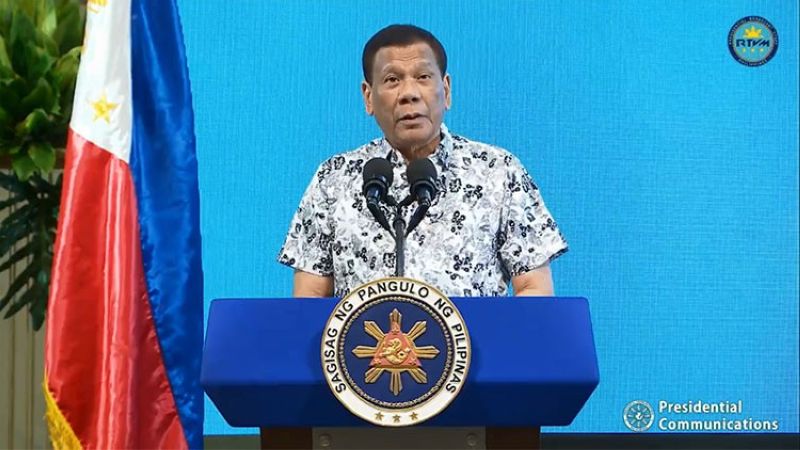 BATAAN. President Rodrigo Duterte leads the inauguration of the Bataan Government Center and Business Hub "The Bunker" at the Capitol Drive in Balanga City, Bataan on September 12, 2019. (Screenshot from RTVM video)

FOLLOWING the controversial release of 1,914 heinous crime convicts, President Rodrigo Duterte on Thursday, September 12, bared his plan to initiate an entire revamp at the Bureau of Corrections (BOC).

The President floated the idea of possible overhaul of the BuCor during the inauguration of the Bataan government center and business hub in Balanga City, Bataan.

In his speech, Duterte hinted that "everybody will have to go," as he noted the massive corruption in the bureau following the implementation of the Good Conduct Time Allowance (GCTA) Act, a 2013 law that allows the early release of inmates on the basis of good behavior.

He also stressed that he is focused more on going after those erring BuCor officials who take advantage of the GCTA law, rather those who "acted in good faith."

"Setting aside all the legal infirmities there, even if it was allowed, corruption was present. Sabihin ko lang sa inyo (I'm just telling you). And everybody will go, will have to go. Alam nila iyan (They know that), not because they were maybe exercising a questionable provision of law and arrogating upon themselves or to themselves that power," Duterte said.

"Wala sa akin iyan (I don't mind that). If it is done in good faith, hindi kita aanuhin (I will not harm you). Pero kung sabihin mong bayaran (But if you said you received money), that is another story. I will hit you not because the law was in the limbo but because of corruption. So iyan ang maaasahan ninyo (You can expect that from me)," he added.

The Supreme Court in June this year allowed the retroactive application of the law to cover inmates convicted prior to its enactment in 2013.

The GCTA, as provided under the law, is earned as a reward for an inmate who shows good behavior and will be deducted from the jail term he needs to serve.

Records from the BuCor showed that over 22,000 prisoners, including 1,914 those convicted of heinous crimes, have been released from 2014 to early August this year.

The data revealed that the number of freed heinous crime convicts significantly rose from 62 in 2014 to 816 in 2019.

Duterte said that while the law was "regular or allowed," he could not allow its implementation because it only allows corruption at the BuCor to thrive.

"Although it was regular or allowed, corruption was there," he said.

"Ang problema ng batas na iyan, wala talagang batas na nagsasabi na kung sino. That is the greatest hiatus of them all. Walang batas kung sino ang magpirma so the guys there sa BuCor talked upon themselves to arrogate the power and started a practice which was continued," the President added.

(The problem of that law is it does not specify who should sign the release order of inmates. That is the greatest hiatus of them all. There is no law that states who should sign, so the guys there at BuCor talked upon themselves to arrogate the power and started a practice which was continued.) (SunStar Philippines)