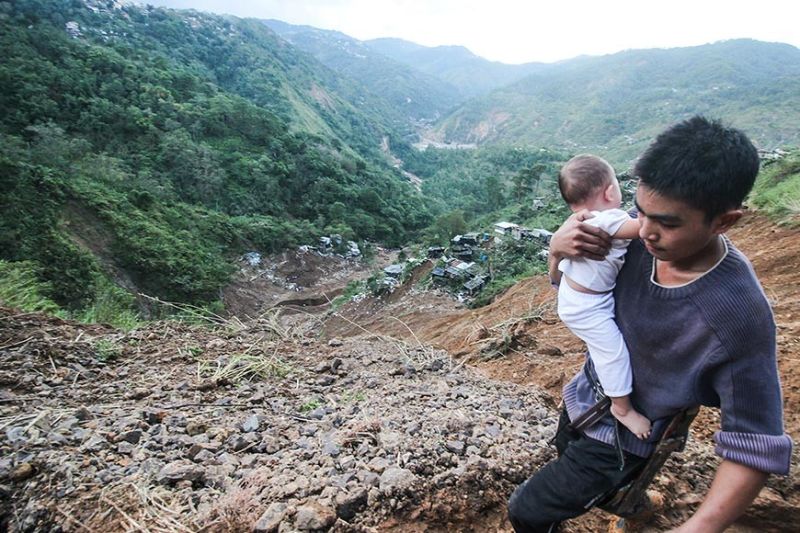 ITOGON in Benguet will commemorate the disaster caused by Super Typhoon Ompong (Mangkhut), which hit the town and buried in a landslide close to 100 people a year ago.

Palangdan described the area as "ghost town" after people abandoned the site after Ompong hit the Benguet town, causing landslide in a 184.4-hectare land in Sitio 070, Barangay Ucab.

On September 17, 2018, after the typhoon, President Rodrigo Duterte and Department of Environment and Natural Resources Secretary Roy Cimatu arrived in Benguet capitol to meet the affected families and presided the situation briefing.

The Mines and Geosciences Bureau in Cordillera said the landslide was not caused by mining but the month-long continuous rains in August experienced by Baguio City and Benguet due to southwest monsoon.

After a month, more aid in cash and in kind were given for Itogon.

Due to the massive landslide, a small-scale mining (SSM) crackdown in the whole Cordillera region was launched.

Cimatu also ordered the Provincial Mining Regulatory Board to address concerns on confiscated ores, exemption of gold panning in the crackdown and reiterated that SSM activities remain illegal and it must be conducted within Minahang Bayan areas.

After a two-day operation of National Task Force Mining Challenge, some 539 adits were closed.

Citizens Disaster Response Center (CDRC) on August 29, 2019 said the Philippines is one of the countries with the highest risk of climate hazards prior to changes in the rainfall patterns characteristically described as changes in monsoon performance which have been recorded.

The CDRC added there is a very slight increase in the number of tropical cyclones with maximum sustained winds of greater than 150 kilometers per hour and above being exhibited during El Nino event.

The non-government organization said that in disaster situation, 60 percent of the land area in the country is exposed to hazards and 74 percent of the Filipinos are vulnerable to disaster impacts, as 20 typhoons enters the Philippine area of responsibility every year.

In 2018, a total of 17,641 disasters were recorded, where 95 percent of them or 16,876 were anthopogenic or rain-induced landslides that affected more than two million families and 9.7 million persons.