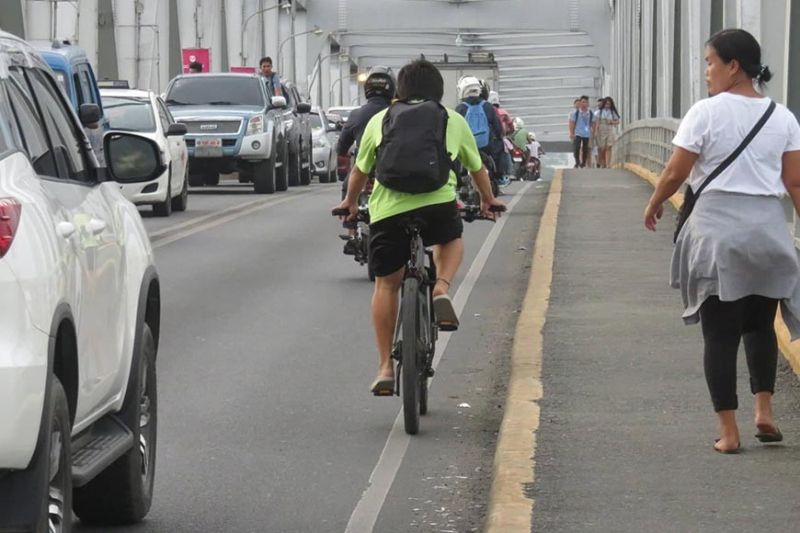 THE public’s unfavorable response to the decision to impose a bicycle ban at the two Mactan bridges prompted Gov. Gwendolyn Garcia to put the policy under review.

“The prohibition against bicycles crossing the two bridges are presently under review. We will issue a clear-cut policy soon,” the governor said in a text message to SunStar Cebu at 9:47 p.m. Thursday, Sept. 12, 2019.

Hours before the governor’s policy statement came, Lapu-Lapu City Mayor Junard Chan said in an interview with reporters that he has three requests to Garcia related to the bridge ban decided on by the Metro Cebu Bridge Management Board (MCBMB) that she heads.

These have something to do with the recent restrictions imposed on the two bridges that connect mainland Cebu to Mactan Island to put an end to persons killing themselves by jumping off the bridges.

First, he wants the governor to reconsider the ban on bicycles using the bridges’ pedestrian lanes. He said many workers and students get to and back from work or school on bicycles every day.

“I urge the governor or the Board to give it consideration because we know what the situation is like here in Lapu-Lapu. And with only one of the two pedestrian lanes on both bridges open, it will create a big problem. That’s more than 10,000 students from Lapu-Lapu City who have to get to the other side and some of them use the bridges’ pedestrian lanes,” Chan said in Cebuano.

Second, he wants the curfew order, which bans pedestrians from crossing the bridge between 1 a.m. and 5 a.m., lifted.

“Many go home during that time and can’t afford the fare that’s why they walk. Plus, jeepneys are few and far after midnight. Anyway, if somebody really wants to jump off the bridge, the police will be there to monitor,” he said in Cebuano.

The mayor said that it was already enough that police officers had been deployed on both bridges for 24 hours to stop anyone from committing suicide.

He cited as examples several instances the police had prevented youngsters from jumping off the bridges since a high school student was killed when he jumped off the Marcelo B. Fernan Bridge last month.

Chan said he is ready to deploy tanods from Barangays Pajo and Pusok to help police monitor the bridges.

Mandaue City, too, is willing to field tanods from Barangays Looc and Umapad to help police.

“When more and more people started using the bridges to take their own lives, the solution was to deploy police in both areas 24/7. Now, the Cities of Lapu-Lapu and Mandaue have agreed to help,” Chan said in Cebuano.

He added that there was no need to ban bicycles from using the bridges since their owners could easily walk their bikes on the pedestrian lanes during the crossing so as not to disrupt traffic.

“For me, if you are on a bicycle, you should not mingle with the vehicular traffic. You should just walk with your bicycle on the pedestrian lane,” he said in Cebauno.

Meanwhile, Mandaue City, through Eddu Ybañez, the mayor’s executive secretary, said the rest of the public should not be made to suffer because of the death incidents at the bridges.

“Supposed to be, the bridges connect Mandaue and Lapu-Lapu. We can’t prohibit people from passing on the bridges just because someone had tried to jump off them,” he said in Cebuano.

He pointed out that there are many workers at the export processing zones in Mactan who live in Mandaue. When they go home, many walk to save on fare, he said.

However, the governments of Lapu-Lapu City and Mandaue City support the move to install side railings that measure six feet in height on both bridges to prevent would-be jumpers

Police in Mandaue have not stopped people from crossing the bridges on foot.

Mandaue City Police Office Director Jonathan Abella said they won’t make any arrests yet since not many are aware of the policy. So perhaps they will warn them first, he said.