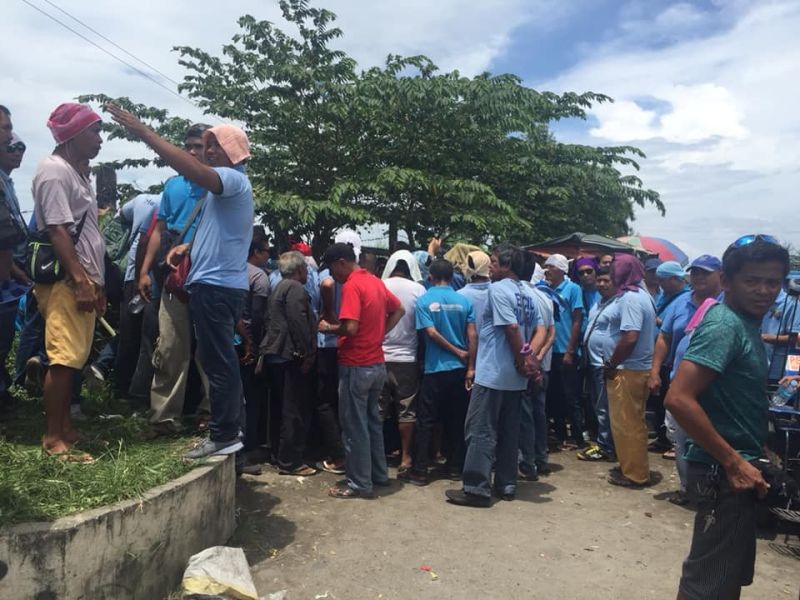 ABOUT 50 drivers of southbound public utility jeepney (PUJ) in Bacolod City temporarily stopped their trips for more than two hours yesterday and held their protest at the Pope John Paul II Tower on the implementation of the 45 to 60 days traffic experiment of the Bacolod Traffic Authority Office (BTAO).

Wilfredo Canonicato, president of Sum-ag, Pta. Taytay Drivers Association, said they temporarily stopped their trips because they want to discuss their problem on the implementation of the new traffic experiment with the city officials and BTAO.

“Since the traffic experiment was implemented on Tuesday, most of our drivers plying Sum-ag, Pta. Taytay, Singcang-Airport, Tangub, and Magsungay were arrested for committing some violations,” he said.

He added that based on the traffic experiment, they are not allowed to pick up passengers along Bacolod public plaza and SM mall which was not discussed during the meeting.

Canonicato noted that since the traffic experiment was implemented they were not earning because of the long distance and few passengers along Bacolod Vendors Plaza.

The City Council earlier approved a resolution for the implementation of the 45 to 60 days traffic experimental rerouting of PUJs plying Sum-ag, Pta. Taytay, Tangub, Singcang-Airport, and Magsungay-Central Market.

Under the traffic experiment scheme, the southbound PUJs from Araneta Street will take a right turn to Gonzaga Street, then take a left turn to Gatuslao Street going to South Capitol Road and Vendors Plaza or the terminal.

BTAO implemented the traffic experiment to address the traffic congestion along San Sebastian Cathedral, as well as the problem of the sidewalk vendors that were transferred to the Vendors Plaza.

Canonicato said they are only appealing to BTAO to allow them to pick up passengers along public plaza and SM mall.

“We already agreed to follow the rerouting, but BTAO should also allow us to pick up passengers along public plaza and SM mall. Hopefully, they should listen to us,” he said.

Canonicato added that some of the traffic enforcers were also yelling at them if they committed a violation.

Elizabeth Katalbas, Federation of Bacolod City Driver’s Association (Febacda) president, said she supported the sentiments of the drivers because of the massive apprehension of BTAO.

She said they will wait for the decision of BTAO and they are hopeful that it will be resolved soon.

Councilor Dindo Ramos, chairperson of the City Council committee on transportation, also went to the area yesterday and held a dialogue with the drivers.

Ramos said the drivers started to stop their trips from 9 a.m until 11 a.m. to air their concerns regarding the implementation of new rerouting scheme.

He said the southbound drivers were also supporting the terminals at Vendors Plaza, but they were only asking the BTAO to allow them to pick up passengers along public plaza and SM mall, to give them sufficient time to adjust, and not to arrest them.

After the dialogue, the drivers resumed their trips and agreed to follow the new traffic experiment scheme.

For his part, Police Lieutenant Colonel Luisito Acebuche, head of BTAO, said that before the implementation of the traffic experiment, they held a committee hearing with the southbound driver’s associations.

“In the first day of the implementation of the traffic experiment, most of the drivers were not complying with traffic experiment so in the second day, we strictly implemented it and we arrested about 20 erring drivers. They were complaining because some of them also failed to attend the dialogue and the committee hearing. When we intensified our operations, the drivers were forced to use the terminal at the Vendors Plaza,” he said.

“We come up with our win-win solution that the Vendors Plaza will be the point of destination of the southbound PUJs, and we will allow them to pick up passengers along public plaza and SM mall,” Acebuche said.

He said the enforcers will continue to arrest the erring drivers so they should follow the traffic experiment to ensure the smooth flow of traffic.

For the misbehaved enforcers, Acebuche urged the drivers to report it to BTAO.