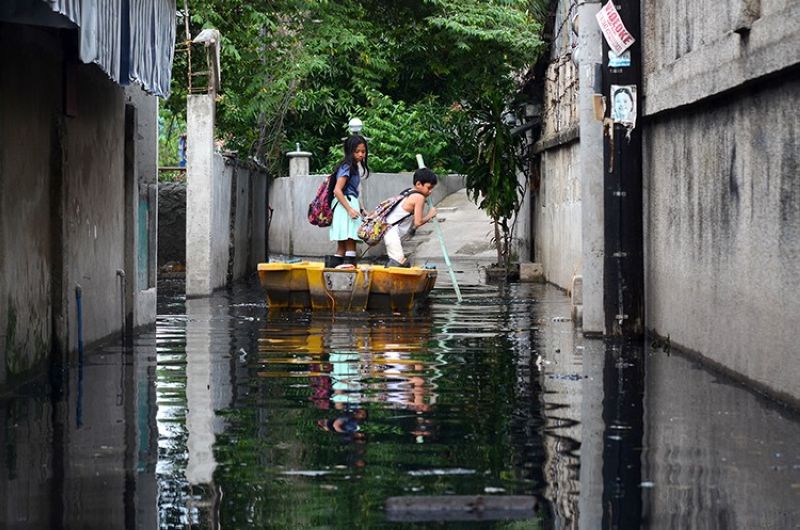 CEBU. For a month now, residents of this part of Sunrise Village in Pardo, Cebu City have been leaving their subdivision by a rubber boat, compliments of the Cebu City Government. Water from August’s heavy rains has been trapped in the narrow interior road because of poor drainage. (Alan Tangcawan)

IF there is no downpour, residents of Sunrise Village’s second street in Barangay Poblacion Pardo, Cebu City can see the sun—and the floodwater.

This problem has caught the attention of Mayor Edgardo Labella, who ordered the siphoning of the knee-deep water. Mosquitoes that carry dengue and other pests could breed in the still water.

“This should be addressed right away...the need, the urgency is there,” Labella told reporters.

The flood was reportedly caused by a clogged natural canal in the area and the third street’s residents’ stubbornness—refusing to open their road for a drainage project that would help the water in the adjacent second street subside.

This would mean draining the water or finding a waterway to let the flood flow out of the second street. Even if Sunrise Village is a private property, Labella said he has to use his authority provided by the Local Government Code to solve the second street residents’ woes.

Labella also reiterated the reason why he formed the inter-agency task force to address the flooding in the city—it is directed to come up with flood control projects worth P1.5 billion and it would coordinate with the DPWH 7, which also allocated P8.2 billion for river improvements in Cebu City.

The task force was formed to collaborate with the DPWH 7 to avoid overlapping of works and projects. The DPWH 7 will reportedly implement a flood control project on N. Bacalso Ave. in 2026, but Labella could not wait for this.

The task force, he said, can make some corrections to the plans of the DPWH 7, which in turn can also submit its recommendations to the City. (JJL)