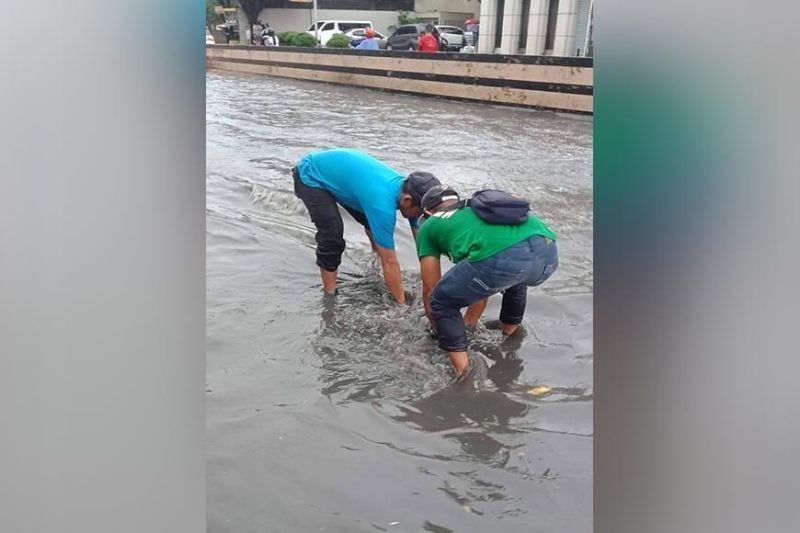 HIGHWAY OF FLOOD. Two men clear a drainage from garbage along the Natalio B. Bacalso South National Highway in Talisay City, Cebu during a downpour on Tuesday afternoon, Aug. 20, 2019. (Contributed photo)

THE drainage project in the barangays of Bulacao and Tabunok in Talisay City, Cebu is nearing completion, according to a regional public works official.

The project is eyed as a solution to the flooding problem in the villages.

Lesley Molina, an engineer at the Department of Public Works and Highways (DPWH) 7, said they have completed around 60 percent of the drainage system.

On Aug. 20, 2019, portions of Bulacao and Tabunok, including the national highway that traverses both barangays, were submerged in flood during a heavy downpour.

City and DPWH officials decided to put in place a proper drainage system to help solve the problem of flooding.

Molina, who is part of the DPWH 7’s second engineering district, said the villages have drainage, but its elevation is wrong, making the flow of floodwater slow.

The platic waste stuck in the drainage also aggravated the problem, she said.

During the downpour last Aug. 20, members of Aksyon Agad team of Mayor Gerald Anthony Gullas Jr. were able to get sacks of garbage from the drainage.

The drainage project was stopped before because it would affect the houses of informal settlers. The flood pushed Gullas to approach the DPWH 7, asking the agency to find other ways to complete the project without evicting the settlers. The DPWH 7 obliged, and the project is now almost done.

However, Molina said if people continue throwing their garbage anywhere, there would be no end to the flooding problem. (From FMD of SuperBalita Cebu, KAL)