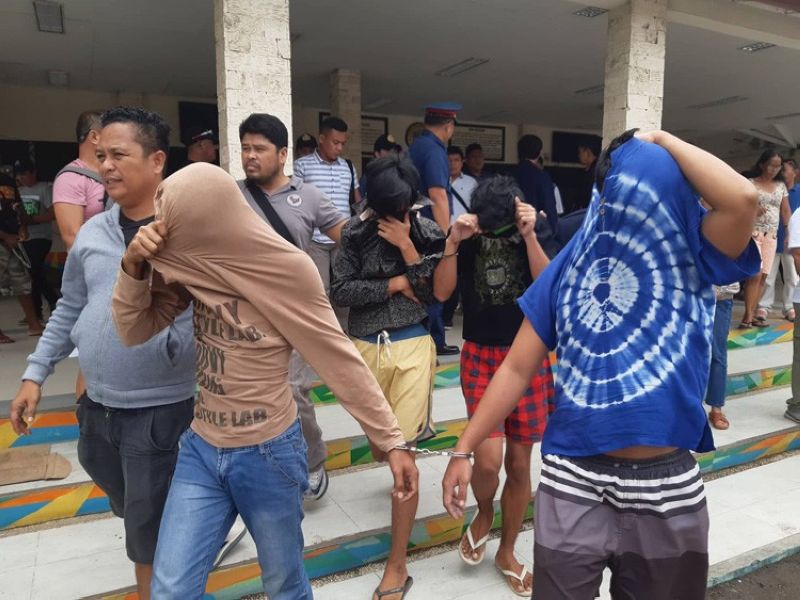 CRIMINALS ON SOCIAL MEDIA. Five young men, including a minor, were arrested by local police after they allegedly gang-raped a 16-year-old girl in Barangay Marigondon, Lapu-Lapu City on Sept. 5, 2019. The men lured their victim through social media. (SunStar Photo/Arvie Veloso)

THERE seems to be no end to horror stories of criminals using the internet or social media to seek their victims.

Except in the case of a 16-year-old girl, it was for real. Five men, including a minor, are being held by police for raping the girl in Marigondon in Lapu-Lapu City on Sept. 5, 2019.

Arrested were Steven Pino, 18, Judy de la Torre Ochea, 20, Johnric Teves Ferrater, 19, MC Clark Alvaro Aying, 22, and a fifth one who could not be named for being a minor.

An enforcer with the City Traffic Management Service (CTMS) saw the victim walking at dawn of Sept. 6, a day after the incident, Police Major Juan Capacio of the Marigondon Police Station said. The victim cannot be named because she is a minor and laws prevent the naming of rape victims.

Initial investigation showed that this group of men resort to using social media to hunt their next victims. They chat with the women, entice them to meet in person and have sex for P6,000.

This was the same method used in the case of Christine Lee Silawan, who was raped and killed last March after she met with a man in Lapu-Lapu City who had befriended her on social media. Renato Llenes, who admitted to killing Silawan, told police he used the Facebook page of a “CJ Diaz,” complete with photos of a good-looking man, to court Silawan, 16 years old when she died.

Capacio said it was the same modus used by those who raped the teenager last Sept. 5. But in this latest case, there were many who participated in the attack, he added.

One of the suspects, Aying, said to be the leader of the group, had faced charges of violating Republic Act 9995 or the law against photo and video voyeurism when he was arrested in December 2018 for uploading on social media a video of himself having sex with a minor. The case was dismissed by the court, however, after the complainant failed to show up during the hearing.

Aying said they only wanted to have fun with women willing to have sex with them. “Agi lang sa pagkabatan-on ba, trip-trip lang. Wa man mi laing bisyo. Babaye ra man,” he said. (It’s part of being young. It was all for fun. We do not have any vice except to have sex with women).

He also said the 16-year-old girl in the Sept. 5 incident was the third person the group had victimized. Aying said his group of friends would put up a drama to get the victim to empathize with them and give in to their sexual demands.

Last Sept. 10, after police monitored the social media account used by Aying, police took over the victim’s account to invite Aying to see her at a convenience store. Aying didn’t know he was setting a date with a policeman in that chat.

After they were arrested, four of the five suspects were presented to Lapu-Lapu City Mayor Junard Chan last Friday, Sept. 13. The suspects asked for forgiveness from the mayor and the victim.

Chan said he will not tolerate such criminality as he does not want a repetition of what happened to Silawan.

To the other victims of the suspects, Chan urged them to go to his office or the police to file a complaint.

Four of the suspects will face rape charges while the minor is under the custody of the City’s social welfare services office.