MCBMB to cyclists: Carry your bike or walk beside it 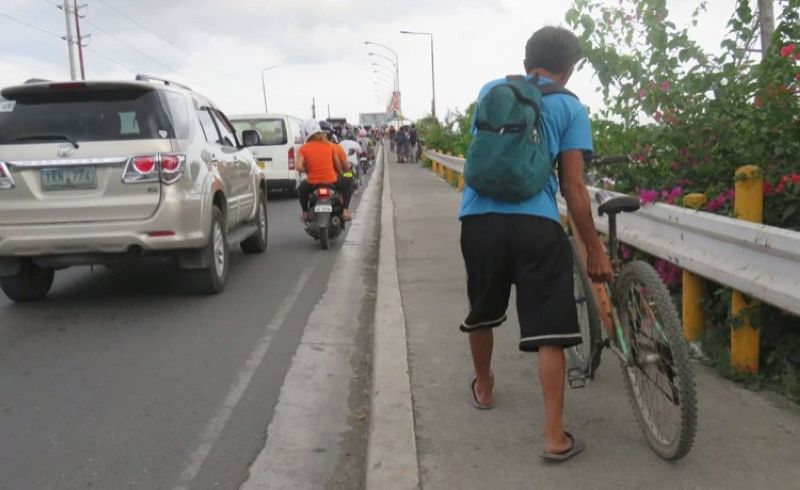 The Mactan Cebu Bridge Management Board (MCBMB) will no longer push through with its proposed "bicycle ban" in the two Mandaue-Mactan bridges, following clamor from the public. But while bikers are now allowed to cross the two bridges, they are now required to carry their bikes along pedestrian lanes. (SunStar photo/ Allan Cuizon)

FOLLOWING the public uproar, the Mactan Cebu Bridge Management Board (MCBMB) gave consideration to cyclists and pedestrians who cross the two bridges connecting the cities of Mandaue and Lapu-Lapu.

During an emergency meeting on Friday, Sept. 13, 2019, the MCBMB decided not to implement yet the curfew on the bridges pending review of the policy. The bicycle ban will also not push through.

But Cebu Gov. Gwendolyn Garcia, who chairs the board, said that if cyclists choose to cross the bridge, they would have to get off from their bicycles and use the pedestrian pathways. They can either carry their bike or walk along with it.

“Every time a biker crosses the bridge, he is violating the law,” Garcia said during the meeting.

It was Land Transportation Office 7 Director Victor Emmanuel Caindec who said in an earlier board meeting that there is a law banning bicycles from bridges.

He cited Republic Act 4136 or the Land Transportation and Traffic Code, which prohibits bicycles or non-motorized vehicles from crossing the bridge.

This would help prevent accidents involving bicycles and keep cyclists from contributing to the traffic situation on the bridges, the board said.

During the meeting, Garcia said she was aware of the netizens’ complaints and criticisms of the MCBMB’s policy banning bicycles and implementing a curfew on both bridges. But the board has to implement the law, she said.

“The law is the law. If you dare to cross the bridge now on your bicycle, you’re breaking the law. So perhaps the police can respond to that... Ug mang bash pa gyud mo kay di mo ka biseklita across the bridge, ipausab ninyo ang balaod (If you continue to bash because you can’t ride your bicycle on the bridge, then go have the law amended),” said Garcia.

The ban on bicycles on the bridges and a curfew were among the restrictions set by the MCBMB to address the growing number of people who take their own life by jumping off the bridges.

According to the Traffic and Security Monitoring System’s (TSMS) records, 17 persons were prevented from jumping from the Marcelo Fernan Bridge from January to Sept. 9, 2019. Another one jumped off but was rescued from the sea while two others died.

On the first bridge, 15 were prevented from jumping, one was rescued from the sea and two died.

As for the pedestrians, both sides of the first bridge can be used one-way through the maintenance pathway, and they have to make sure they are facing the traffic flow to avoid accidents.

The MCBMB insists there should be a one-way pedestrian traffic on both sides of the first bridge since the pathway is not equipped with railings.

At the Marcelo Fernan Bridge, pedestrians can use either side of the bridge regardless of their destination since the pedestrian lanes are established. Barriers that separate the vehicular traffic from pedestrian traffic are in place.

“We must be very strict at the first bridge because remember it has no railings. When you cross paths and there are many of you there, the tendency is you would step into the vehicular lane and that’s dangerous. So we will require one-way passage for pedestrians and those with bicycles who will push there bikes. The theory there is when you’re walking, you would see the oncoming vehicles,” the governor explained.

Also during the meeting, Garcia said new cameras will be installed on the bridges, particularly on the blind spots—six on the Marcelo Fernan Bridge and four on the first bridge.

The emergency meeting on Friday stemmed from a report of a depressed woman who attempted to jump off the bridge at 5:46 p.m. on Thursday, Sept. 12.

Leo Bacus of the TSMS said that the woman is believed to have been evicted from their house. She was rescued by the traffic enforcers of the Mandaue City Government.

As for Lapu-Lapu City Mayor Junard “Ahong” Chan’s request not to implement the curfew on the bridges from 1 a.m. to 5 a.m., the MCBMB said it is still reviewing the matter and that a clear-cut policy on this will be issued soon.

Chan said the bridges should be open to pedestrians 24 hours a day since there are Lapu-Lapu residents who walk to go home at dawn.

For now, policemen and barangay tanods conduct patrols on the bridges round the clock to prevent people from jumping off the bridge.

The MCBMB clarified that the curfew it earlier proposed is not being implemented yet.

In an interview on Friday, Chan welcomed the MCBMB’s move allowing the entry of bicycles in both bridges. He said, though, that he will continue to appeal to the board to shelve the curfew and allow pedestrians to cross the bridge without limitations.

“These students from elementary to high schools and college, it’s convenient for them to walk on the right side when going to Mandaue. On their way back, the left side is convenient for them. We also cannot let them cross from one side of the bridge to the other; that’s too risky. So that’s the reason we are asking the board to reconsider. We will just appeal to them again,” Chan said.