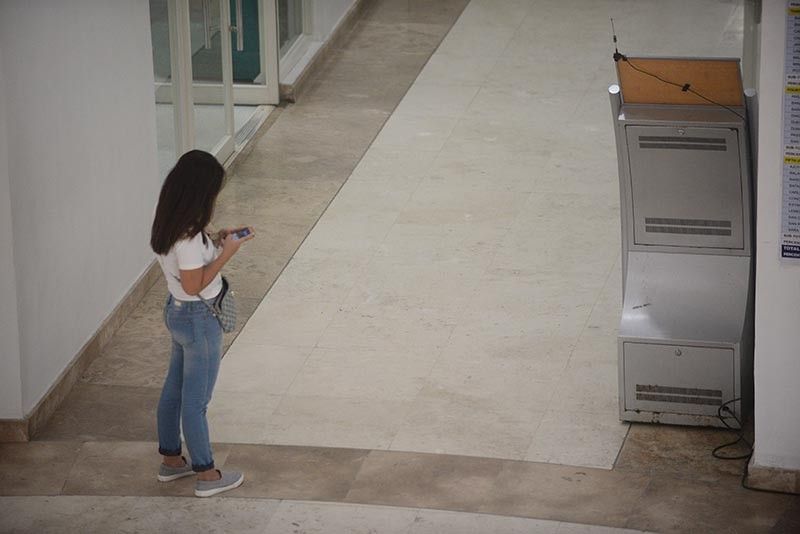 ILOILO. A visitor uses a cellphone on the lobby of the Provincial Capitol on Friday, September 13, 2019. Capitol employees are ordered to minimize the use of cellphone in the Capitol. (Leo Solinap)

ILOILO Governor Arthur Defensor Jr. has issued a memorandum to remind all department heads of the Provincial Capitol to ensure compliance with the provisions of the Anti-Red Tape Act or Republic Act 9485.

Among those highlighted in the memorandum are the no noon break policy; establishment of priority, special lanes for transacting senior, pregnant women and persons with disability (PWDs); public assistance desk; wearing of uniform and identification card; and observance of office hours and use of government facility.

"This is a reminder of the contents of the Anti-Red Tape Act, which include the no noon break policy, the use of ID and other things," Defensor said.

His order came after the Civil Service Commission (CSC), during its on-the-spot inspection at the Provincial Capitol, found the office of the treasurer empty during lunchtime.

It was Civil Service Commissioner Aileen Lizada herself who personally saw the vacant office.

Lizada also discovered a computer left open with online shopping on its monitor.

"I understand that the office of the treasurer issued a memorandum to address this concern of the Civil Service Commission," Defensor said.

Asked about the use of cellphones in the Capitol, Defensor finds it interesting to ban the use of mobile phones.

"Facebook is definitely are not allowed, but cellphones are personal communications. Like a family member calling because they need something," he said. "I think we will think about it if the use of cellphones will not be allowed."

In his memorandum issued September 9, Defensor said all offices and hospitals should ensure that all clients within their premises are attended to and served even during lunch break and after regular working hours.

A public assistance desk at the Capitol lobby must all times be ready to provide assistance to all transacting public, he added.

He also said that the wearing of prescribed office uniform is required at all times for all offices and employees while inside the Capitol or hospital remises. Dress codes are being observed during non-uniform day, while improper attire that includes shorts, haltered blouse, spaghetti straps, Sando and micro and mini-skirts is prohibited.

Capitol office hours is eight hours a day for five days, he said.

Defensor added that no official or employee shall be allowed to leave the premises unless expressly permitted by the department head. A pass slip shall be secured stating the purpose for going out.

It is also strictly prohibited for the employees to hang around the cafeteria and malls.

All multimedia gadgets including laptops, desktops and telephones owned by the Iloilo Provincial Government must be for official business only, while the use of personal cellular phones must be minimized during office hours except for official and emergency cases, the memorandum stated. (SunStar Philippines)