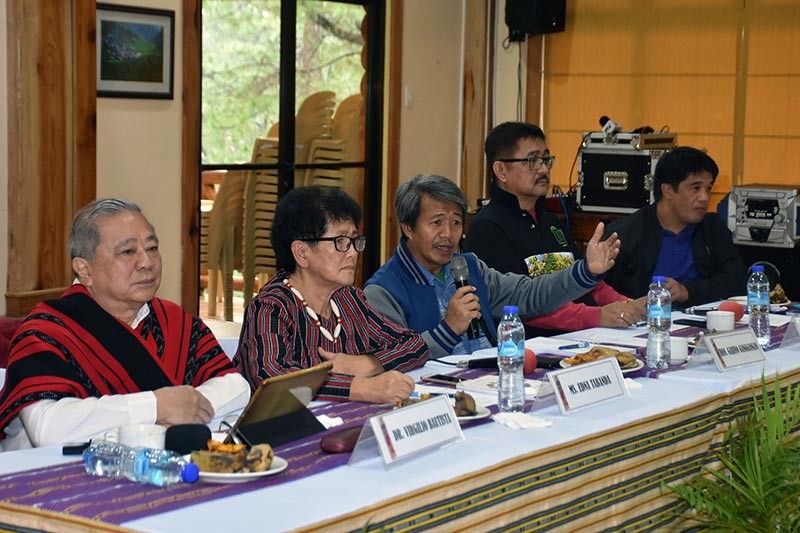 BAGUIO. Sadanga Mayor Gabino Ganggangan reminded the younger generation on the importance of the September 13, 1986 "Sipat" or the Mount Data Peace Accord as he reminisces the historic event that led to the creation of the Cordillera Administrative Region. (Redjie Melvic Cawis)

A parade was led by CPLA members along Session Road to commemorate the "Sipat" agreement on Friday.

"Such activities should have never been allowed, as CPLA has been declared persona non grata by the Baguio City Council in 1999. The CPA reiterates anew its position against the commemoration of the Mt. Data Sipat, which is an insult to the Cordillera peoples' struggle for regionalization, genuine self determination and the Cordillera indigenous socio-political practice of Bodong (peace pact). Commemorating the 1986 Mt. Data Sipat is a deplorable historical misinformation and revisionism committed by the Duterte regime in complicity with the Cordillera Peoples Liberation Army," the CPA statement said.

The CPA said the CPLA has been discredited and falling apart. A number of its members were integrated with the Armed Forces of the Philippines while some transformed into a socio-economic group of the government.

The group added that CPLA should have long been disarmed and disbanded but impunity is allowing its continued existence, since they are not punished for their human rights atrocities and CPLA also becomes active when used by the government in the implementation of its counter-insurgency program.

"The Duterte regime issued Proclamation 575 in September 2018 declaring September 13 a special holiday to commemorate the Mt. Data Sipat despite the fact that the Mt. Data Sipat is not accepted by many Cordillera people. Why? There is no doubt the Duterte regime may use the CPLA as another instrument in further heightening state terrorism and tyranny in the Cordillera, and especially in its implementation of Executive Order 70 or its whole of nation approach to end local communist insurgency. EO 70 has clearly identified the Cordillera Peoples Alliance and other civil society organizations as enemies of the state, thereby openly targeting civilians and activists," the statement added.

The CPA called for vigilance to continue to strengthen the peoples' struggle "against the tyranny of the Duterte regime and for the disbandment of the CPLA as we call for justice for victims of state terrorism, human rights violations and CPLA atrocities."

"Collective memory must always be retold to defeat revisionism that threatens to distort history as in the case of the CPLA. Today, to commemorate the September 13, 1987 Mount Data Peace Accord (Mt. Data Sipat) between former President Cory Aquino and the CPLA by virtue of Presidential Proclamation 575 by the Duterte regime," it added.

The CPA added the Sipat Peace Accord, which was held in Mt. Data, Bauko, Mountain Province, was also a mockery of the Sipat as a revered practice of the Bodong system.

The group added this has long been exposed as a sham and totally unacceptable, as only Binodngan tribes engage in "Sipat," which was only done to symbolize then President Cory Aquino's embrace of the CPLA.