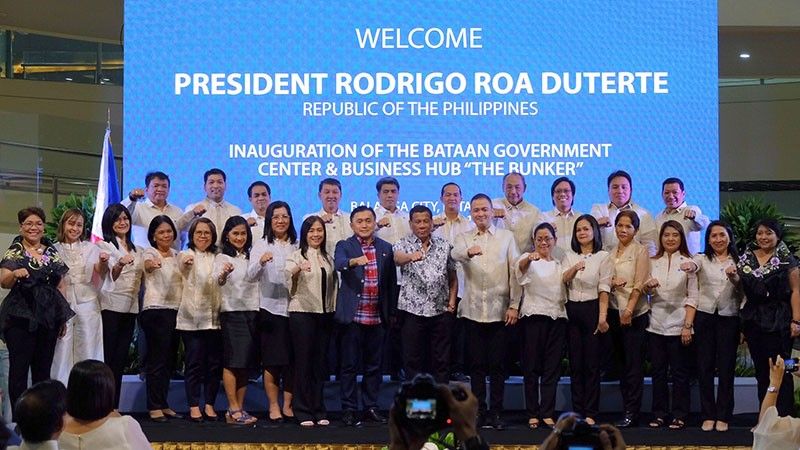 BATAAN. Representatives of National Government Agencies join President Duterte in flashing the ‘fist’ sign during the recent inauguration of the new Bataan Government Center and Business Hub or “The Bunker”, one of the few success stories of PPP in the country. (Photo by Mar Jay Delas Alas/PIA-Central Luzon)

The President led the inauguration of the Bataan Government Center and Business Hub, also called The Bunker, whose modern design pays homage to the gallant stand of Bataan as the country’s final bastion against foreign invasion 77 years ago.

“I’m really amazed, totally amazed, by the arrangement that you have made and you were able to perfect the public and private participation,” he said.

President Duterte said The Bunker is one of the few success stories of PPP in the country.

“Let me tell you, in a scale of one to 10, maybe Bataan has reached its apex in governance at about 8. Other (provinces) are still stuck at one,” he said.

Brandishing his renowned mantra against corruption, the President carped at the red tape in public transactions that “make up the ugly face of government,” citing that the repetitive process in obtaining clearances from state offices breeds corruption.

“In The Bunker, the ping-pong of transactions is eliminated as frontline national government agencies, provincial government departments, and banks are housed in this one-stop-shop, citizen center,” Governor Albert Garcia said.

He said the establishment of the center running under one system is Bataan’s contribution to the national campaign on ease of doing business and against red tape.

“All of the offices that you will be needing for the delivery of fast and hassle-free frontline services will be located in this Bunker,” Garcia said.

“Not a single centavo from government coffers was spent during the construction of this majestic structure,” he added.

Pegged at P1.3 billion, The Bunker is built through PPP with Malaysian construction company AlloyMTD, which will lease the spaces for a concession period of 25 years. (PIA-Central Luzon)