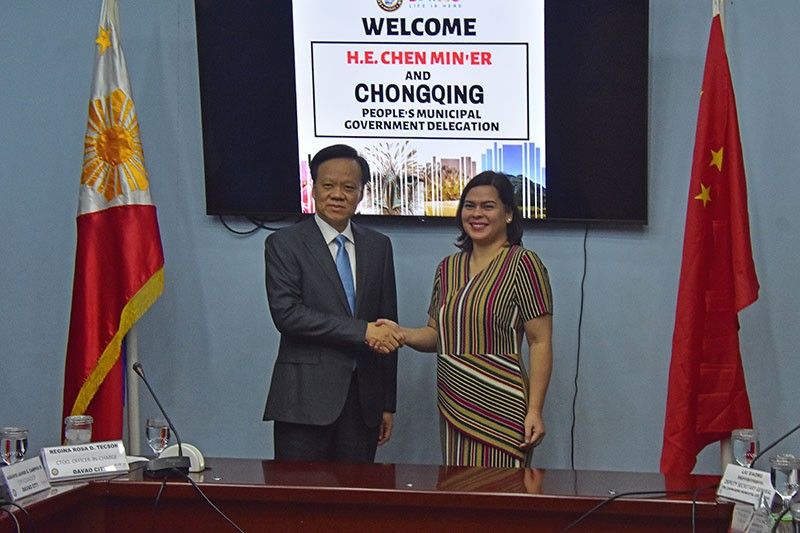 CHONGQING-DAVAO TIES. Davao City Mayor Sara Duterte-Carpio shakes hands with Chongqing Municipal Committee of the Communist Party of China Secretary Chen Min’Er during their meeting inside the Davao City Hall Conference room. Chongqing officials hope to boost cooperation between the two cities in the field of infrastructure, education, and many others. (Photo by Macky Lim)

THE Municipality of Chongqing in China is optimistic that they will be Davao City’s newest sisterhood city.

Chongqing delegates met with Davao City Mayor Sara Duterte-Carpio on Saturday, September 14, for the signing of their intent letter for sisterhood agreement.

Secretary of Chongqing municipal committee of the Communist Party of China Chen Min’er, who led the delegation, thanked the City Government of Davao for accepting their intent to explore business opportunities for both areas.

“We are ready to enhance further cooperation in economic, trade, industrial, and tourism,” Min’er said.

The head delegate also said they will be bringing some business firms particularly in the field of manufacturing in Davao City.

“Chongqing is an important manufacturing base in China and around the world,” Min’er said.

Duterte-Carpio, meanwhile, said she hopes both cities could share and influence each other’s best practices for mutual development.

“This visit presents an opportunity for us to exchange ideas, and learn from each other as we aspire to build globally competitive industries.

Both Chongqing and Davao City are key cities in respective countries,” she said.

Meanwhile, Davao City Investment and Promotion Center (DCIPC) head April Marie Dayap said formal signing transpired during the meeting due to Duterte-Carpio’s inability to sign their letter since she is currently on medical leave until September 17.

She said the Davao City International Relations Board will be receiving the letter for review and reconsideration.

Dayap said the formal signing will follow after the City Council will approve their proposed sisterhood agreement.

“We are very happy. Although there was no formal signing that transpired, we are happy that their intention to have a sisterhood city agreement with us is very strong,” she said.

Dayap said among the major projects both cities agreed to partner with are in education, sports, tourism, manufacturing, and human resource.

Last August, Chinese Consul General Li Lin said Chongqing aims to establish a government-owned industrial zone of at least 20 hectares and with direct access to port and airports has been one of the City Government’s priorities, but this has been challenging because there is no available big tracts of land near the sea.

Lin said the sisterhood partnership will bring “mutually beneficial cooperation” in the manufacturing and agricultural industry.

Chongqing municipality, located in southwestern China, is known as an industrial site with partnerships from investors around the globe like in the United Kingdom.