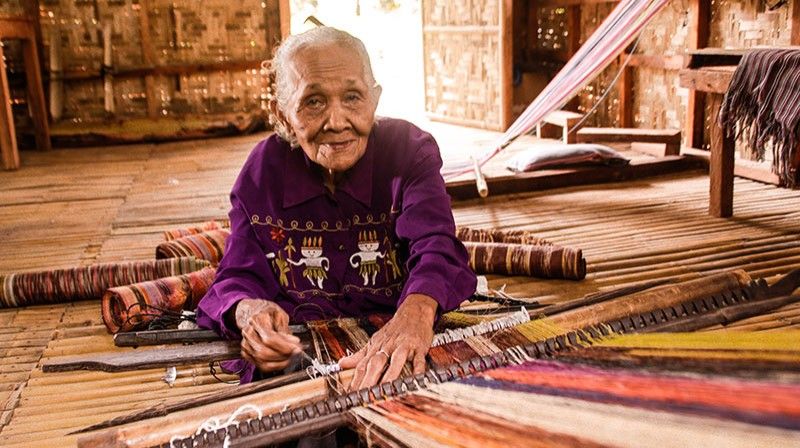 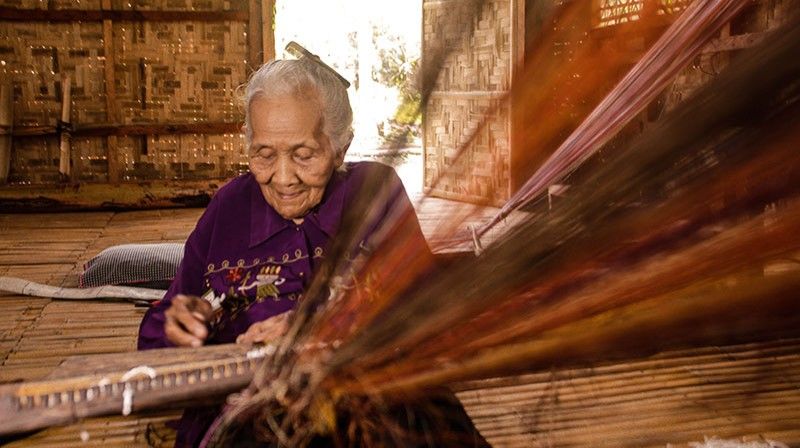 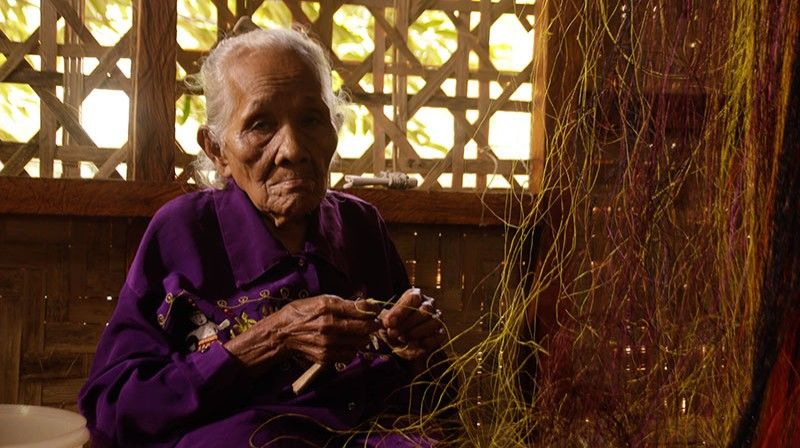 FOR over two years, young Bagobo Klatas or Guiangans have led the search for their last authentic Talanawwoh or weaver. Reviving one of their tribe’s traditions – weaving – has never been easy but they were persistent. The journey has led them to various remote places, years of frustrations made them almost give up to the cause they started, until they heard and met Apo Rita Agon.

The search is finally over.

It was Wednesday, September 4, 2019, when I finally met in the flesh Bagobo Klata’s weaving gem. After minutes of waiting inside the newly-opened restaurant – Maa To Ro, Apo Rita showed up smiling, seemingly excited for the job she’s about to do for the day. She walks slow but steady with her wooden cane.

We allowed her to go in first the El’lom Weaving Center, just at the back of the restaurant that is located at Purok Mirasol, Baguio Proper, Baguio District, Davao City.

“Apo weaves almost every day at the weaving center, but there is no definite time of when she will start weaving. There are times when she starts so early and there are times when she shows up late in the morning,” Kessia Tar, a Klata entrepreneur who led the search for the last weaver, shared adding that Apo Rita presently lives nearby. For that day, the 90-year-old weaver arrived at around 11 a.m.

When we entered the durian-and-cacao-surrounded center, Apo Rita was busy interconnecting abaca fibers. This process in Bagobo Klata weaving is called “Sund’dong”.

Considering her age, we asked Apo Rita if she can still hear and see clearly. Her response was unexpected and remarkable.

How Apo Rita was found

Nawwo or the authentic Bagobo Klata textile is a huge part of the tribe’s unique culture, but was lost for decades as elders failed to pass this to the next generation.

Tar said they could only imagine how it is made since they only heard it from stories but never saw the whole process.

Kessia along with other millennials with Indigenous People’s roots: Engr. Javen Bato; Inna Maristela Cassandra Betil Garcia; John Paul Aloy; and Marhll Felicilda, started on a journey in search for the last Talanaw’wo in 2016. But before the group was formed, Javen has already started his own search sometime in 2014.

“Makita man gud namo na halos tanan sa among tribu karon dili na gyud authentic ang ginasuot na tribal wear. Makaguol nga kung mangutana mi kung ginaunsa paghimo ang authentic Bagobo Klata wear, wala na gyud makapakita sa amo sa proseso nga dapat man gyud unta napasa ni sa sumusunod na henerasyon pero nawala gyud siya sa taas nga panahon (Most of the tribal wears worn in our tribe are not authentic. It is sad to note that every time we ask about how authentic Bagoo Klata attire made of Nawwo is created, no one among us can show the process. It is supposed to be passed to the next generation but Nawwo weaving has been dead in our tribe for years),” Kessia said.

Though the tribe kept few pairs of tribal wears with authentic designs, the young Klatas believed those are never enough. This made the group realize the need to produce more to keep their culture alive.

Bagobo Klata’s traditional wears made from its intricate textile are called Loku – top for men and women; Naw’wow or skirt for women; and Saluwa or pants or shorts for men.

Bato, in a separate interview, shared the search has brought them to Pictan and Tiko in Baguio District, Sirib in Calinan District, and even to downtown areas hoping to meet the master weaver of the Bagobo Klata.

“But we failed many times. We almost resorted to ask help from other tribes’ weavers. We kind of accepted our tribe’s fate, we thought, it doesn’t matter if it’s not authentic anymore for as long as we revive the culture of weaving. But big part of us are still hoping that the last weaver will show up and help us revive the lost part of our culture,” Kessia said.

Until they heard about Apo Rita, the search’s torch ignited anew.

“Her granddaughter, Fely, was actually just living here in Baguio District, so we immediately interviewed her and she told us that Apo Rita is still alive and living in a far flung area in Dom Panaca, Magpet, North Cotabato,” Kessia shared.

She added they went to Dom Panaca, the farthest barrio in Magpet, days after they interviewed Apo Rita’s granddaughter. But their way to the weaver’s place was tough and challenging.

“On our way to the Dom Panaca, we got lost, encountered an automobile malfunction and had to walk and ride a motorcycle just to reach the place,” Kessia recounted their experience.

But all their hardships were worth it when they finally met the Talanaw’wo.

“It’s just overwhelming to meet our tribe’s treasure. The best part was when you see her healthy and hear her saying: Yes, I am willing to teach younger Klatas about weaving,” Kessia said.

Apo Rita Agon, born and raised in Barangay Sirib, married her husband from Baguio District who later died, and remarried again a man from Dom Panaca.

She started learning weaving when she was just 7 years old.

Apo Rita went back to Davao City with a huge responsibility on her. Kessia and Javen also went on another journey in searching for the authentic Bagobo Klata backstrap loom called Logeh. This led them to Kagawad Anta in Kadole-ah (Cadalian) where parts of Logeh where found.

“Logeh will be used by Apo Rita to do the demo with the women. Thanks to generous Anta family, with whom Apo Rita worked with decades ago, as she was able to do Kagawad Anta’s request to make textile, particularly the Hotung Tolliyah style,” Javen shared.

How weaving Nawwo is done

These beautiful textiles are made from abaca fibers that went through labor intensive process. Each roll would take roughly around a month to finish depending on how intricate the design is.

When the abaca fibers are ready, it will be dyed for coloring. The abaca fibers will be tied together called the Sunddong to form long strips of abaca fibers. The next process is called Saddang wherein weavers will have to arrange the abaca fibers colors and design. It will then be weaved using the backstrap loom.

When done, the textile will be ironed using a shell called pihi which will be attached on a flexible stick called tokday.

A tokday is made of fishtail palm or sometimes bamboo.

Apo Rita shared that for her, weaving is probably the hardest job there is in the world. She added it will take her weeks if not month in doing Sunddong.

“Pag weave hinuon kaya ra nako one whole day basta lingkuran nako pero depende pud sa design. Ako pag magtrabaho ko pagmalingkuran nako, humanon najud na nako, dili nako undangan (I can weave a 5-meter ordinary Nawwo in a day, but if designs will be intricate, it will take me more days. If I start weaving, I wanted to finish it all the way, I will not stop until it is finish),” Apo Rita said.

Though there is no list of official designs for Bagobo Klata’s Nawwo, these four designs were deemed common to their tribe.

First is Hotung tolliya, a plain stripe textile. Under this design are two approaches: Kinna Ino (Binuwaya, others) and Honnod Awing also referred as the Tinadjung.

Kinna Ino, is considered the apex of Bagobo Klata textile. Kinna Ino’s textile is made from three panels: the mother piece (ino) at the center and the children on both ends (epeng).

But for Apo Rita the most difficult design is called Mob Bod.

“It is the first design I learned. It is, for me, the most difficult,” Apo Rita said in vernacular.

Not the last weaver

With Apo Rita now teaching nearly a dozen of Bagobo Klata women weavers, she has revived what was once a lost part of their culture. With new weavers being born out of her guidance, she’s probably not the last weaver of their tribe. And if the Klata’s continue to pass on this tradition to the next generations, looking for the last weaver will no longer be necessary.

A lot work still needs to be done, but for young Klatas like Kessia and her group, they wish to create a future wherein amid the changes brought by modern times, Bagobo Klata will still strive as one tribe with compact cultural identity and prosperity.