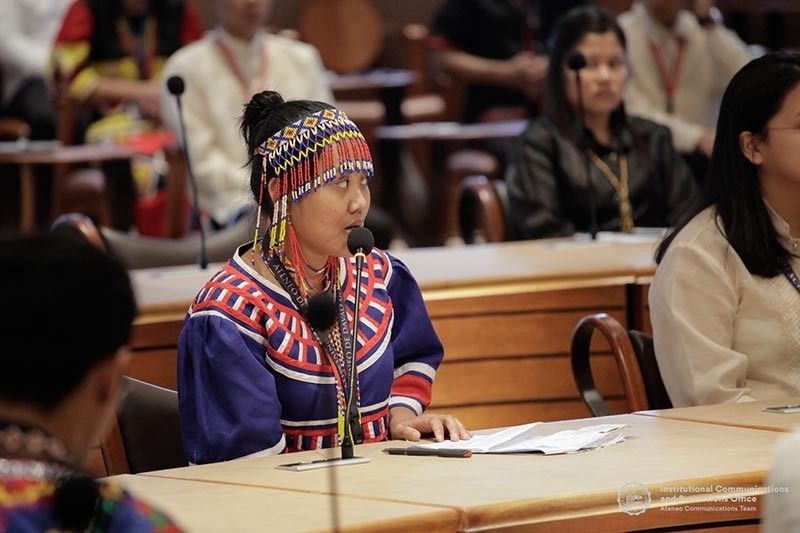 One of the delegates asking question to Singaporean President Halimah Yacob during the dialogue proper. (Photo by Addu Institutional Communications and Promotions Office) 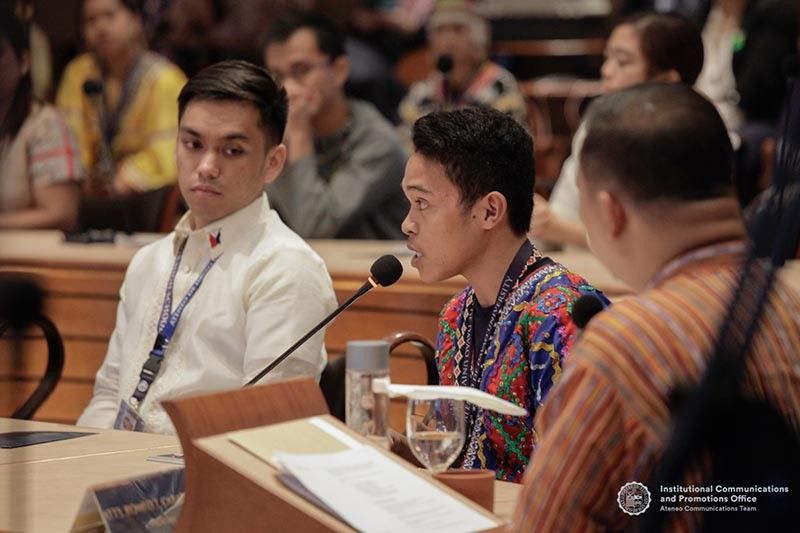 Another asking question to Singaporean President Halimah Yacob during the dialogue proper. (Photo by Addu Institutional Communications and Promotions Office) 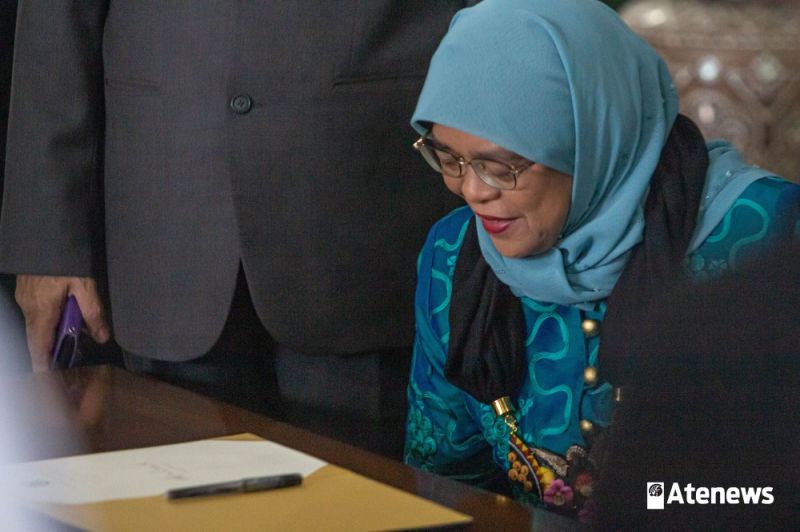 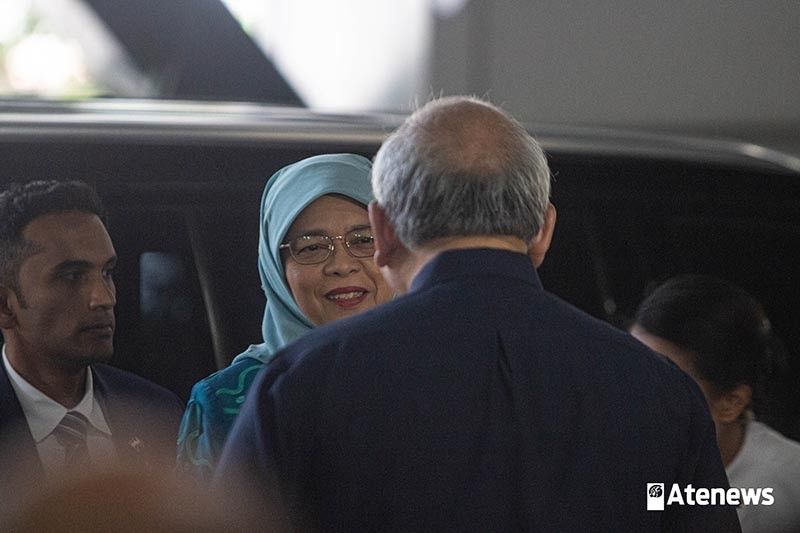 STATE VISIT TO DAVAO. Singaporean President Halimah Yacob greeted by Ateneo de Davao (Addu) President Fr. Joel Tabora (behind) before signing the school’s guestbook on September 11 as she will be one of the guest for a youth dialogue organized by the Al Qalam Institute for Islamic Identities and Dialogue in Southeast Asia. (Photo by Joseph Nasser/Atenews) 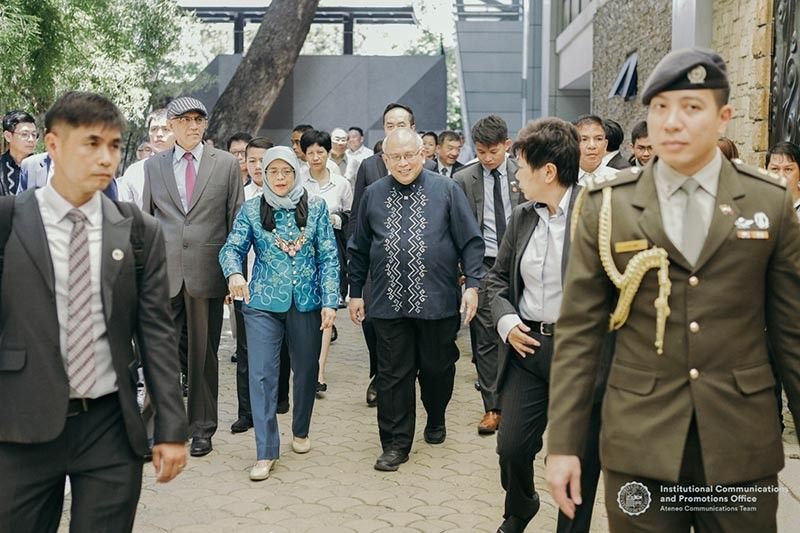 Singaporean President Halimah Yacob and Ateneo de Davao (Addu) President Fr. Joel Tabora (both centered) escorted by security officials on their way to the venue of the dialogue. (Photo by Addu Institutional Communications and Promotions Office) 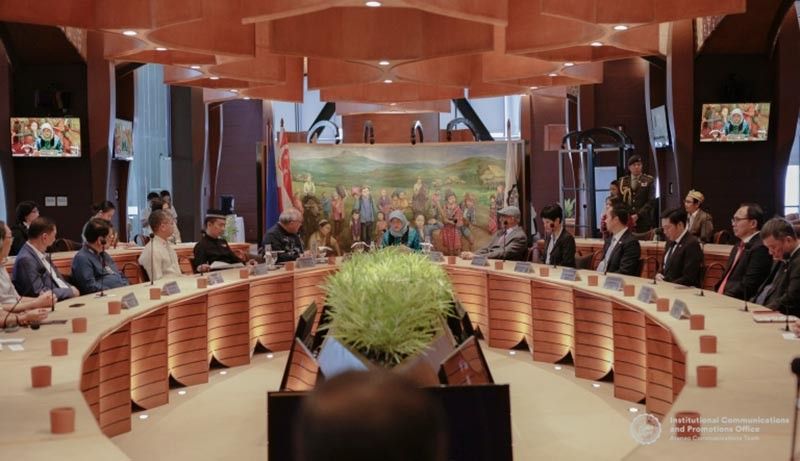 DIALOGUE. Singaporean President Halimah Yacob engaged with the youth in a forum centered in intra and inter-religious dialogue, peacebuilding and in preventing and countering violent extremism last September 11. (Photo by Addu Institutional Communications and Promotions Office) 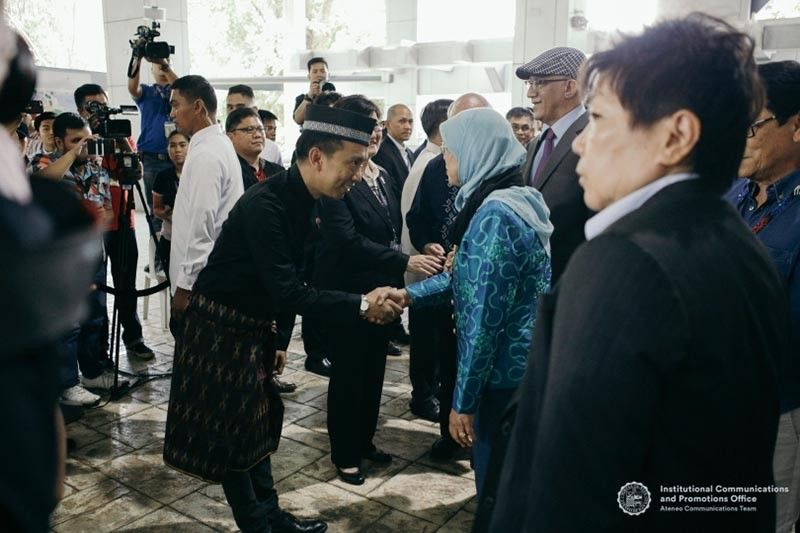 SINGAPORE’S first lady president, Halimah Yacob, set foot in Davao City for the first time last September 10, making her the third head of state to do so under the administration of President Rodrigo Duterte.

Yacob’s short visit in the city coincides with the 50th anniversary of the friendship between Singapore and the Philippines which she hopes to be strengthened for the coming years.

Despite her short yet hectic trip, she took time to visit and had engaged with the youth in a forum centered in intra and inter-religious dialogue, peace-building and in preventing and countering violent extremism last September 11.

The forum, organized by the Al Qalam Institute for Islamic Identities and Dialogue in Southeast Asia at the Ateneo de Davao University (Addu), had the privilege to have Yacob who is an advocate for social inclusivity amidst diverse ethnic and religious group.

Her speech during the event may have only lasted for 16 minutes, but for Mindanaoan youth participants of different religious backgrounds who witnessed her at flesh, it was already a life-changing event which they are bound to carry out in their mission to commitment to spread peace and combat any forms of hatred.

Singapore, as a progressive country member of the Association of Southeast Asian Nations (Asean), is recognized all over the world for its no-nonsense approach in protecting ethnic sensitivities – has strict laws as part of its repertoire.

Despite being a multi-cultural country, the Lion City remain one of the world’s most socially harmonious places.

Although challenges continue to pose, Yacob continues to push for policy advancements which would safeguard the welfare of everyone, especially in times where global threat is inevitable.

Prejudice, however, has been a longtime struggle in the Philippines, particularly in the island of Mindanao.

Social injustice and inter-religious conflict between Muslims, indigenous Lumad, and Christians, had resulted to almost a half-century of armed struggle lead by rebel groups after decades of land-grabbing, marginalization and even massacre of their kin.

But with the recent passage of the Bangsamoro Organic Law (BOL) which later on created the Bangsamoro Autonomous Region in Muslim Mindanao (Barmm), the longing for peace in Mindanao is no longer impossible.

Singapore and Mindanao might be sharing the same boat, but each one has its own woes which a mutual cooperation is a key.

Social inclusion is key to progress

"A society is fragile if one group views another as a threat. It is important to overcome the forces of division, and build bridges instead of walls," Yacob said during her speech at Addu.

“Singapore is where it is right now because of meritocracy. They are a state that values the contribution of each and every one,” he said.

Al Qalam communications specialist Kristelle Rizardo said that while religion seems to be a barrier for some countries, she said, in Singapore, freedom to worship and express their religious devotion is not unusual.

“I remember her saying that she cannot imagine Singapore being ‘homogenous’ or losing its multiculturalism. She said it is in multi-culturalism and diversity where they find strength,” Rizardo said.

Addu president Joel Tabora, in his speech, believes that interreligious dialogue is the key to end to end social injustice and inter-religious conflict.

“We welcome you to our University particularly as a promoter of women’s rights, the welfare of the underprivileged, the marginalized, the worker, and of the environment, our common home,” Tabora said.

“In this part of the Philippines, Mindanao, where conflict has had its roots in social injustice and inter-religious conflict between Muslims, indigenous Lumad, and Christians, we welcome you especially as an advocate of interreligious dialogue,” Tabora added.

Singapore as a template for Barmm

With Barmm still under the “infancy stage”, Lidasan, who also serves as a member of the Bangsamoro Transition Authority (BTA), thinks that Singapore could bed a template to the newly-ratified autonomy.

“Barmm is calling for ‘moral governance.’ We can look at Singapore as our role model,” Lidasan said.

He also believes that Singapore has best practices, in terms of policy and strategies, to ensure that peace and progress would be attained in its execution.

While for Salaam Youth Project coordinator Fatima Star Lamalan, finding strength in diversity, as emphasized by Yacob, is one of the principles that Barmm could adapt since the newly-ratified government had also aims to adhere the longtime differences brought by religious diversity in the island.

“With this principle, the diversity will be its strength and not the hindrance to nourish and eradicate all the negative images it has before as ARMM. Finding the strength in being a government that the scope is not only Muslims but for everyone”, Lamalan said.

Youth as catalyst for peace

Salaam, a Mindanao-wide movement for peace under the auspices of Al Qalam that promotes unity in diversity in the pursuit of sustainable and inclusive peace in Mindanao, were among those groups who had the privilege to participate in the dialogue.

Lamalan said Yacob’s ‘mother figure’ of involving Singaporean youth in their proposed legislative and executive measures, is something that the Filipiino youth must do – to be educated ad get involved.

“In Singapore, they engage in their youth in a very subtle way without making them think that they’re doing something that is not suitable for their age and are obliged to do that. Her point is that, if you want to engage with the youth, you have of make them feel comfortable of what they’re doing”, she said.

“All of these have something to do with religion and that’s why it’s vvery important for us to do inter-religious dialogue,” he said.

The President also reminded the youth to be rational in expressing their grievances as they are vulnerable for recruitments to extremist groups.

“She believes that any forms of extremism doesn’t solve any problem. In, fact it worsens,” Lidasan said.

“She understand the youth are full of idealism. That is why sometimes they are easily being recruited without proper guidance by the parents and school. They are easily recruited which would soon result to violence,” Lidasan added.

Lamalan, in response to the youth sector, said education is still the key to fight against ignorance and prejudice.