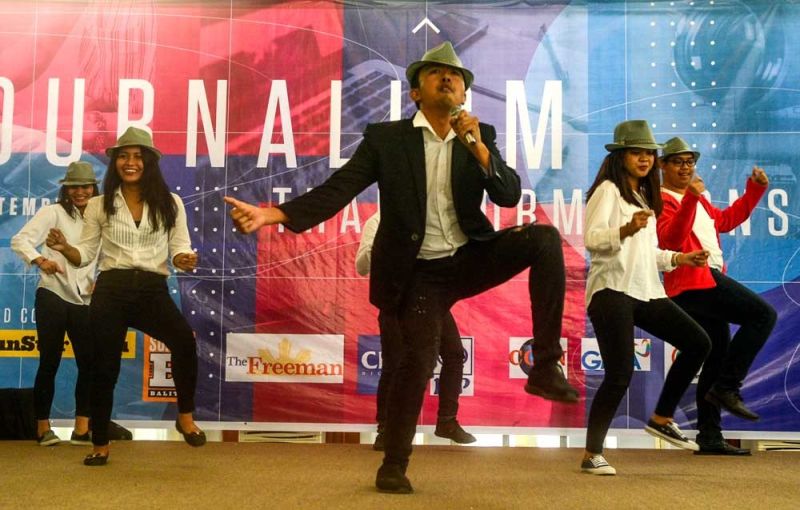 FACING a myriad of challenges, Cebu’s media workers should not be discouraged and they should go out of their comfort zones—accept changes and change for the better.

“We should not be discouraged; we should move forward. But there is a need for us to examine our way of doing things and reinvent ourselves. We have to learn to adapt in the face of this changing media landscape,” said Fr. Robert “Bobby” Ebisa, the Kapisanan ng mga Brodkaster ng Pilipinas (KBP) Cebu chapter president.

Ebisa presided over the mass on the opening day of the 27th Cebu Press Freedom Week (CPFW) held at the Capitol Social Hall in Cebu City on Sunday, Sept. 15, 2019.

CPFW is observed on the week of every September that includes Sept. 21, the date of the imposition of the martial law in 1972. Former President Ferdinand Marcos’s Proclamation 1081 led to multitude of human rights abuses, including the curtailment of press freedom—scores of activities, priests, journalists and dissidents disappeared and were killed or imprisoned.

SunStar Cebu is the lead convenor for this year’s CPFW. On Saturday, Sept. 21, the local media will celebrate the Cebu Press Freedom Day.

Ebisa, who also manages the Society of the Divine Word-run radio dyRF, said media practitioners should not lose hope as the ever-expanding modern communication technology confronts the traditional media—print, radio and television.

The challenges, Ebisa said, are new opportunities for growth and development of the local media industry.

Ebisa, in his homily, cited the novel, “Hope for the Flowers.” It is a fable “partly about life, partly about revolution and lots about hope.” The story’s main characters are two caterpillars.

Just like the two caterpillars in the book, the KBP Cebu chapter chief believes that there is more in the waiting for the media in the midst of digital revolution.

“We will adapt. We will transform. We will reinvent ourselves—and there will be a rebirth. We are butterflies. Yes, we can fly,” Ebisa said.

After the mass, the opening activities followed—a dance contest that carried the theme “body positivity” participated by dancers from diffrent media outlets. There were raffle draws, too.

Last Saturday, Sept. 14, a pageant for media workers—Mr. and Ms. Press Freedom 2019—was held at the Cebu Business Hotel in Cebu City.

A series of activities are set within the week to promote unity and camaraderie among media practitioners in Cebu. (KFD)