Trump: US ‘locked and loaded’ for response to attack on Aramco 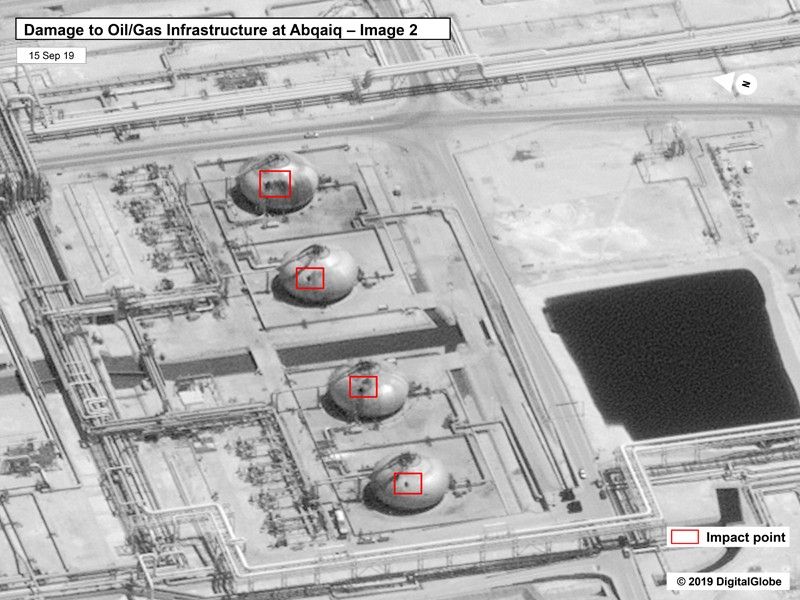 SAUDI ARABIA. This image provided on Sunday, September 15, 2019, by the U.S. government and DigitalGlobe and annotated by the source, shows damage to the infrastructure at Saudi Aramco's Abaqaiq oil processing facility in Buqyaq, Saudi Arabia. The drone attack Saturday on Saudi Arabia's Abqaiq plant and its Khurais oil field led to the interruption of an estimated 5.7 million barrels of the kingdom's crude oil production per day, equivalent to more than 5 percent of the world's daily supply. (AP) 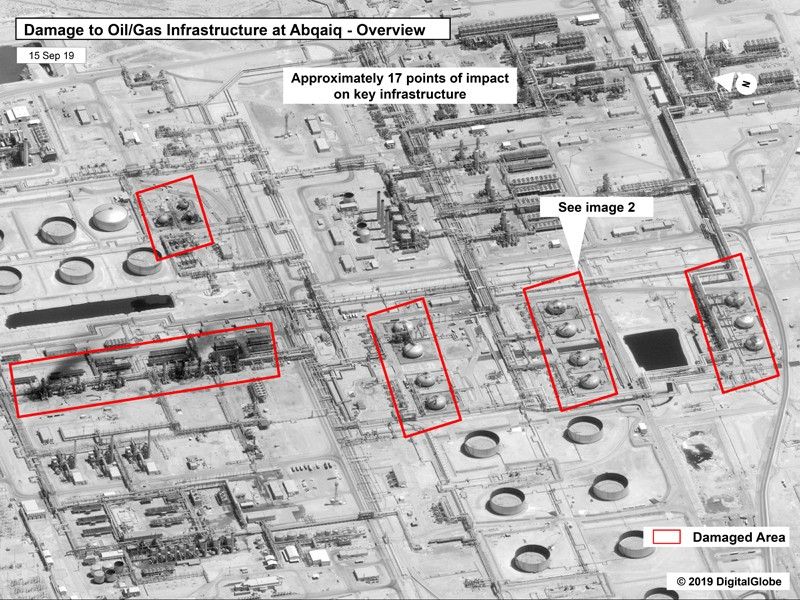 SAUDI ARABIA. This image provided on Sunday, September 15, 2019, by the U.S. government and DigitalGlobe and annotated by the source, shows damage to the infrastructure at Saudi Aramco's Abaqaiq oil processing facility in Buqyaq, Saudi Arabia. The drone attack Saturday on Saudi Arabia's Abqaiq plant and its Khurais oil field led to the interruption of an estimated 5.7 million barrels of the kingdom's crude oil production per day, equivalent to more than 5 percent of the world's daily supply. (AP)

DUBAI, United Arab Emirates -- A weekend drone attack on Saudi Arabia that cut into global energy supplies and halved the kingdom's oil production threatened Sunday, September 15, to fuel a regional crisis, as the U.S. released new evidence to back up its allegation that Iran was responsible for the assault amid heightened tensions over Tehran's collapsing nuclear deal.

President Donald Trump said the U.S. had reason to believe it knew who was behind the attack — his Secretary of State had blamed Iran the previous day — and assured his Twitter followers that "'we are...locked and loaded' depending on verification and we're waiting to hear from the Saudis as to who they believe was behind the attack and "under what terms we would proceed!"

Hours earlier, senior U.S. officials said satellite imagery and other intelligence showed the strike was inconsistent with one launched from Yemen, where Iranian-backed Houthi rebels had claimed responsibility.

Iran, meanwhile, called the U.S. claims "maximum lies," while a commander in its paramilitary Revolutionary Guard reiterated its forces could strike U.S. military bases across the Mideast with their arsenal of ballistic missiles.

The U.S. government produced satellite photos showing what officials said were at least 19 points of impact at two Saudi energy facilities, including damage at the heart of the kingdom's crucial oil processing plant at Abqaiq.

Officials said the photos show impacts consistent with the attack coming from the direction of Iran or Iraq, rather than from Yemen to the south. Iraq denied Sunday that its territory was used for an attack on the Kingdom and U.S. officials said a strike from there would be a violation of Iraq's sovereignty.

The U.S. officials said additional devices, which apparently didn't reach their targets, were recovered northwest of the facilities and are being jointly analyzed by Saudi and American intelligence.

The officials, who spoke on condition of anonymity to discuss intelligence matters, did not address whether the drone could have been fired from Yemen, then taken a round-about path, but did not explicitly rule it out.

The attacks and recriminations are increasing already heightened fears of an escalation in the region, after a prominent U.S. senator suggested striking Iranian oil refineries in response to the assault, and Iran warned of the potential of more violence.

"Because of the tension and sensitive situation, our region is like a powder keg," said Iranian Brigadier General Amir Ali Hajizadeh. "When these contacts come too close, when forces come into contact with one another, it is possible a conflict happens because of a misunderstanding."

Actions on any side could break into the open a twilight war that's been raging just below the surface of the wider Persian Gulf in recent months. Already, there have been mysterious attacks on oil tankers that America blames on Tehran, at least one suspected Israeli strike on Shiite forces in Iraq, and Iran shooting down a U.S. military surveillance drone.

The attack Saturday on Saudi Arabia's Abqaiq plant and its Khurais oil field led to the interruption of an estimated 5.7 million barrels of the kingdom's crude oil production per day, equivalent to more than 5 percent of the world's daily supply. It remained unclear how King Salman and his assertive son, Crown Prince Mohammed bin Salman, will respond to an attack targeting the heart of the Saudi oil industry.

Crude oil futures shot up 9.5 percent to $60 as trading opened Sunday evening in New York, a dramatic increase. A spike in oil prices could have negative effects for the global economy.

Saudi Arabia has promised to fill in the cut in production with its reserves, but has not said how long it will take to repair the damage. The Wall Street Journal cited Saudi officials as saying a third of output would be restored on Monday, but a return to full production may take weeks.

Trump said he had approved the release of U.S. strategic petroleum reserves "if needed" to stabilize energy markets. The president said the final amount of the release, if any, would be "sufficient to keep the markets well-supplied."

Images from the European Commission's Sentinel-2 satellite examined by the AP showed black char marks at the heart of the Abqaiq plant on Sunday, marks not seen over the prior month. Identical marks are visible on the U.S. imagery.

The Washington-based Center for Strategic and International Studies in August identified the area with the char marks as the plant's stabilization area.

The center said the area includes "storage tanks and processing and compressor trains — which greatly increases the likelihood of a strike successfully disrupting or destroying its operations."

The state-run oil giant Saudi Aramco, which the kingdom hopes to offer a sliver of in a public stock offering, did not respond to a request for comment.

Pompeo directly blamed Iran for the Saudi attack on Twitter late Saturday, and officials worked to provide evidence for his claim the following day.

"Amid all the calls for de-escalation, Iran has now launched an unprecedented attack on the world's energy supply," Pompeo wrote. "There is no evidence the attacks came from Yemen."

The U.S., Western nations, their Gulf Arab allies, and U.N. experts said Iran supplies the Houthis with weapons and drones — a charge that Tehran denies.

U.S. officials previously alleged at least one recent drone attack on Saudi Arabia came from Iraq, where Iran backs Shiite militias. Those militias in recent weeks have been targeted themselves by mysterious airstrikes, with at least one believed to have been carried out by Israel.

"The Americans adopted the 'maximum pressure' policy against Iran, which, due to its failure, is leaning toward 'maximum lies,'" Mousavi said in a statement.

Separately, Iraqi Prime Minister Adel Abdul-Mahdi's office issued a statement on Sunday denying the drone attack came from there. Oil-rich Kuwait also said it would increase security around the country's "vital sites" over the attacks.

Houthi leader Muhammad al-Bukhaiti reiterated his group's claim of responsibility, telling The Associated Press on Sunday it exploited "vulnerabilities" in Saudi air defenses to strike the targets. He did not elaborate.

Iran, meanwhile, kept up its own threats.

Hajizadeh, the brigadier general who leads the country's aerospace program, said in an interview published across Iranian media Sunday that Revolutionary Guard forces were ready for a counterattack if America responded, naming the Al-Udeid Air Base in Qatar and Al-Dhafra Air Base near Abu Dhabi in the United Arab Emirates as immediate targets, as well as U.S. Navy ships in the Persian Gulf and the Arabian Sea.

"Wherever they are, it only takes one spark and we hit their vessels, their air bases, their troops," he said in a video published online with English subtitles.

It wasn't just Iran making threats. U.S. Senator Lindsey Graham, a South Carolina Republican close to Trump, suggested retaliatory strikes targeting Iran. "Iran will not stop their misbehavior until the consequences become more real, like attacking their refineries, which will break the regime's back," Graham wrote on Twitter.

With the U.N. General Assembly taking place in a little over a week, there had been speculation of a potential meeting between Trump and Iranian President Hassan Rouhani on the summit's sidelines, possibly in exchange for the lifting of some economic sanctions the American leader imposed on Tehran after unilaterally withdrawing from the nuclear accord over a year ago.

But Trump seemed to reject that idea Sunday night, tweeting: "The Fake News is saying that I am willing to meet with Iran, 'No Conditions.' That is an incorrect statement (as usual!)." In fact, Treasury Secretary Steven Mnuchin told reporters last week that "the president has said that he is prepared to meet with no conditions."

If Iran had a hand in Saturday's attack, it could be to bolster their position ahead of any talks, analysts say.

"The main point for Iran, in my opinion, is not necessarily to derail a meeting between Trump and Rouhani but to increase its leverage ahead of it," said Michael Horowitz, the head of intelligence at the Bahrain-based risk management firm Le Beck International. "By carrying out such a major attack, Iran wants to send the message that the only way to decrease tensions is to comply with its demands regarding sanctions relief."

However, he warned there could be a danger of Iran "overplaying" its hand.

"There will be no political benefit for Trump in a meeting with Rouhani if this meeting sends the message that the U.S. simply surrendered to Iranian demands," he said. (AP)