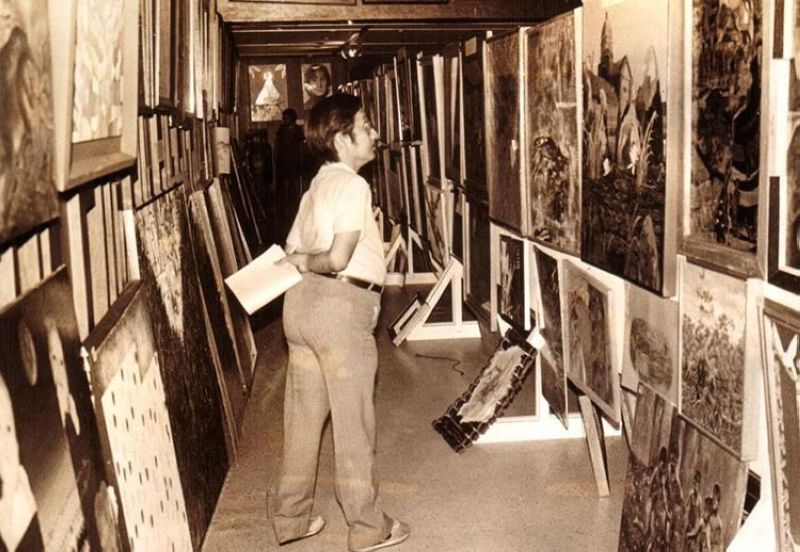 MANILA. MBFI launched the Metrobank Art & Design Excellence (Made) in 1984, then known as the Metrobank Annual Painting Competition, to encourage creativity, motivation, and self-discipline among the young for the country's holistic development. (Contributed photo)

TRACING its humble beginnings in the year 1984, the annual Metrobank Art & Design Excellence (Made) was conceived by late Metrobank Group founder and chairman Dr. George S.K. Ty at a time when the nation was at the throes of economic crisis and socio-political unrest. The Filipino people were in search for meaning and hope beyond the uncertainties at that time. While many took their struggles to the streets, Dr. Ty discovered much promise and potential in Philippine visual arts as an alternate creative bullhorn for people to be heard.

Thirty-five years since, Made has continued to be a platform for the discovery of the most passionate and creative visionaries in the country. To date, the Metrobank Foundation Inc. (MBFI) has recognized more than 400 creative visionaries serving as drivers behind the transformational and uplifting power of visual arts in nation-building; majority of them are now carving significant names in the local and even international art scenes.

But more than a competition that breeds artistic talent, Mad has evolved to become a development program that facilitates a generation of fresh ideas for social development. It has set the benchmark among the country's art competitions as a pioneering corporate social responsibility (CSR) program for the arts.

"The dawn of this annual art tilt can be traced back to an aspiration that took hold 35 years ago: to provide a platform for Filipino artistry to flourish. Over the years, Made has evolved to become a formative platform that enables emerging artists to translate their ideas into masterpieces," said MBFI president Aniceto Sobrepeña in his message.

Unleash the artist within

This year's theme, "Unleash," reflects MBFI's continuing advocacy to seek out and exalt Filipino visionaries -- young individuals who bring vibrancy to the evolving art scene whether they are working with a blank canvas or a space waiting to be transformed.

A new batch of Made awardees is set to be awarded on September 19 at the Le Pavillon, Metropolitan Park in Pasay City. Two grand awardees will receive financial assistance worth P500,000 and "Mula" glass trophy designed by 2009 Metrobank Prize for Achievement in Sculpture (MPAS) awardee Noell El Farol.

Meanwhile, three other finalists for the Oil/Acrylic on Canvas and Watermedia on Paper Categories, Painting Recognition Program, will be given special citations for their remarkable artworks.

Title: "Evanescing Lives from the Homeland"

Tarlac City-based artist Jayme Emille Lucas is the Grand Awardee for the Oil/Acrylic on Canvas Category.

Emerging from the tradition of social realism, "Evanescing Lives from the Homeland" conveys a powerful snapshot of farmers. Deeply influenced by "the kind of environment" that Lucas lives in and to other places where Lucas has been, the work shows the farmers not involved in their back-breaking labor but confronting the gaze of the viewer.

Arrayed on a clearing and against the tall stalks of a sugarcane plantation, the three central figures embody a palpable posture of defiance, ready to tell their plight. Of different ages, they belong to three generations, which suggests how farming is passed on unbroken along familial lines and how the cycle of poverty becomes entrenched.

What makes this work haunting and urgent are the ghostly emanations of those who have passed on but continue to influence the living to continue the struggle. Intensifying the uncompromising stance of the farmers is the sky, with its churning dark clouds, which threatens rain. The symbolism of the impending rain is two-fold: it conveys both nourishment of the earth or its devastation.

Rendered "like a photo taken from the past being forgotten inside an old photo album misplaced and lost in the house," the winning-work makes certain that the story of struggle and resistance of farmers continues to be told.

A graduate of Bachelor of Arts major in Advertising from Tarlac State University, 22-year-old Lucas works as a freelance artist. She hopes to hold an exhibition one day and to create a mural art in an elementary school in Hacienda Luisita which can serve as inspiration to students.

Twenty-three-year-old Grand Awardee Christian Jame Maglente deals with the timely issue of mental health, which seems to disproportionately besiege young people who are still trying to gain a foothold in life. The "blue" in the title points at the literal color of the painting's background while at the same time alluding to the "blues," which is an informal term for extreme sadness or depression.

Depicted in a depressive state, the central figure, mirrored on his left and right sides, crouches on top of a column, as he is consumed by a tumult of thoughts and feelings. His confused interior reality is expressed as an explosion of pigments interspersed with skulls and skeletons, which symbolize the figure's contemplation of mortality and death.

Occasionally, in this complex web of a struggle made visible, flames shoot up, which may be read as a wish for destruction. But fire is also a cleansing agent. Just like the phoenix, the figure may be undergoing a process of purification in order to achieve health, balance, and stability. It is also a comforting notion that the background against which this metaphorical conflagration transpires is a light shade of blue, the color of dawn, of new beginnings.

Through its painfully lyrical examination of the mind in crisis, the work renders in concrete terms the struggle that attends a breakdown and makes a compelling case for intervention.

A graduate of Fine Arts major in Painting from Eulogio Amang Rodriguez Institute of Science and Technology, Maglente plans to create a masterpiece like no other and wishes for other people to have an appreciation about art. 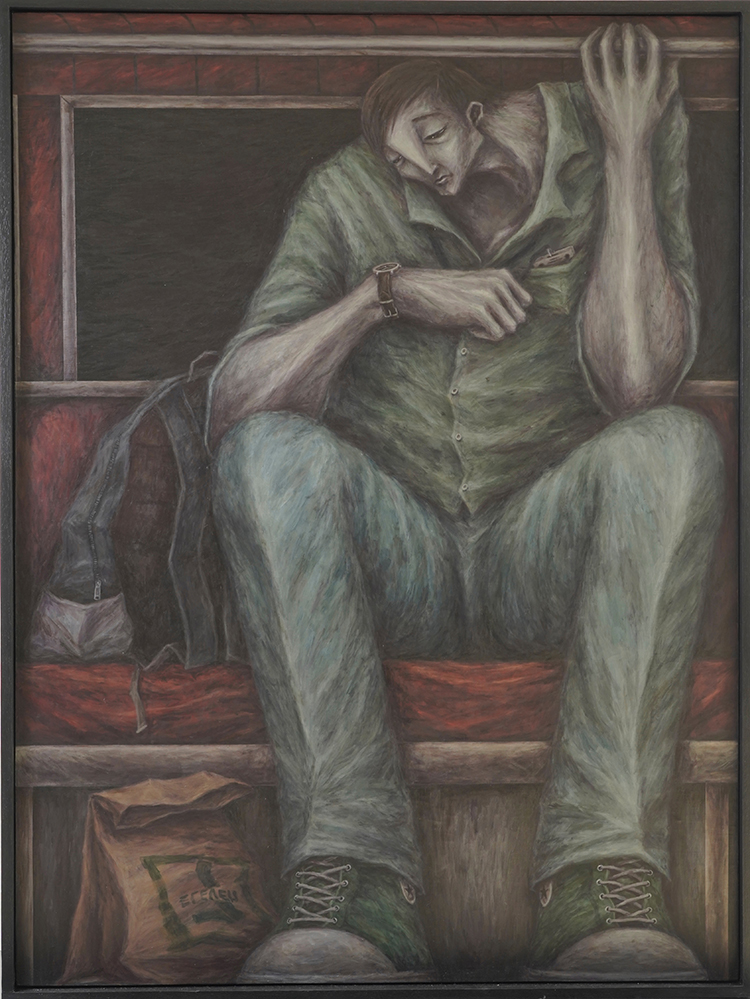 Recipient of Special Citation in the Oil/Acrylic on Canvas category, Christian Cedrick Dela Paz locates the everyman in the familiar setting of the jeepney in 25/7. The title suggests that the 24 hours that constitute a day seem never enough, what with the many responsibilities a common folk has to juggle simultaneously in order to keep body and soul together in an urban place.

This lack of time is symbolized by the man mournfully looking at his watch, with his evidently sad eyes and pursed, downturned lips. Behind him, framed by the jeepney window, is a wash of black, which may be the pre-dawn sky as he rushes for work or the night as he goes home with only a few hours left for rest.

Further emphasizing this lack of time is the paper bag of a convenience store which is open all day and all night. It may be that of the figure or another passenger, which has left it on the floor of the jeepney after hurriedly consuming a meal, because time is not sufficient for a proper sit-down to enjoy it.

25/7, with its dark, brooding color palette, confronts how modernity has robbed man the time to recuperate from the travails of the everyday. One has to make do with the little mercies offered to him while, as the figure in the work by Dela Paz demonstrates, longing for a more enduring form of alleviation.

Dela Paz, 23, plans to hold his own exhibition someday. His goal is to showcase Filipino culture and art to future generations through his works.

Dela Paz is a graduate of Bachelor of Fine Arts major in Visual Communication from Eulogio Amang Rodriguez Institute of Science and Technology. He is currently affiliated to art groups Tuklas 2018 and Door 305.

Upuan, which receives Special Citation in the Oil/Acrylic on Canvas category, by Dave Alcon makes evident the structure of social, political, and economic hierarchies, conveyed by the metaphor of the chair. Found anywhere from classrooms to boardrooms, from government to religious institutions, the chair is a symbol of representation, inclusion, and power and whose association with privilege extends into language.

In the work, stacks of chairs, rendered as line drawing against a black background, crowd into a dense, structure in the bottom two-thirds of the canvas, which eases up in the middle before assuming once again a hectic complexity. From this point, the structure tapers off, assuming the shape of a pyramid. The background opens up as the chairs become fewer and fewer until the pyramid culminates into a golden throne that, because of its color and stylized rendition, becomes the dominant element of the composition.

Stark in its choice of color palette and subject, Upuan is a deceptively simple revelation of the sheer competition necessary to achieve the throne's enviable position, which is paradoxically held up by the chairs that maintain the structure where only the very few, if not one, can reach the top.

Based in Muntinlupa City, 21-year-old full-time visual artist Alcon's works usually tackle political and economic crises, and environmental issues. In the future, Alcon wishes to continue creating artworks and dreams of becoming a successful and well-known artist. He earned his Bachelor's degree major in Advertising from the Technological University of the Philippines Manila.

Art has been used as a vehicle to convey anti-war sentiments, as exemplified by Walang Hihigit Pang Sandata, recipient of Special Citation for Watermedia on Paper category, by Arman Jay Arago. Rendered in monochromatic green, the work is dominated by a central figure who has abandoned his military roots (as evidenced by his fatigue which now pools on his right leg) and now wears layman clothes as he earnestly holds a Bible to his chest.

With his head slightly tilted upwards in an attitude of expectation and his left leg having taken a decisive step, the figure is depicted ready to take a different journey from that of his previous life: to minister God's Word.

As if moving towards the viewer, the figure straddles over the implements of war -- grenades, missiles, automatic rifles that constitute a veritable still life of destructive force -- that have caused countless loss of lives as well as grief on the part of those who have been left behind. A telling detail is how a strong light bathes the left side of the figure, which symbolizes Divine Providence, illuminating the path towards his new life.

A member of Linang Art Group, 27-year-old Arago is a graduate of Bachelor of Technology major in Drafting Technology from the University System of Rizal- Morong. He dreams of becoming a national artist one day.

For over three decades now, Made has set the benchmark among the country's art competitions, raising the general public's appreciation for the arts through exhibits and lectures and has long served as the career launch pad of the country's most admired contemporary artists and sculptors. Among its past awardees are Elmer Borlongan, Mark Justiniani, Jan Leeroy New, Salvador "Buddy" Ching, and Andres Barrioquinto. (PR)