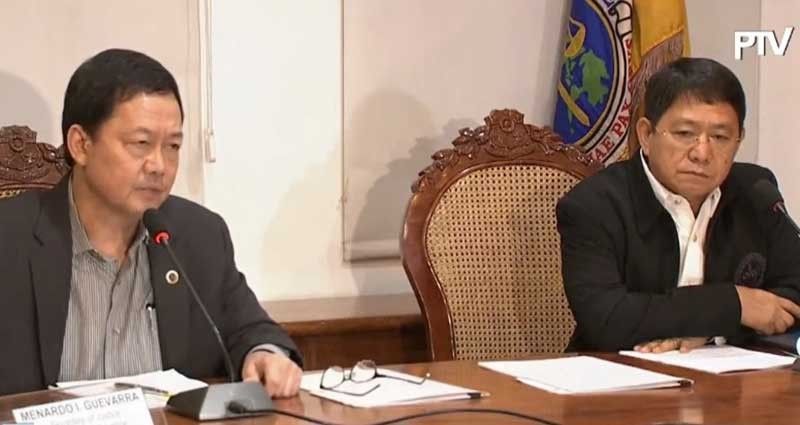 (UPDATED) The joint committee reviewing the implementing rules and regulations (IRR) for the granting of good conduct credits to prisoners has submitted the revised rules, but asked for more time to complete its review of the uniform manual and guidelines.

Guevarra said the new IRR clarifies who qualifies for GCTA, defines heinous crimes, requires the posting online of the list of prisoners who may be entitled to time allowances, and provides guidelines on the computation of GCTA credits.

Also among the salient features of the draft revised IRR is the non-extinction of criminal liability in case of grant to disqualified prisoners and the transitory provision clarified effect of retroactivity rule.

On the arrest of the GCTA-freed convicts, Guevarra said they will come up with a cleaned-up list for the benefit of the Philippine National Police that will conduct the manhunt and arrest those who refuse to heed President Rodrigo Duterte’s order.

Guevarra said the corrected list will be completed with photos and will be given to the PNP before September 19, the end of the 15-day ultimatum given to the freed convicts.

Año said as of Monday afternoon, a total of 612 convicts have surrendered to the police, BuCor and other law enforcement agencies.

Guevarra said under the law and under existing jurisprudence, the released convicts have not completed the service of their sentence and if they refuse to surrender, they are committing the offense of evasion of sentence.

Duterte earlier said that after 15 days, those who have not surrendered would be considered fugitives and would be arrested.

It was revealed in a Senate probe on the irregularities in the implementation of the GCTA that there were several double entries and incorrect entries on the list such as the inclusion of alleged pork-barrel scam queen Janet Lim Napoles who, based on the Bureau of Corrections (BuCor) records, was convicted of rape.

RA 10592, or the Expanded GCTA Law, bars recidivists, habitual delinquents, escapists and those charged with heinous crimes from availing of any kind of time allowance.

The revised IRR adopts the definition of heinous crimes under Republic Act No. 7659 or the death penalty law and refers to the Supreme Court declaration on what constitutes heinous crimes.

Guevarra said those who were convicted of heinous crime prior to the enactment of the Expanded GCTA Law in 2014 are still entitled to GCTA, but only under the old provisions of the Revised Penal Code.

He said the 1,914 convicts who have been released since 2014 and have surrendered to heed President Rodrigo Duterte's recall order might be released again if they are not covered by any exclusion.

Año said heinous crime offenders may still be released before their sentence is over through clemency, presidential pardon and parole.

Guevarra said the GCTA will be computed monthly but would only be implemented during the 2nd, 5th, 10th and 11th year of the convict’s detention.

“For the last two weeks, we have been so beset with controversies and characterized by numerous Senate hearings that actually discovered some anomalous practices in the Bureau of Corrections. We have now defined clearly the provisions of the IRR to prevent again these kind of anomalies and controversies,” said.

“This revised IRR shall be implemented and make sure that deserving PDLs (Persons Deprived of Liberty) shall be given the GCTA and those who do not qualify shall not be given such privilege. We have resolved these issues and we can have peace of mind,” he added.

issued Joint Department Order No. 002 on Thursday, September 12, granting a 60-day extension to allow the Joint DOJ-DILG Committee on GCTA to complete its review and revision of the manual and guidelines.

The manual provides guidelines on the computation of GCTA credits.

Processing of GCTA applications were suspended pending the review of the IRR and uniform manual and regulations.

Guevarra and Año, however, made it clear during the press conference Monday that implementation of RA 10592 was not suspended and PDLs continued to earn GCTA credits on a monthly basis while the review was being conducted.

The grant of GCTA is the subject of an inquiry by the Senate and an investigation by the Ombudsman, which has placed 30 Bureau of Corrections (BuCor) officials under suspension for six months without pay. (SunStar Philippines)