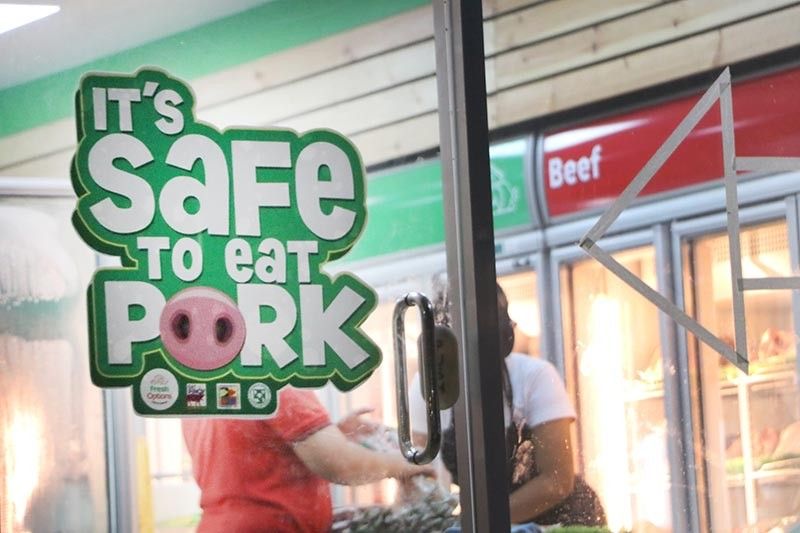 PAMPANGA. Amid the threat of African swine fever and the ban on the entry of live hogs in Pampanga, a meat shop posted on its door that “it’s safe to eat pork”. (Photo by Chris Navarro)

PAMPANGA Governor Dennis "Delta" Pineda has banned the entry of all live pigs into the province to protect the multi-million-peso hog industry and meat processors from the threat of the African swine fever (ASF) and to safeguard public health.

Pineda imposed the ban through Executive Order No. 34 that he signed on September 13. He issued the prohibition although there has been no ASF outbreak in the province.

Swine inventory in Pampanga totaled 51,415 metric tons live weight in 2018, making it the third highest producer in Central Luzon after Bulacan (259,677 MT) and Tarlac (98,591 MT), according to data from the Philippine Statistics Authority.

The ban is temporary and will be lifted based on the advice of the Bureau of Animal Industry, a copy of the EO 34 showed.

"With respect to pork and pork-related products, only those with National Meat Inspection Service (NMIS) seal or with appropriate Certificate of Meat Inspection issued by NMIS shall be allowed entry into the province, with the exception of those coming from ASF affected areas," a part of the three-page order read.

The Department of Agriculture confirmed that laboratory tests validated ASF in several samples taken from Rizal and Bulacan, prompting the culling of hogs there.

Through EO 34, Pineda also created the Pampanga ASF Task Force, which he tasked to make a contingency plan.

Its members are the veterinary quarantine station officer of the DA-Bureau of Animal Industry, Provincial Quarantine Officer of the Bureau of Quarantine of the Department of Health, Philippine National Police provincial director, provincial health office, president of the Liga ng mga Barangay and the Provincial Disaster Risk Reduction and Management Office.

Two weeks ago, the governor issued a memorandum to mayors to take preventive actions against ASF as advised by the DA through Administrative Order No. 04-2019 on food safety measures and veterinary quarantine, Provincial Administrator Charlie Chua said. (PR)