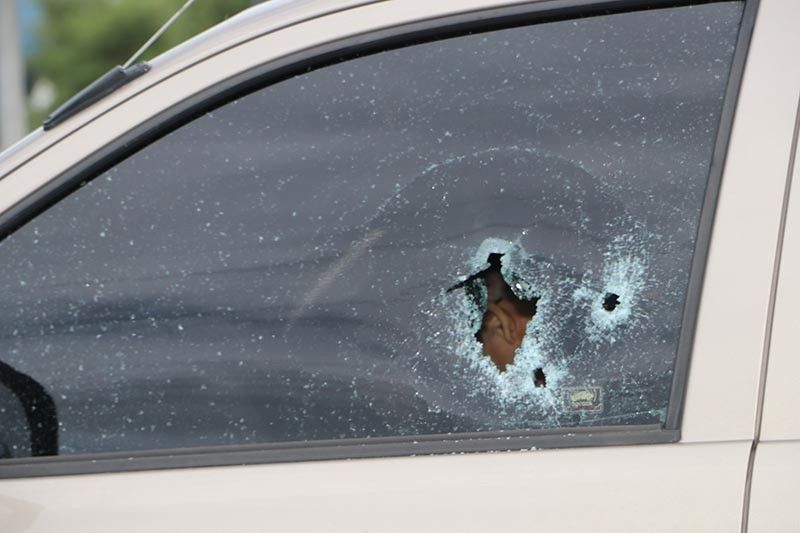 PAMPANGA. A still unidentified man lies face down at the steering wheel of a 4x4 pick up truck after an unidentified motorcycle-riding man opened fire at the victim along Jose Abad Santos Avenue, City of San Fernando Monday noon, September 16, 2019. (Photo by Chris Navarro)

ONE person died while another was in critical condition after two separate shooting incidents perpetrated by still unknown assailants along major roads of the City of San Fernando Monday morning, September 16.

The victim, identified as Nelson Pineda, an employee of Universal Robina Corporation, was reportedly onboard his Mitsubishi Lancer when the perpetrator, who was driving a black sports utility vehicle, opened fire at him, Gamido said.

Gamido said the victim, who sustained multiple gunshot wounds, was in the intensive care unit of an undisclosed hospital as of Monday afternoon.

“We will be looking into the identification of the suspects and the possible motive once we are able to talk to the victim,” he said.

Meanwhile, another victim was rushed to a nearby hospital while another was declared dead on arrival in a separate shooting incident that transpired along the Jose Abad Santos Avenue near the North Luzon Expressway interchange before noon Monday.

Gamido said a man onboard a motorcycle opened fire at the still unidentified victims while they stopped at a red light at the southbound lane of the said major thoroughfare.

Armamento, for his part, reported that an unidentified man on board a pick-up truck had just left the Regional Trial Court of Guagua, Pampanga and was on his way to Angeles City.

The still unidentified victim had stopped at a red light when a man approached and shot him several times. The victim died on the spot, Armamento said.

“We will immediately launch an investigating team to probe these incidents and if it is connected to the shooting incident shortly before this and most importantly, we will ensure that the suspects will be penalized,” Gamido said. (With reports from Ric Sapnu)