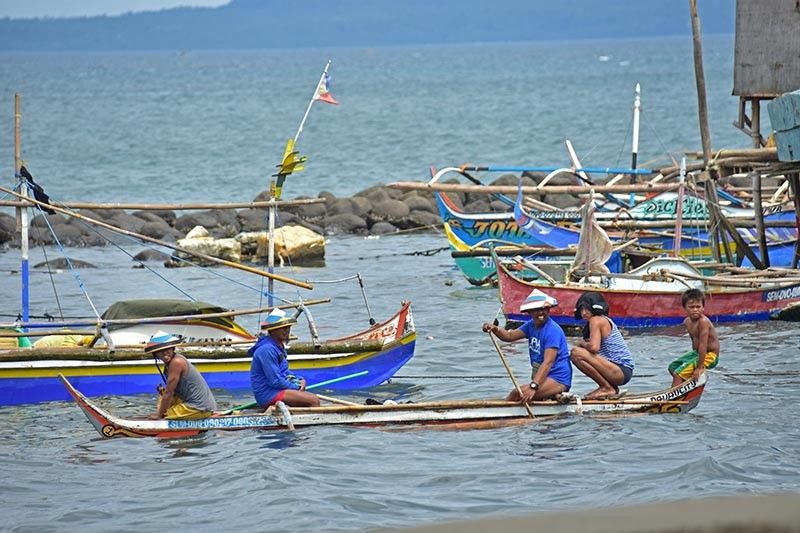 DAVAO. A group of fishermen rides a small boat as they head to their fishing boat docked few meters away from the seawall in Barangay 23-C Isla Verde, Davao City. (Macky Lim)

FISHERFOLK in Davao City who were affected by huge waves brought by southwest monsoon are continuously seeking the support of local and national governments after claiming they did not directly receive any assistance from them.

Borja said the City Agriculturist's Office (CAO) conducted evaluation on their situation. But he said the local fisherfol are uncertain if they would even receive any assistance from the government due to the delay of the assistance that was promised to them.

He said FFADC, a local fisherfolk association with almost 8,000 members from 24 coastal barangays and upland agri-fisheries in the city, continues to lobby its concern to the local government since they cannot conduct fishing activities due to huge waves.

"Kung naa lang si Mayor Sara (Duterte-Carpio) diria ug makadungog sa among panawagan, maguol gyud to (If only Mayor Sara was here, she would be worried to hear our plight)," Borja said, thanking the local government for its assistance.

While waiting for any assistance, he said FFADC is pushing for an alternative program called "Isda Para Sa Masa," wherein fisherfolk are selling their stocks of imported frozen fishes directly to the consumers.

He said the prices sold by the program was twice cheaper compared to those sold in public markets due to the absence of middlemen.

Bureau of Fisheries and Aquatic Resources-Davao Director Fatma Idris, meanwhile, urged them to apply for a loan with a maximum amount of P25,000 for each beneficiary. She said the loan can be paid until three years with zero interest.

She also encouraged fisherfolk, who are temporary barred from fishing, to resort to "land-base" livelihood such as farming. (Vince Eugene Suaner, UM Intern/With reports from Ralph Lawrence G. Llemit)