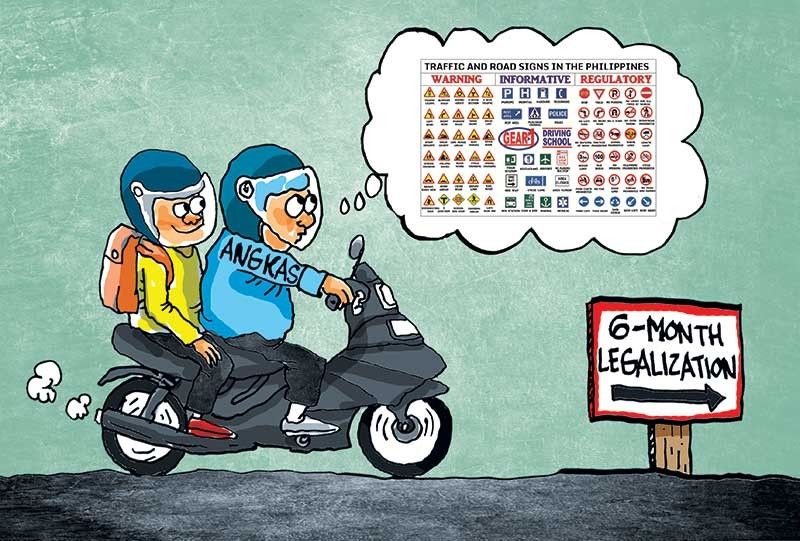 WE ARE now downhill to the end of the six-month dry run of the app-based motorcycle taxi Angkas operations.

To recall, in 2017, the Department of Transportation (DOTr) tried to rid the streets of Angkas, citing Republic Act 4136 or the Land Transportation and Traffic Code, which prohibits two-wheeled vehicles from being used as public utility vehicles (PUV) for safety issues.

Angkas managed to secure a court injunction preventing government from implementing an order against its operations. It directed the DOTr and the Land Transportation Franchising and Regulatory Board (LTFRB) to stop “interfering” with Angkas operations.

The matter was raised to the Supreme Court, which issued a temporary restraining order against the court ruling.

Angkas, however, found its lawmaker ally in then congressman Winston Castelo who pushed for its legalization. He had bowed out of congress, but managed to push for a test run for Angkas to assure its naysayers that its operations were safe.

The six months will determine the fate of Angkas. If it passes the test, its legitimization will come via amending law House Bill 6909 to Section 458 of RA 7160 or the Local Government Code and Section 7 of RA 4136. To be observed will be its service performance in aspects of safety, convenience and efficiency.

On Sunday, Sept. 15, 2019, hundreds of Angkas drivers trooped to the “Angkas Safety Fiesta” at the Plaza Independencia in Cebu City. Into the final phase of the dry run, the drivers now find it crucial to reiterate their call for legitimization.

What are the promises that Angkas demonstrated in the last months of the dry run?

During Castelo’s visit last May at the Angkas training center in Taguig City where he posed as an ordinary passenger, he was offered a head cap and a face mask and was shown a leaflet with safety reminders. The bikers also wore reflectorized vests with handle straps for passengers to hold on to.

Angkas assures it has a 24-hour emergency team to respond to any road accident. Should there be poor hygiene among its bikers or overpricing, passengers can raise their complaints to a quality control team.

It’s an assurance that comes at a time when around 50 percent of road accidents involve motorcyles.

“This is one of the big reasons why the government was so resistant to allow a service like ours, but we’ve shown that with training and the system that we have in place, we are able to maintain a 99.997 percent safety record,” Tham said.

“With the screening and training that we provide our drivers for free, we train them on basic street rule: traffic lights, road awareness, a lot of these things. That’s something that we are very proud of doing,” she said.

We do hope a significant sector who thinks otherwise about Angkas will also speak up. That way, the discourse will leave no stone unturned.

Although now, some sort of regulation is a sound proposition. There will always be that informal sector of habal-habal motorcycles plying our streets with no assurance of safety for both passengers and drivers.