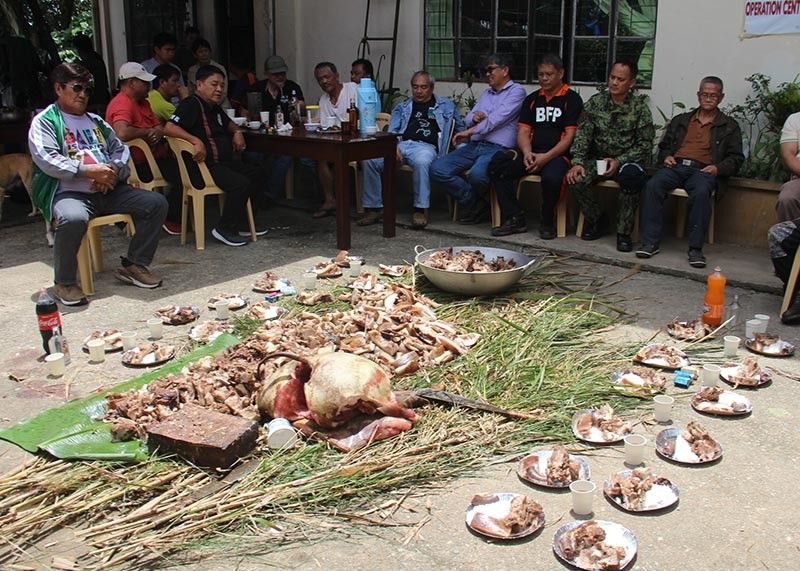 FOR THE DEPARTED. The Municipal Government of Itogon offered prayers and butchered native pigs on Sunday, September 15 marking a year after a landslide hit the town during Typhoon Ompong last year. (Lauren Alimondo)

ITOGON, Benguet -- Past disaster such as Typhoon Ompong have taught the people of this town a big lesson.

“Because of what happened during Ompong, now the people learn something and they voluntarily evacuate themselves when typhoon and rainfall occurs,” addressed Palangdan during the simple program of the commemoration held on Sunday.

Palangdan added if only the people heeded the call for evacuation, the huge number of casualties could have been prevented.

More than 100 people died in the Cordillera region on September 15, 2018 when typhoon Ompong lashed the country. More casualties were recorded in Itogon after they were buried in the landslide.

On Sunday, Itogon marked the one year anniversary of the super typhoon were three native pigs and a ritual were offered for the souls of the casualties and prayers to spare the town from another tragedy from happening anew.

"We are conducting the ritual in observance of our cultural heritage in the Cordillera. We are all gathered here to thank all those people who in one way or another help our municipality to rise again," he added.

He urged stakeholders to use the tragedy as basis to strengthen protection for themselves against disasters.

Engr. Michael Tauli, incident commander during the typhoon and resident manager of Itogon Suyoc Resources Inc. said the past remain a big lesson when authorities call for evacuation, people should follow.

But the problem on relocation remain for the 700 families.

Palangdan updated the P20 million for the purchase of lot and housing materials provided by the National Housing Authority awarded to the town is still not utilized. Several lands were recommended for relocation site but failed the findings of the Mines Geosciences Bureau.

Meanwhile, he added there are five still missing bodies that were not found.

Previously, the MGB-Cordillera of the Department of Environment and Natural Resources (DENR) said the landslide which occurred in level 070, Barangay Ucab in Itogon was not caused by mining.

For the whole month of August last year, Baguio and Benguet experienced continuous monsoon rains which made the situation worse as the huge amount of rainfall during Typhoon Ompong caused the area to erode.