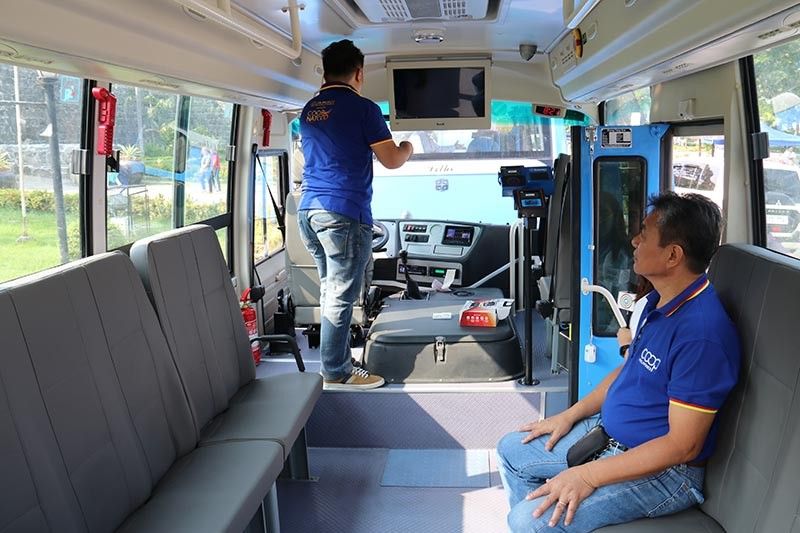 MODERN FEATURES. Each bus-jeep is equipped with a security camera, a global positioning system, a speed limiter and a dash camera, among others. (Sunstar Photo / Amper Campaña)

For its first two months of operation, passengers will ride for free. But after that, the fare will be P10 minimum, or 20 percent higher than the existing fare.

According to Macario Quevedo, the coop’s chief executive officer, the three routes are Talamban-Ayala-Colon and back, Lahug-Ayala-SM and back and Bulacao-Colon-SM and back.

Four Beeps have been assigned to each route. Beeps will start plying the first two routes either on Tuesday, Sept. 17, 2019, or Wednesday, Sept. 18. The Beeps will travel during morning peak hours and afternoon peak hours into the night.

Quevedo said they are still looking for persons with a professional driver’s license and who can drive a six-wheeled vehicle to drive the Beeps that will ply the Bulacao route.

Elnar said the program will be implemented in stages to give operators time to replace old passsenger jeepneys with new ones.

The Beep has a closed-circuit television camera, a global positioning system, a speed limiter and a dash camera. among others.

Although cards will be used as a mode of payment once the coop will start collecting fare, the Beep will also have a passenger assistance officer on board. The cards can be purchased in coop branches and authorized outlets.

Quevedo said they plan to purchase 200 Beep units that will ply the three routes by June 2020, the deadline to replace passenger jeepneys with units that conform to the Euro 4 emission standard.

Quevedo said the coop also has 700 franchises from small operators of old passenger jeepneys who have joined the coop.

Cebu City Councilor Joel Garganera, who represented Mayor Edgardo Labella during the launching of the PeoplesJeep on Monday, Sept. 16, said it was about time that old passenger jeepneys plying the metro’s streets were replaced.

Garganera also saw the need to discipline public utility drivers to make sure they obey traffic laws like picking up and dropping off passengers on designated areas.

Around 300 modern PUVs that include hybrid point-to-point buses, modernized taxis and solar-powered e-jeepneys have been plying the streets of Metro Cebu and Mactan Island since the LTFRB and the Department of Transportation kicked off the “One Time Big Time” simultaneous nationwide launch of the PUVMP last July 11, 2019. FROM PAC OF SUPERBALITA CEBU / PJB