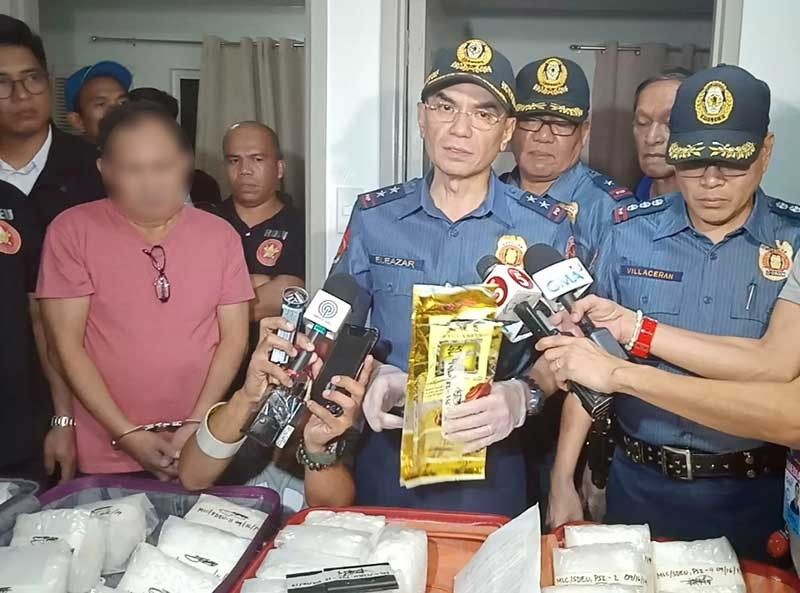 National Capital Region Police Office (NCRPO) Director Guillermo Eleazar said Carlos serves as the right hand of a convicted drug lord inside the New Bilibid Prison (NBP) and is in charge of the storage and distribution of the illegal drugs.

Eleazar also said the suspect was connected to Edgardo Alfonso, the drug suspect who was killed after resisting arrest during a drug bust on Sunday in Barangay Tramo, Quezon City.

Over P27 million of illegal drugs were confiscated during the said operation. Alfonso allegedly served as one of Carlos’ distributors.

"This is proof that although the drug lords are already detained, they are able to operate and push transactions by giving instructions to their henchmen outside the jail," said Eleazar.

Carlos was arrested when anti-narcotics police served a search warrant around 7:40 p.m. on September 16 in his condominium unit in Sorrento Oasis Residences in Barangay Rosario, Pasig City.

“(The) Suspect is a high-profile drug personality and was among major targets of NCRPO under a case operational plan,” said Eleazar.

“He is a main player of a syndicated organized gang engaged in illegal drug trafficking operating in Metro Manila, Region 3 and Calabarzon. He is connected to drug personalities convicted and now serving sentence at the National Bilibid Prison, Muntinlupa City,” he added.

Eleazar said Carlos was arrested sometime in year 2000 by the Mandaluyong Police Station and charged with an illegal drug case but he was acquitted by the court and has continued his illegal activities.

A criminal complaint for violation of Section 5 and 11 of Republic Act 9165 (Comprehensive Dangerous Drugs Act of 2002), RA 10591 (Comprehensive Law on Firearms and Ammunition) are being prepared against Carlos.

Eleazar commended his men for this accomplishment which he said was the “biggest” job so far of the NCRPO.

“Our drug enforcement agencies should take a deeper look as to how and why such volumes of illegal drugs enter the country and are even distributed in the heart of Metro Manila. On our part, we will continue to put pressure on these drug syndicates by arresting their couriers and distributors in the Metropolis,” he said.

“The volume of shabu we just confiscated in our past two operations is a wake-up call. It tells us that the war against illegal drugs should continue to be relentless and aggressive. The war is far from over," he added. (SunStar Philippines)