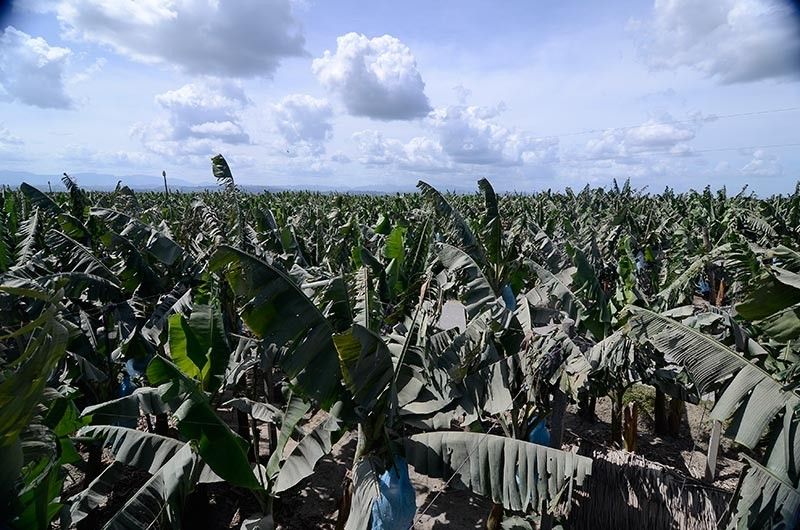 DAVAO. In 2015, over 15,000 hectares of Cavendish banana plantations were hit by the Panama Disease. By the end of 2019, the Department of Agriculture in Davao Region is expecting the numbers may have doubled in the last four years. (SunStar file photo/King Rodriguez)

AN OFFICIAL of the Department of Agriculture (DA) in Davao Region said areas affected by the Fusarium wilt, also known as the Panama disease, may double by this year.

Virgelio Gutierrez, a science research specialist of the DA-Davao Regional Crop Protection Center, said based on their latest survey, as of 2015, there are a total of 15,507 hectares (has.) of banana plantations in Davao Region that have been affected by Tropical race 4 (TR4), a strain of the fungus Fusarium oxysporum f. sp. cubense (FOC) that causes the Panama disease.

He added of the areas affected, 10,807 hectares are owned by small banana growers.

“We are expecting the area affected by the Panama disease will become bigger because many of the plantations are near the river,” Gutierrez said.

He said when it rains and the river overflows, this may cause flooding, which could serve as a carrier of the Panama disease, which is soil-borne.

Gutierrez the rain in recent months has caused flooding in certain areas in Davao Region and they fear that this may have further spread the disease in other plantations.

He said they are closely monitoring banana plantations in Kapalong, Davao del Norte after the municipality experienced several floodings in the past few months.

“Sometimes you are really at a loss. You ask for rain and when it rains, you get a flood. Once there is a flood, it will carry the fungus,” Antig said.

Gutierrez said that they are currently conducting profiling of areas affected by the Panama disease to see how it has grown since 2015. To date, they have conducted profiling at Davao del Norte and Compostela Valley. He said they expect the latest data to come out by October.

“Based on our estimates, areas affected by the Panama disease in Davao del Norte will more than double since areas here experienced floods,” he said in Filipino.

Currently, there is no cure to the Panama Disease. However, Gutierrez said it is manageable through good agricultural practices, proper information, and the use of biological agents.

In a statement, Department of Science and Technology-Philippine Council for Agriculture, Aquatic and Natural Resources Research and Development (PCAARRD) said, “The pathogen enters through the roots, progresses through the stem, and causes serious damage to the plant. The TR4 strain of the fungus is known to infect the highly susceptible Cavendish bananas.”

According to the Food and Agriculture Organization, “If unchecked, Fusarium caused by Foc TR4 can wipe out an entire plantation. The pathogen can be transmitted through planting materials, movement of infested soil particles through any means such as shoes, vehicles or through the water. The fungus can remain dormant in the soil for decades.”