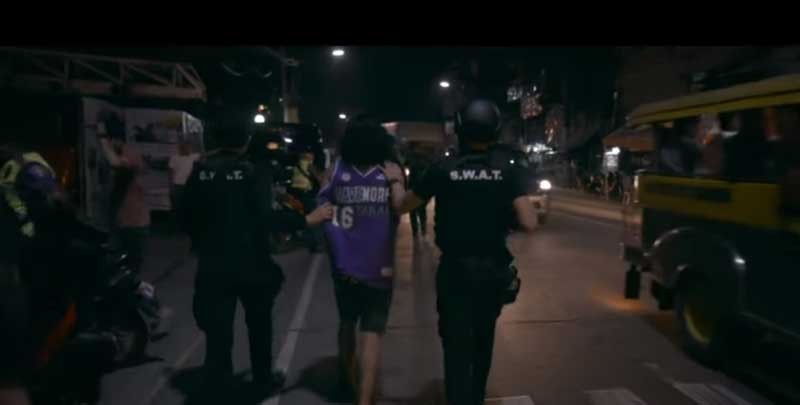 A scene from the "On the President's Orders" documentary film on the Duterte administration's war on drugs. (Screenshot from the film's trailer)

MALACAÑANG on Tuesday, September 17, slammed the "false and baseless" narration of President Rodrigo Duterte's brutal drug war in a documentary film that will be aired in the United States.

British director and producer James Jones and French director and cinematographer Olivier Sarbil have teamed up to produced a documentary film titled "On the President's Orders," which focuses on Duterte's deadly campaign against suspected drug offenders in the Philippines.

In a statement, Presidential Spokesperson Salvador Panelo said the Palace was "vexed by the continuous spread of disinformation against our country’s campaign against illegal drugs and criminality."

"Foreign audiences have been saturated with false and baseless narratives relative to the Philippine government's anti-narcotics approach, specifically on the nature and number of deaths arising from police operations against it," the Palace official said.

"Based on the trailer of - as well as the commentaries on - the American docufilm, "On the President's Orders," it appears that the same is the latest addition to these unmitigated vilifications. Even the title of the docufilm reeks with malice, making it appear that the drug-related deaths were done upon the orders of [Duterte]," he added.

Jones and Sarbil described the "On the President's Orders" as "the searing story of President Duterte's bloody campaign against drug dealers and suspected drug users and addicts in the Philippines, told with unprecedented and intimate access to both sides of the war - the Manila police and an ordinary family from the slum."

On the website, the producers noted that those who are caught on camera are "the victimised slum communities and the police squads blithely executing their countrymen from a perverse moral high ground."

Panelo lamented that the "derogatory and biased" documentary film was used to create a "black propaganda" against the President and his administration.

"We find this derogatory and biased, if not outright fiction," he said.

"It is obvious that the film medium is riding on the coattails of the President's international popularity and success, and is being used as a medium to espouse a one-sided information bordering to black propaganda aimed at gullible foreign audiences who know little or zero-knowledge about the Philippines and its government," he added.

Panelo also claimed that the "On the President's Orders", together with its so-called "cinematic" investigation on drug-related deaths, "evidently has been deliberately overdramatized for the purpose, apart from putting the Philippines in a bad light, of creating a better cinematic experience for its audience."

He stressed that in creating a film, it was easy to select "fractions of video clips or soundbites" that serve the purpose of the filmmakers in "falsely portraying a dangerous Philippines and a murderous government while omitting scenes that reflect the opposite."

"Moviegoers are more inclined to watch a thrilling film that depicts a country as menacing instead of a lackluster motion picture showcasing its progress and development," Duterte's spokesman said.

Panelo then cautioned the potential viewers of the "On the President's Orders" to be circumspect in evaluating the "truthfulness" of the film.

He also informed them that Duterte's drug war is "anchored primarily on national security and public safety."

"Those who will watch the movie is advised and informed that the Philippines is an archipelago where the illegal drug trade is a billion-peso industry, in that 97 percent of small villages which we call barangays, have or had already been infiltrated," Panelo said.

"Three years to the war on drugs and residents in the country now feel safer and secure with seven out of 10 Filipinos being satisfied with the way President Rodrigo Roa Duterte handles the campaign," he added.

Panelo likewise reiterated "for everyone’s information, especially for those who do not reside in the Philippines," that drug-related killings in the Philippines are "absolutely not state-initiated nor state-sponsored."

He maintained that alleged drug suspects died either because of their resistance from arrest or execution initiated by drug syndicates.

"The President, as strict enforcer of the law, does not tolerate abusive police officers. They are not – and will never be – exempted from administrative sanction and criminal prosecution should there be an abuse on their part. As he stated in his first State of the Nation Address, those who abuse their authority will have hell to pay," Panelo said. (SunStar Philippines)