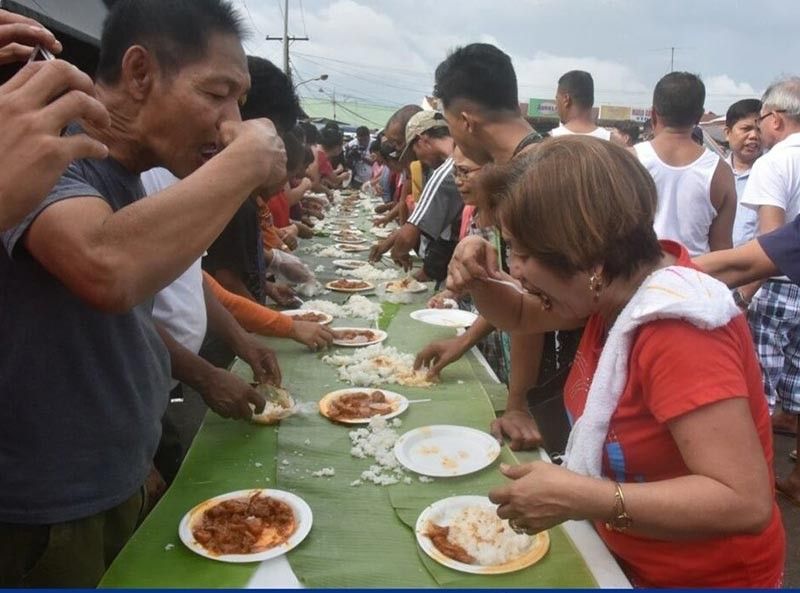 A GROUP of meat vendors in Guagua held Monday, September 16, a pork boodle fight to send a message of protest against Mayor Dante Torres's memorandum order that bans unmarked live hogs and cattle that have not been inspected but being sold in the town's public market.

This came after an alert warning was issued by the Department of Agriculture and National Meat Commission of the possible entry of live pigs affected by African Swine Fever (ASF) in the province.

The memorandum states that "all slaughtered hogs and large cattle at the Guagua Public Market should bear the mark of inspection by the accredited National Meat Inspection (NMIS) inspectors."

Amante Ramon, spokesperson of the meat vendors group, said pork meat and pork products they sell are safe for consumption.

According to him, their group tried to reach out to the local government to secure their pork products with a stamp of the seal from the NMIS, but unfortunately, their request was declined.

Municipal Meat Inspector Roberto Pring said the vendors' request was not granted for not complying to the instructions given to them by the Office of the Mayor.

Ramon said the vendors do not want to use the new slaughterhouse provided to them by the local government in San Rafael because they prefer to use the old one located in Sto. Niño that was recently shut down.

Recently, the Department of Environment and Natural Resources (DENR) called the attention of the Municipal Government of Guagua, reiterating its February 14 order to stop operations of the slaughterhouse of the town.

Provincial Environment and Natural Resources Office (Penro) officer Laudimir Salac, in a September 9 letter to Mayor Dante Torres obtained by SunStar Pampanga from a reliable source, said the old slaughterhouse "should remain non-operational" due to non-compliance of existing rules and regulations.

Last February 14, the DENR-Penro, together with representatives from the Environmental Management Bureau (EMB), issued a notice of violation and a cease and desist order against the slaughterhouse. The orders were received by the municipal administrator of Guagua and the president of the association of the slaughterhouse.

An earlier inspection revealed that the slaughterhouse had no environmental compliance certificate.

The inspection team also found five other sanitary violations like the lack of disposal bins and septic tank. The slaughterhouse was also allegedly discharging waste water into the Guagua River, which is in violation of the Clean Water Act.

The DENR reiterated its order in line with its efforts to rehabilitate the Manila Bay. Guagua River is one of the dozens of waterways that drain into the greater Manila Bay.

Torres said this is the reason why the local government of Guagua funded a new slaughterhouse for its vendors.

Torres said the new slaughterhouse project in Barangay San Rafael was a pre-existing project of the previous administration before he assumed office in 2013.

Moreover, Torres made it clear that he already asked the vendors to maximize the slaughterhouse provided to them by the local government.

According to Torres, he will not tolerate the incorrect disposition of the vendors.