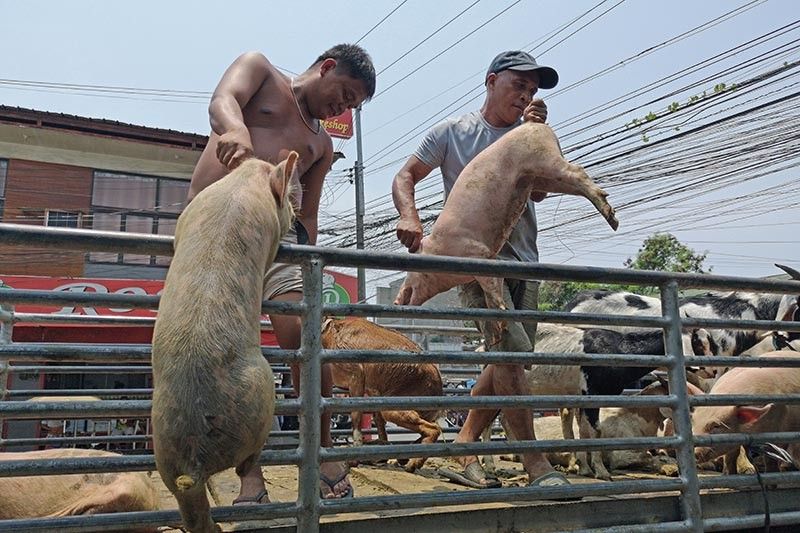 DAVAO. Two men unload hog from a truck in front of a livestock enclosure stall in Agdao Public Market in Davao City. The Davao City Council has filed a resolution yesterday banning the importation of pork outside the city as precautionary measure of the swine fever outbreak. MACKY LIM

A RESOLUTION was filed at the 19th Davao City Council, on Tuesday, September 17, urging the temporary ban of all swine products from Luzon, as a contingency measure to prevent the entry of the African Swine Fever (ASF) virus in the city.

Ralph Abella, committee head on agriculture and food, filed a resolution requesting the City Mayor of Davao City to temporarily ban the entry of swine, pork, pork-related products and pork by products (edible and non-edible), whether raw, processed or cooked, including but not limited to frozen boar semen from the entire island of Luzon and other ASF-affected areas.

Abella’s proposed resolution, which was later approved by the Council, came a day after the Bureau of Animal Industry (BAI) reported that the ASF has reached outbreak levels in some parts of the country. Agriculture Secretary William Dar, however, contradicted BAI’s statement.

The councilor said the approved resolution was a requirement before the mayor could sign an executive for the total banning of all pork products from Luzon.

Earlier, the city government created an ASF task force which will have the support of technical support teams that will be responsible for the preservation and protection of the city’s swine industry, namely, the Rapid Action Team, Surveillance Team, Quarantine Team, and the Census Team with various agencies and departments as members.

Acting Mayor Sebastian Duterte, previously said there is a need to create a body that would look into the formulation of appropriate policies and implementation of programs to protect the public and the swine industry from the threats of ASF in the city.

Abella, meanwhile, said there is no expected price increase in meat products sold in the city.

He said the resolution would further boost the city’s measure in ensuring that ASF will not affect the hog industry in the city.

The resolution was supposed to be passed on September 10. However, the council was early adjourned after an earthquake struck the city.

Abella also filed a resolution, which was also approved, requesting the City Mayor to temporarily prohibit swill (lamaw) feeding and order restaurants, food chains, and malls in the city to temporarily discontinue the giving away and selling of food waste.

Department of Agriculture said that swill feeding is a carrier of the ASF.

“Although pwede man gihapon ta magpakaon og lamaw. Pero dapat dili isagol ang baboy aron malikayan ang pagpasa sa virus (Although swill feeding is not totally prohibited within households. But we have to ensure that we do not mix it with pork products to avoid the transmission of virus),” Abella said.