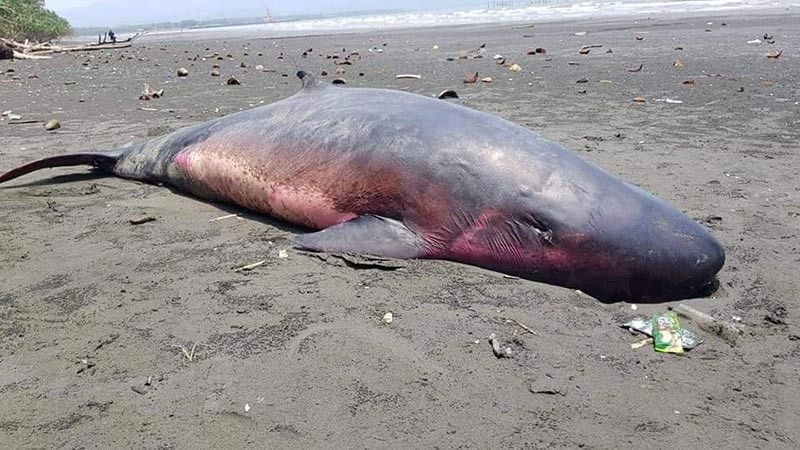 ANOTHER Pygmy Sperm whale was found dead along the coasts of Tagum City, Davao del Norte making it the fourth whale of its kind to be washed in the coastlines of the Davao Gulf this year.

He said the whale died due to “dehydration starvation”.

“It drowned due to being caught in the tidal flats. Overheat exhaustion, gave up. The foam out the blow hole and foamy lungs [sic],” Blatchley said in his Facebook post, adding there was plastic found in the dead whale’s stomach during necropsy.

He said the cause of the whale’s death might be due to dynamite fishing, which he said is rampant in rural areas.

“As per diver here in Davao ‘If it was found in Tagum, maybe dynamite (is) probably the cause’,” Blatchley said in a text message to SunStar Davao.

He said the practice of dynamite fishing has advanced to another level to avoid being detected by authorities.

“They use long wires to detonate the dynamite when it is in the deep. Not like the old fashion ways that will explode on the surface,” Blatchley said.

He said the practice of dynamite fishing to catch fish is quite common off the coast of cities of Tagum and Panabo.

He added that the local government unit, including the villages must be strict in enforcing Republic Act No. 10654, which prohibits dynamite fishing.

Meanwhile, he said the recently-found dead whale is the seventh marine animal death in Davao Region. Majority of the cases were due to plastic ingestion.

He said the number did not include two dolphins which were not retrieved.

Blatchley added that while information education in waste segregation must be conducted, he said enforcement of existing laws pertaining to the Solid Waste Management Act must also be enforced.