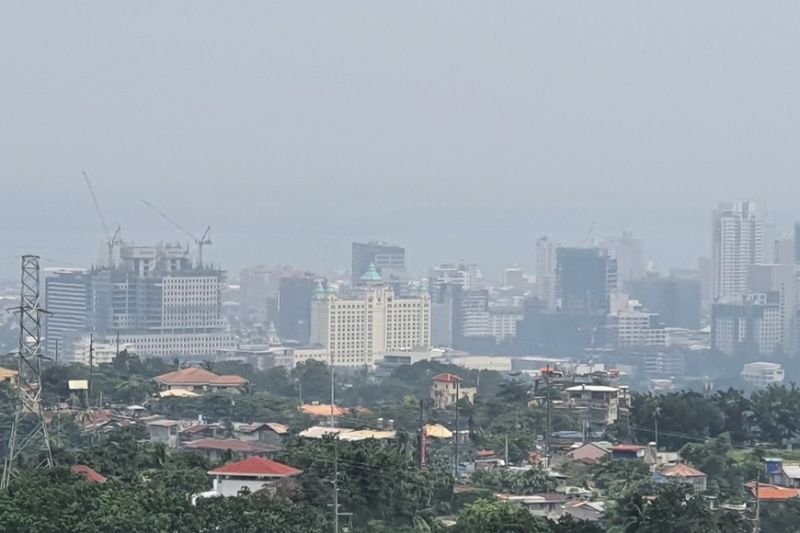 Parts of Cebu City, as seen from the hills of Busay, look obscure from the occurrence of what may be or may not be haze. Ambient air quality experts are checking if clouds of smoke from Indonesia’s wildfires have reached Cebu. In October 2015, a similar air condition occurred in Cebu. (Photo by Arni Aclao)

Cebuanos woke up to what many described as a haze covering the skyline, not knowing if it was fog or the effect of the Indonesian fires that have been polluting the air and bringing air quality to dangerous levels in other countries in the region.

The Environmental Management Bureau (EMB) Central Visayas of the Department of Environment and Natural Resources is conducting the required air quality monitoring tests to confirm if the foggy air condition is a haze or not.

Engr. Cindylyn Ochea, EMB 7 chief of ambient air and water quality monitoring section, asked for the public’s understanding of the office’s failure to be categorical about the air condition as these tests take time. She said results would be known today, Wednesday.

“Until such time that we can come up with a tangible result, based on the decision of our Regional Director (Engr. William Cuñado), we will release an official statement or advisory,” she said.

Since the country’s neighbor Indonesia is experiencing wildfires caused by agricultural practices to clear land for plantations, the EMB 7 would have to prioritize the conduct of tests for both particulate matter (PM) 10 and PM 2.5.

“In terms of ambient air quality, the total suspended particulate (TSP), is the heaviest dust. It’s visible. Particulate Matter (PM) 10 is way smaller than the TSP, but the PM 2.5 is the smallest and we use a separate equipment, filters to analyze how high or low is its concentration,” she said.

She said they have deployed a team to collect samples of the emissions and check if these are trans-boundary pollutants from Indonesia.

Although there is no confirmation yet, Ochea advised those with respiratory problems to take precautionary measures.

Stay indoors with good ventilation, wear dust masks and refrain from physical activity outside, she said.