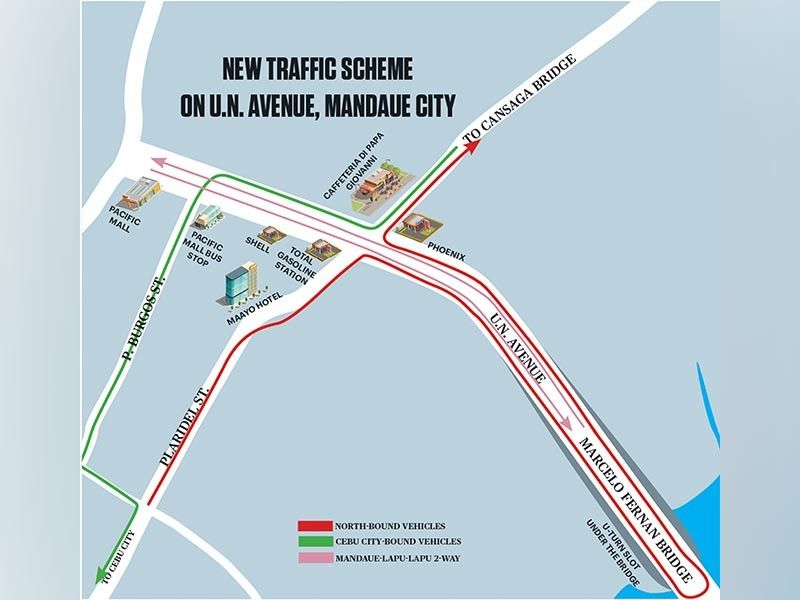 CEBU. A traffic scheme being proposed shows the route vehicles take as shown on the colors of the directional arrows. A dry run of the traffic scheme is scheduled on Sunday, Sept. 22, 2019. (Sunstar Graphics / Josua Cabrera, Enrico Santisas)

A DRY run come Sunday, Sept. 22, of a new traffic scheme at U.N. Ave. in Mandaue City will determine if a roundabout route under the Marcelo Fernan Bridge will decongest traffic at the busy intersection.

With the new scheme, motorists traveling to northern Cebu from D.M. Cortes St. via the Cansaga Bridge take the U-turn slot under the Marcelo Fernan Bridge.

When motorists return to the main road, they can just turn right to the Cansaga Bridge, instead of crossing the intersection.

Taking the U-turn slot under the second bridge is a scheme that has been followed by drivers of public utility jeepneys heading north via the Jagobiao-Consolacion route.

Buses and other northbound vehicles coming from the Cebu North Bus Terminal also take the U-turn slot instead of turning left toward Pacific Mall.

The same traffic scheme was implemented in the area during the earlier stint of Mayor Jonas Cortes.

22, to check if the new traffic scheme is viable.

Nimor said among the concerns they will have to check during the dry run are choke points and synchronization of the traffic lights.

On Saturday, Sept. 21, from 6 a.m. to 10 p.m., Team will temporarily shut off the automated traffic lights on UN Ave. to allow the contractor to adjust the hardware settings in time for the dry run.

In the meantime, Team personnel, barangay tanods and radio communication groups will man the traffic in the area during the system shutdown.

Nimor said the implementation of the new route is in response to the concerns raised by the Mactan Cebu Bridge Management Board (MCBMB).

so as not to give arriving tourists from the Mactan Cebu International Airport a bad impression of Cebu due to heavy vehicular congestion.

Records from Team showed that an average of 28,377 passenger unit cars bound for the Marcelo Fernan Bridge ply the UN Ave. everyday. RTF