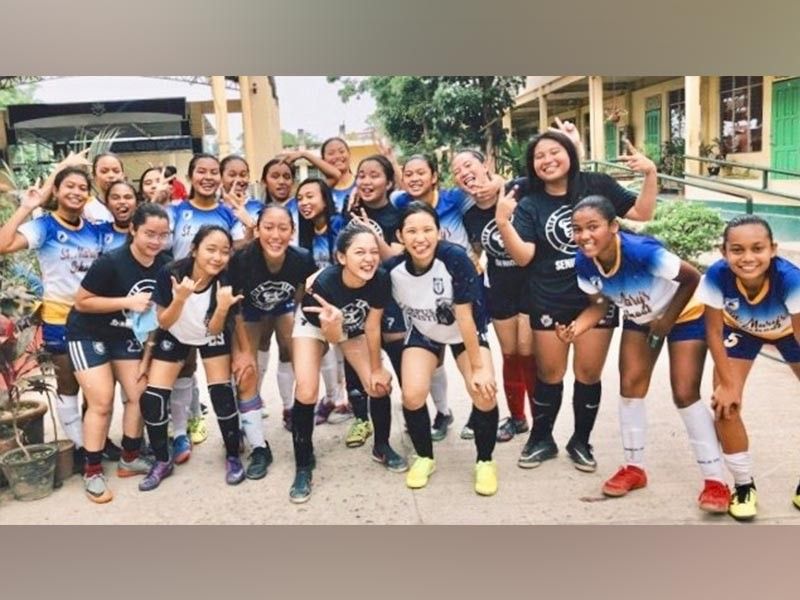 CAGAYAN DE ORO. Triumphant St. Mary’s School footballers (at the back) and their final opponents from Corpus Christi School have gamely strike for a jovial pose after the South District Meet contest at the covered court of Bulua National High School, Cagayan de Oro City, over the weekend. (Jack Biantan)

ST. MARY’S School (SMS) in Barangay Macasandig, perennial runner-up in the Cagayan de Oro City Division meet, will be heavily favored in the Girls Futsal event of the annual tournament set to be slated later this month.

This, after the Higala FC-trained SMS Girls unleashed their might in the South District meet whipping Corpus Christi School, 17-0 at the covered court of Bulua National High School.

SMS has been to the City Meet Girls Futsal final thrice against Xavier University and thrice they failed to capture the championship.

But this time around, they want to make sure that they will win the City meet title and represent Cagayan de Oro in the Regional meet.

Groomed to be the best Futsal players in the region by Cabio and former Higala coach and now Australia- based Weng Dela Riarte, the SMS girls will definitely be a tough nut to crack.

The CdO team finished runner-up to San Carlos City team of Negros Occidental in the competition organized by the Philippine Sports Commission (PSC) as part of its program of discovering young prospects for the national team.

Chaves was the top scorer of the CDO team in Palawan, Loking the starting central defender, while Uy was the starting goalkeeper.

Aside from the three Batang Pinoy veterans, coach Cabio’s girls will be led by probably the best young lady striker in Region 10 today in Maria Chantal Van Ommeren, daughter of Edward and Sally Paras Van Ommeren.

“God willing I wish we can win against XU this time but it depends on how the girls will respond to the challenge,” said Cabio.

They are expected to face rough sailing against rivals Xavier University of coach Dhon Lazo and Bulua Strikers of coach Jun Actub.