Salzburg: Strolling down the City of Mozart 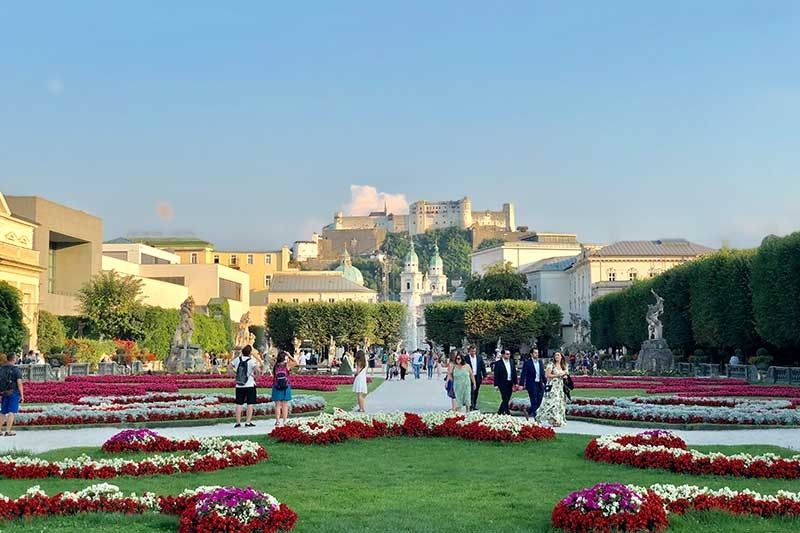 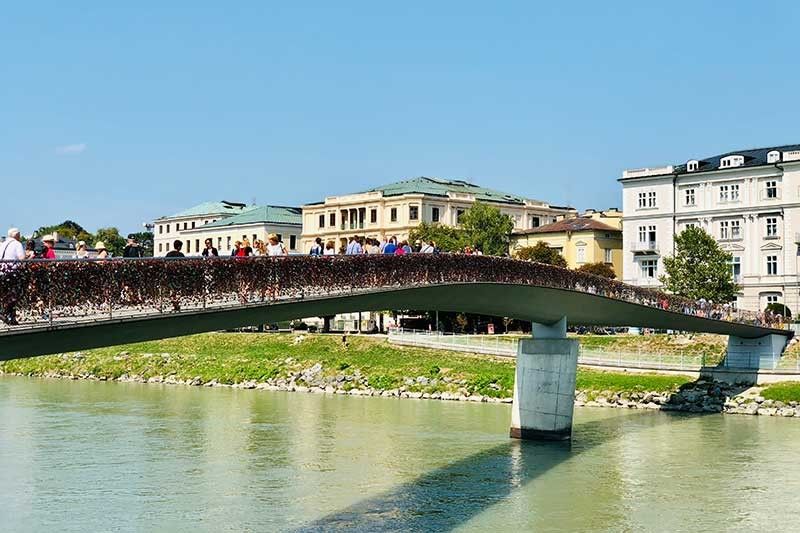 INCREASING-LY POPULAR. Tourists locking their love and commitment above Makartsteg Footbridge has become a tradition. (Photo by Alfred F. Ocianas) 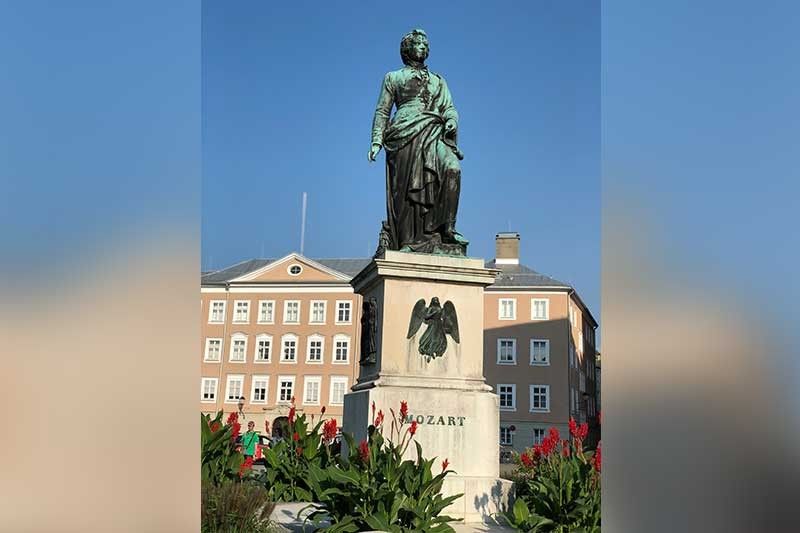 CHILL OUT. The central business district where Amadeus’ statue stands is a popular sundown scene. (Photo by Alfred F. Ocianas) 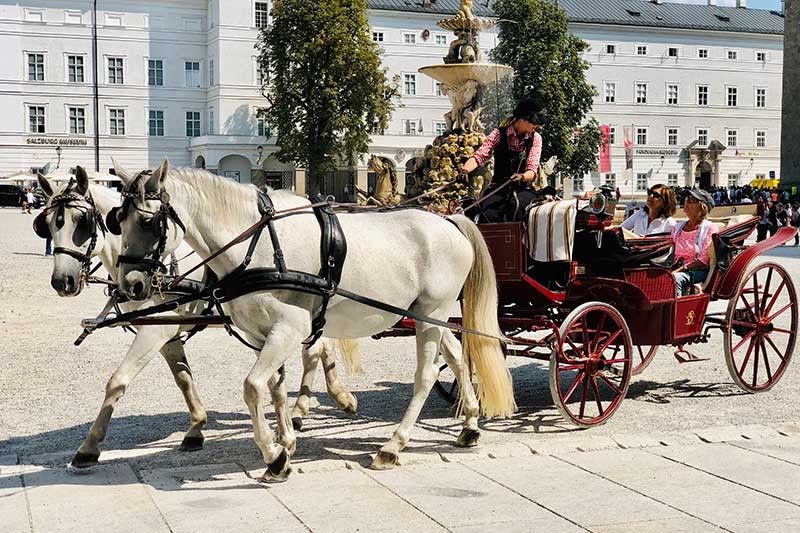 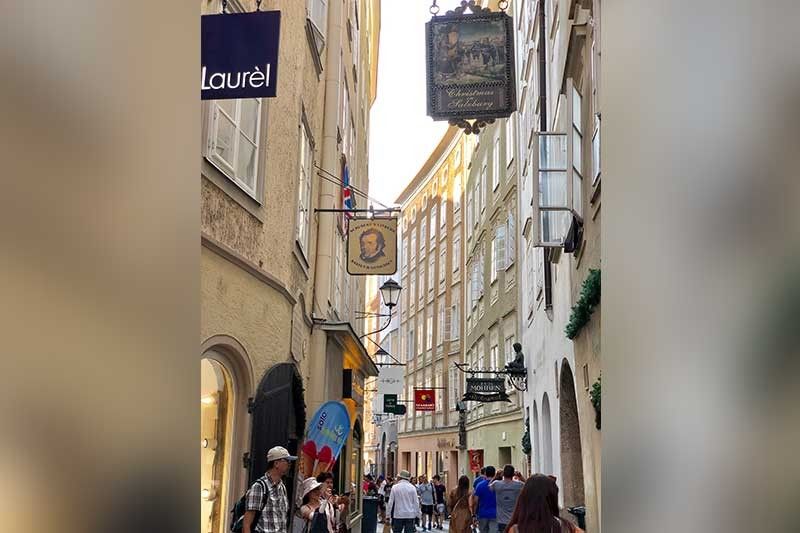 STYLIZED IDENTITY. The hanging signs jutting out from walls at Getreidegasse will catch your eye and win your heart. 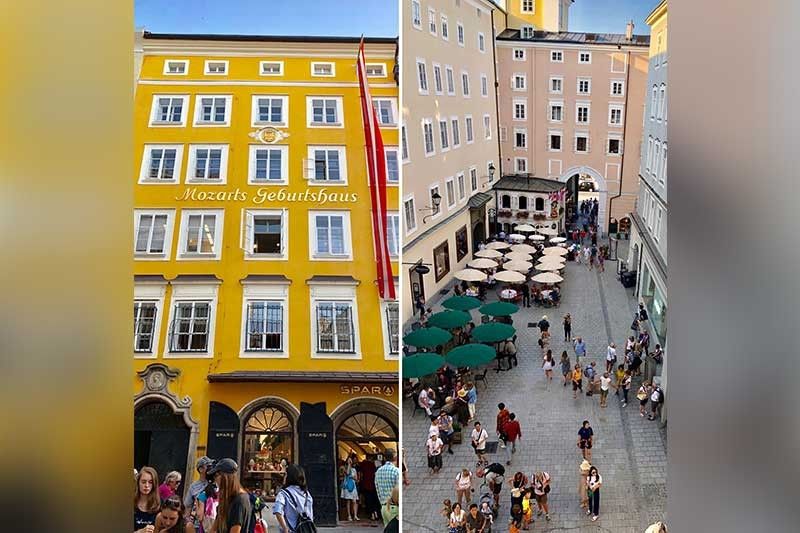 MOST VISITED. It is imperative in this Austrian city to take a tour of Amadeus Mozart’s birthplace. (Photo by Alfred F. Ocianas)

DRAWING strong footfall from tourists, Salzburg is bursting with arts and a heady mix of nature and music.

Nestled on the banks of Salzach River, near the border of Germany, the vibrant urban city has rich memories of the past that shape the present and the future.

While heading for the historic town, the brightly-colored flowerbeds captivated my wandering eyes, and for a moment, I felt everything around me seemed to stop. The sight of the most recognizable landmark in the city sent me into a light trance. It was rather therapeutic and calming, possibly the reasons why tourists need to make a pit stop for a little while.

The Mirabell Palace, as melodious as its name, has been here for centuries, built in the 1600s by Prince-Archbishop Wolf Dietrich von Raitenau for the love of his life Salome Alt; hence it was called Altenau back then.

Having withstood the test of time, many people dream of seeing this monument of love up close. Often reserved for state meetings, concerts and weddings, the classic structure’s salient feature is its imposing staircase embellished with cherubs and scantily-clad statues leading to the very exquisite Marble Hall, where the Mozarts (Leopold, Wolfgang, Anna or “Nannerl”), in the past, played their hearts out to illustrious guests.

Tourists from all over have also been fascinated by the garden that transports them to the whimsical world of The Sound of Music. As the set of the 1965 movie, I was not alone in retracing the footsteps of Maria (Julie Andrews) and the Von Trapp kids singing Do-Re-Mi around the palace grounds. With its grandeur and elegance intact, you will end up with a camera full of pictures. Not only that, you won’t stop smiling when you see the resplendent blooms, manicured lawns, stately fountains and barely-dressed sculptures.

Stretching across Salzach River is the Makartsteg Footbridge, connecting the people to the center of Altstadt (German for “old town”). Renowned as the centerpiece of cultural heritage, the area has kept its 17th century flair, so in 1997 it was listed as a World Heritage Site by Unesco.

It gave me a thrill, searching for the birthplace of Wolfgang Amadeus Mozart. I melted into the crowd along the narrow alleyway brimming with timeworn façades of long-established buildings. This busy shopping district named Getreidegasse bears a carnival-like vibe every single day. The most fascinating things here though are the hanging wrought iron signs jutting out from the side of the walls. Each one unique, they add exoticism and character without losing touch with the past. Finding the most intricate or oddly-shaped one is well worth your time.

Where Mozart spent his younger years and played his first tunes is not to be missed. Glaring in yellow and labeled Mozarts Geburtshaus, the museum is home to vintage exhibits, its feel taking you to the past. Visitors admire highly-prized possessions of the child prodigy – curls of hair, piano, toys, photos and lots of handwritten letters, for the world to see.

Bustling with tourists, the heart of town is where most of the city’s life plays out. The most happening square, Residenzplatz, is packed with shops, bars, restaurants and a variety of shopping choices. Its magnificent fountain looks timeless together with horse-drawn carriages laden with tourists basking in the afternoon sun. The formidable Salzburg Cathedral, where Wolfgang was baptized, allures many with its old-fashioned feel. It has a sophisticated air about it, even if it has been damaged by fires in its 1204-year history.

There is no getting away from the captivating sculptures on all sides. The statue of the most famous Austrian composer stands in the courtyard named in his honor. Mozartplatz is perfect for those who like to hang loose, listen to the melody of the glockenspiel or admire the ornate design of the archbishop residence-turned-museum right before their eyes.

I took a fortuitous detour leading to a necropolis at the foothill of Festungsberg. What I thought was a quiet flower garden by a quaint church turned out to be St. Peter’s Cemetery. Intensely radiant, it lured me in to hidden catacombs and a recess for meditation carved on the face of the cliff. The tranquil serenity of the graveyard added an aura of comeliness to the neatly scattered tombstones on the ground.

Perched atop the Festungsberg, the Hohensalzburg Fortress is always in the spotlight. With so much history going back 942 years, its treasures will have you weaving through unique pieces of antiquities, weaponry and military uniforms. The World of Marionettes, where art and landscape intersect, is filled with enchanting demonstrations. I learned many intriguing aspects about the castle chambers, the city, their customs, handicrafts and archeology. From galleries and towers, gardens and open-air courtyards, to a church and other spaces, I wandered practically everywhere, soaked up some sun and took in the most stupendous views.

Walking down the steep winding road was agonizing and had me starving in the end. For a rare dining experience on the hill, I chose a table at the cliff’s edge, graciously overlooking the surrounding scenery and the city below. With the invigorating mood, I never felt alone digging into my tafelspitz (Austrian-style beef pot roast). The night became even more idyllic as the sky took on numerous hues of the sunset.