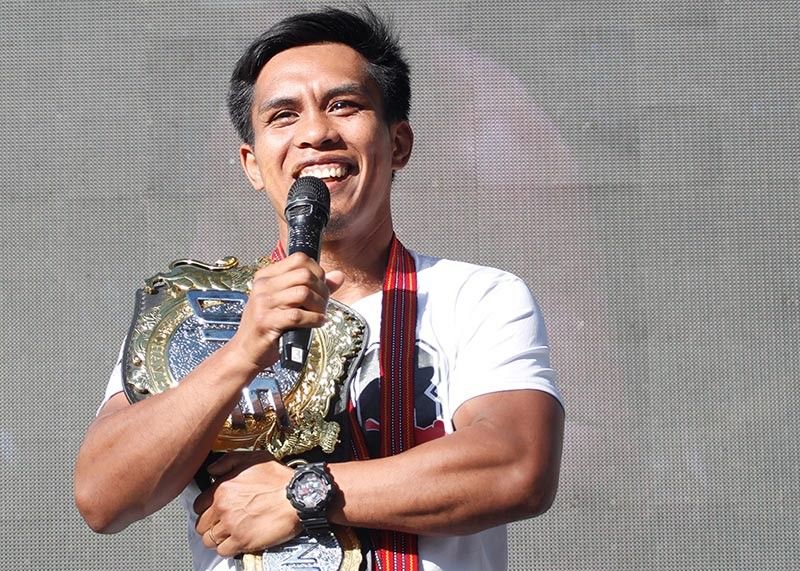 RECLAIM. Ever since losing to Bibiano Fernandez via disqualification earlier this year, Kevin Belingon is laser focused on reclaiming ONE Championship’s bantamweight world title next month in Tokyo, Japan. (SSB file photo)

TEAM Lakay’s Kevin Belingon vowed to go for the jugular on Bibiano Fernandes.

Belingon was given another shot to redeem himself after a nightmare experience in his last match against Fernandes when they meet for the fourth time in ONE: Century Part II set in Tokyo, Japan next month.

The Filipino hero had enjoyed plenty of early success in his first defense of the undisputed ONE bantamweight world title, but the match came to a premature end when he landed some illegal elbows.

Belingon was disqualified with the belt going back to his Brazilian rival, and the Team Lakay star was completely crestfallen.

“We were dismayed by that decision because we didn’t expect the DQ. When I hit the head with an elbow, it wasn’t intentional,” Belingon said. “The last fight with Bibi, during the first and second round, I know I was winning. And then the illegal elbow came, which wasn’t intentional, they gave me a DQ.”

Salvation came almost immediately from ONE Championship chairman and CEO Chatri Sityodtong, who ordered that the bout be remade.

Now, these rivals will contest a fourth match for the gold – the first time that happened in ONE Championship – on October 13.

As soon as the match-up was confirmed, the 31-year-old from Ifugao got straight back to work in the gym to perfect his strategy and repeat the result of their November 2018 rematch that saw him rise to the top of his weight class for the first time.

Now that his date with destiny is in sight, he feels primed and ready to reclaim the belt.

“Our training camp is getting better and better. Our condition and training is going 100 percent in striking, in grappling, and in wrestling,” he said. “Our tactics have not changed. We are focused on our game plan for this fight.”

Belingon enjoyed a ton of success against the Brazilian the last two times they met with his fast, accurate, and powerful spinning back kicks to the body, and he thinks they could be his key to victory again.

He knows his potent, wushu-based striking is where it needs to be, so his main focus in training in Baguio City is on his grappling, but he has still spent time formulating some alternative attacks to counter any changes in Fernandes’ approach.

“Maybe he is thinking that I will strike him again in his body, that’s why I’m thinking he is really preparing for it. That’s why we are finding ways that we can hit or hurt his body,” he added.

Belingon believes Bibiano will be more aggressive in the match, seeing the contest to go down the mat.

“I think he will go to take down on this match. Of course, I’m preparing for his attempts, especially in wrestling and grappling,” he added.

This bout is the biggest of Belingon’s life – not just because he cannot afford to suffer a third defeat to Fernandes, but because it will take place on the biggest martial arts event in history.

However, after a multitude of main events and high-stakes encounters, he insists that he does not feel under any pressure.

Belingon is also not tired of having to prepare to face “The Flash” yet again. He is the only opponent “The Silencer” has had on his radar since last July, but he is still motivated by the challenge he presents.

“Well, I’m still excited for this match against Bibi because I really want to get the world title – that is our main goal,” he said.

He is also positive he can score a finish to prove beyond doubt he is the top competitor in his weight class, and Belingon vs. Fernandes IV will be the final chapter of their rivalry.

“Every time I go to a fight, my confidence is still 100 percent because that is still the key to victory. If you don’t have confidence in the fight, you won’t win,” he said. Roderick Osis