Survivors struggle to move on 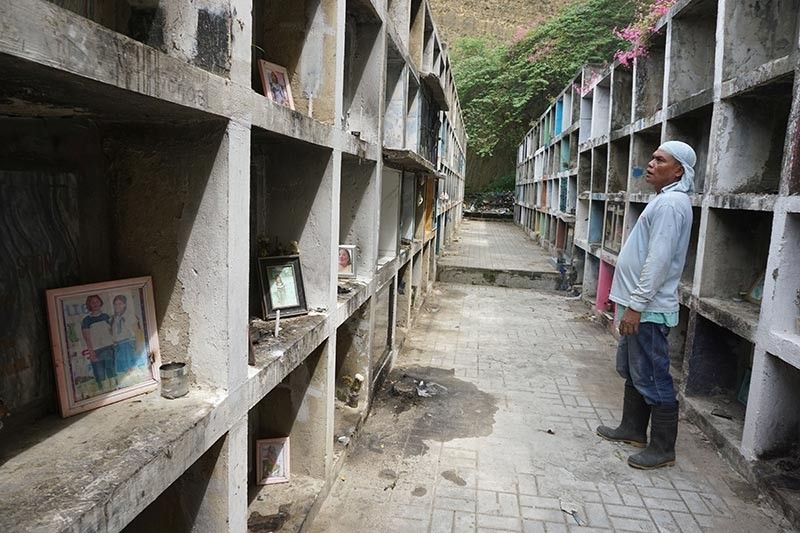 REMAINS OF A TRAGEDY. A year has passed since a landslide buried alive 78 residents of Sitio Sindulan in Barangay Tina-an, City of Naga in Cebu. A cemetery worker cleans their tombs in a public cemetery in the city in time for the victims’ first death anniversary. (Sunstar Photo / Alex Badayos) 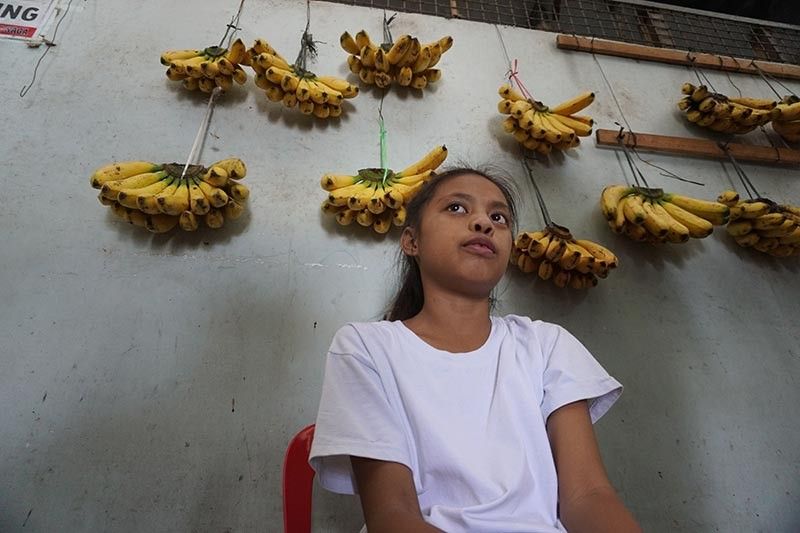 STILL IN GRIEF. Elaizah Siton, who survived the landslide as she was running an errand for her mother just minutes before it hit, now tends to the stall her mother used to manage. (Sunstar Photo / Alex Badayos)

Celebrating New Year’s Eve used to be a favorite family event of the Sitons, but they decided to skip any festivities while the rest of the world welcomed 2019.

Not even the lively fireworks that covered the night sky could brighten the gloomy feeling that had continued to loom over the Sitons’ new home.

Seeing as there were too many empty chairs at their dining table, Narcisso and his daughters Jonalyn and Elaizah found no reason to prepare a feast for Media Noche. Instead, the three of them retired to their bedrooms, eyes shut tight to keep the tears from falling.

Just three months before New Year’s Eve, the Sitons lost four family members to a massive landslide that hit Sitio Sindulan, Barangay Tina-an in the City of Naga on Sept. 20, 2018.

The family’s matriarch, Jocelyn, and daughters Crystal Jean, Althea, 4, and Niña Rose, 8, were among the 78 persons killed in the landslide.

It has been almost a year since the tragedy, but the wounds will still take time to heal.

“We’re okay right now, but there is still that lingering feeling of emptiness. My daughters and I don’t openly talk about it, but we know we feel the same way,” Narcisso told SunStar Cebu in Cebuano.

To commemorate the first death anniversary of his wife, children and other relatives who also died in the landslide, Narcisso said they will offer a Holy Mass on Friday, Sept. 20, 2019.

He will also prepare some of the favorite dishes of his wife and children to remember them.

Aside from eternal peace for the dead, Narcisso said he is also praying for more environment-conscious laws to be implemented not just in Naga but in the rest of the country as well.

“They should stop quarry operations because what happened was not by the will of God. It was caused by the volition of people,” he said.

Despite the tragedy that cost the lives of his wife and three daughters, Narcisso said he had opted to stay in Tina-an as it holds a lot of memories, even bittersweet ones.

The Sitons were among the 1,947 families that were displaced by the landslide.

In the aftermath of the landslide, the Department of Environment and Natural Resources (DENR) delineated the affected area as a “No Permanent Habitation Zone” or “Danger Zone.”

This prompted the DENR to recommend the permanent relocation of some 418 families who were living in this area.

Of the number, around 213 families opted for relocation and will benefit from the Naga Permanent Housing Project of the National Government and the ongoing construction of the City-funded housing project.

Most of the landslide survivors have relocated to Carcar City and the towns of Barili and San Fernando, among others.

Narcisso, though, opted to avail himself of the City Government’s building assistance program instead of becoming a beneficiary of the housing projects for landslide survivors.

It was in Tina-an where Narcisso and Jocelyn had blossomed from young sweethearts into hardworking and loving parents to five girls.

Narcisso and his two daughters decided to live with the former’s 90-year-old aunt, just a few meters from where a retaining wall was built for Ground Zero.

But instead of hiring construction workers, Narcisso himself spearheaded the renovation works for the house and paid only for one assistant.

He used the P100,000 in cash assistance from the City Government for the house’s renovation.

The rest of the construction expenses that the financial aid couldn’t cover were taken from their income. The Sitons sold fruits and spices at the local market.

Whenever Narcisso was too busy building their new home, Elaizah and her older sister Jonalyn watched over their stalls at the market.

“Mother used to come here every day to look after our stalls. But because she isn’t here anymore, my sister and I have taken her place. We come here when we don’t have classes,” Elaizah said in Cebuano.

The 12-year-old said her favorite memory of her family was when they welcomed 2017 with a big feast.

Elaizah recalled how her parents had been up early, cooking dishes enough to feed the

The daughters, on the other hand, busied themselves with other chores and the occasional petty fights among siblings.

“Now, it’s quiet at our new home. I made a wish last New Year, but I will just keep it to myself because saying it out loud might make me cry,” Elaizah said.

If not for his screaming and crying out of his family members’ names, Narcisso might have also lost his eldest daughter, Jonalyn, to the tragedy.

Jonalyn was with her mother and sisters Crystal and Althea when the incident happened. Niña Rose, on the other hand, spent the night at her aunt’s house in the same sitio.

In a Superbalita Cebu report dated Sept. 22, 2018, Jonalyn recalled that they had felt the earth shake briefly before 6 a.m. on that fateful day.

It was then followed by a loud whirling sound, which Jonalyn described as similar to that of a helicopter landing on top of a cliff.

When she went out to check the source of the noise, Jonalyn was greeted by the sight of running water, soil and large rocks heading to their house.

She immediately took Althea, while Crystal followed suit as they ran for their lives.

Jocelyn, who had also come out to check on what happened, immediately hugged her children.

However, the falling debris had caused their kitchen wall to collapse, shoving them under their sink.

Above the rubble, Narcisso had been crying out his wife’s and children’s names.

Hearing her father’s strained voice, Jonalyn used a rock to knock on their liquefied petroleum gas tank. She had hoped that the faint noise would find its way to her father and save her and the rest of their family.

Althea’s dead body was retrieved by rescuers three hours after the landslide happened. An hour later, Jonalyn was found by rescuers, who immediately pulled her out of the rubble.

Rescuers had given Jonalyn an oxygen mask, but she had passed it on to her mother instead.

While under the rubble and despite having a hard time breathing, Jocelyn kept on encouraging her eldest daughter to remain calm and trust the Lord.

Jocelyn was rescued an hour later, but she died at 3 a.m. the following day.

Elaizah, on the other hand, was spared from the landslide.

Just a few minutes before the incident happened, Jocelyn had asked Elaizah to buy some butane as she was about to prepare breakfast for the family.