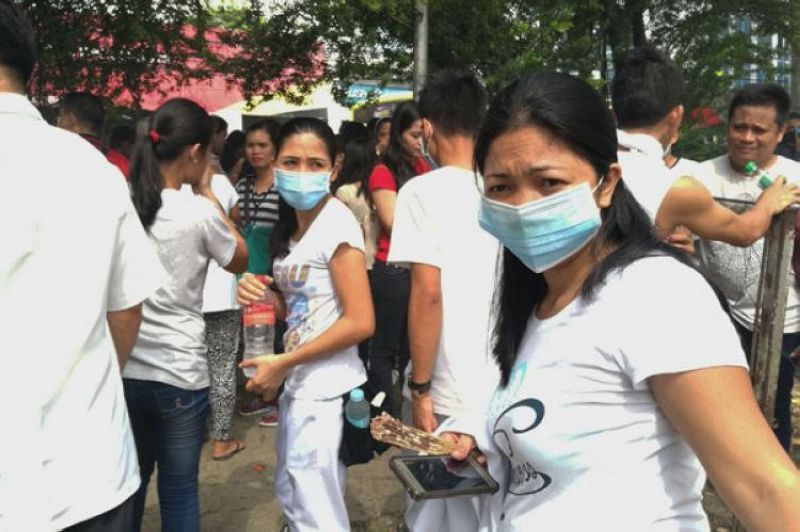 THE haze covering parts of Metro Cebu at certain times of the day reach “unhealthy” levels, exposing the elderly, the sick and young children to health risks.

With this finding, education and health officials in Cebu are advising the public to take protective measures such as to wear masks, stay indoors and avoid outdoor activities.

Engineer Cindylyn Ochea, EMB 7 chief of the ambient air and water quality monitoring section, said that, as of 8 a.m. Wednesday, data collected after conducting the Particulate Matter (PM) 2.5 test has a reading of 56 micrograms per normal cubic meter. This, according to her, is above the safe guideline value of 50 micrograms per normal cubic meter.

“That was the result we got from our station in Talisay City. We also installed other stations in the rooftop of a building in IT Park and one other in Cordova. But the results of these two stations will be available after 24 hours since we are using manual equipment,” she said.

PM 2.5 is a dust particle measuring 2.5 micrometers in diameter or about three percent the diameter of a human hair.

The EMB 7 still has to identify how long the haze has been in the atmosphere. “We are still tracking the trend based on the results. There are various meteorological factors that could affect its concentration in the air. First is the rain, which could wash it away. Others include wind direction and wind speed,” she said.

In the advisory released by the Department of Health (DOH), the elderly, children, those with asthma and other cardiovascular diseases must stay indoors with good ventilation, wear personal protective equipment such as masks and eye goggles when outside, and refrain from physical activities in extremely polluted areas.

“We still have to determine the types of gasses of the haze. Yes, it has risks to health, especially for the elderly and the neonates and those with allergies. Better to avoid exposure by staying indoors as much as possible,” Dr. Jaime Bernadas, DOH 7 director, said.

In Indonesia, thousands of fires intended to clear agricultural land for plantations created thick clouds of smoke that forced disruptions in work, school and air travel. The haze brought about by the fires has reached neighboring countries Singapore and Malaysia.

So far, in the Philippines, the haze has been reported in Cebu and some areas in Mindanao. (WBS/RSR)