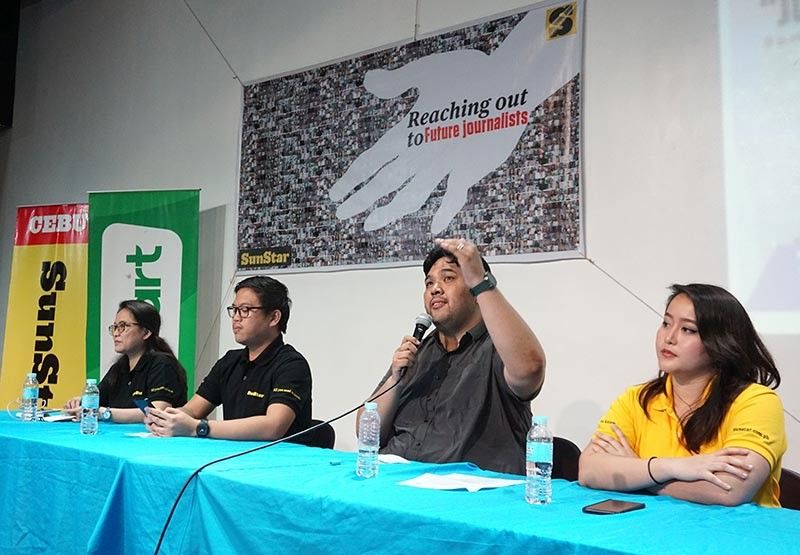 STRATEGIES. Carlo Ople (third from left) of PLDT shares during a forum how one can earn on social media. With him are SunStar Cebu’s Mildred Galarpe, Luis Quibranza III and Tiffany Neri. (Sunstar Photo / Alex Badayos)

DIGITAL and technology are providing content creators with opportunities to publish their interest and monetize it.

The same is available to journalists and the media, said Carlo Ople, vice president of PLDT Digital Marketing Strategy and Consumer Disruptive Business.

Ople was the speaker in the forum “Reaching out to Future Journalists: Journalism Transformations” held at the Marcelo B. Fernan Cebu Press Center on Wednesday, Sept. 18, 2019. The event was organized by SunStar Cebu and sponsored by Smart Communications Inc. and Cebu Parklane International Hotel, among others, as part of the Cebu Press Freedom Week celebration.

Ople stressed that in digital, content is king and gadgets are just secondary.

He spent just a few thousand pesos for his cell phone and didn’t even have a tripod when he started.

A Youtuber himself with 500,000 subscribers, Ople said the content he produces is all about his hobby, collecting shoes.

The Youtuber also shared his strategy in creating content and making money out of it.

Thumbnails, titles and the first 15 seconds of the video or the vlog are the components that could make the people click and view the vlog, Ople said.

As a promotion strategy, Ople shared that family and friends are the basic support system of one’s vlog by asking them to like, share and subscribe as it may create more connections. Next would be posting content in online communities like Facebook groups. Another way to promote the channel is to collaborate with other Youtubers with the same content.

As a monetization strategy, a content creator should use advertisements in his or her vlog.

The creators can also have brand deals with companies.