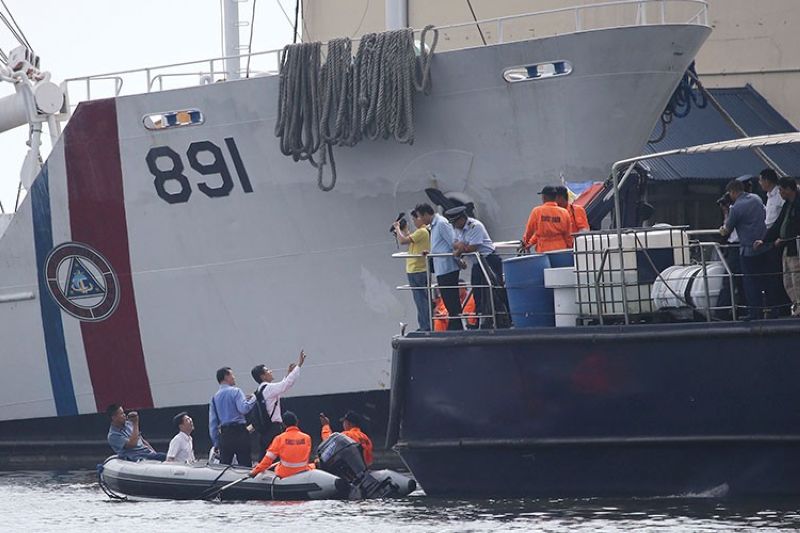 MANILA. In this May 28, 2013, file photo, Taiwanese investigators ride a rubber boat as they inspect a ship involved in the alleged shooting of a Taiwanese fisherman while they continue their probe in Manila, Philippines. (AP)

MANILA -- A Philippine court found eight Filipino coast guard personnel guilty Wednesday, September 18, of conspiring to shoot and kill a Taiwanese fisherman in a 2013 incident at sea that strained ties between the neighboring nations.

Manila Regional Trial Court Judge Eduardo Ramon Reyes said in a decision that the coast guard men failed to prove that their action of opening fire on the Taiwanese boat that killed Hong Shi Cheng on May 9, 2013, off the northern Philippines was legally justified. The coast guard men, who remain free on bail, will appeal.

Reyes said in his 32-page decision that the accused conspired "with intent to kill, killed victim Hoh Shi Cheng with no legal justification duly proven." The coast guard men were sentenced to jail terms of up to 14 years and ordered to pay for damages.

Taiwan's government welcomed the ruling, saying in a statement that the shooting happened in the two sides' overlapping exclusive economic zones and that the Philippine government vessel "chased and attacked" the unarmed Taiwanese fishing boat, causing its 65-year-old skipper's death.

Philippine coast guard spokesman Armand Balilo said the agency's personnel were saddened by the ruling but would continue patrolling the country's waters.

"We believe that they just did their duty defending our territorial integrity. But the court has spoken and we will respect that and we will continue to support them," Balilo told reporters.

The coast guard men argued during the trial that the Taiwanese boat, Guang Da Xing No. 28, illegally entered Philippine waters in the Balintang Channel and sped away instead of stopping when they were about to board it.

The Taiwanese boat was hit by gunfire at least 45 times. Hoh Shi Cheng was hit once in the neck near the entrance to the boat's engine room while the other crewmen took cover, the court said.

Taiwanese officials protested the killing and the use of excessive force, prompting Philippine officials to issue an apology and order an investigation of the coast guard personnel involved in the incident.

Relations have since normalized between the Philippines and Taiwan, where thousands of Filipinos live and work. Aside from a number of territorial spats along their sea border, the two governments have overlapping territorial claims in the volatile South China Sea. (AP)