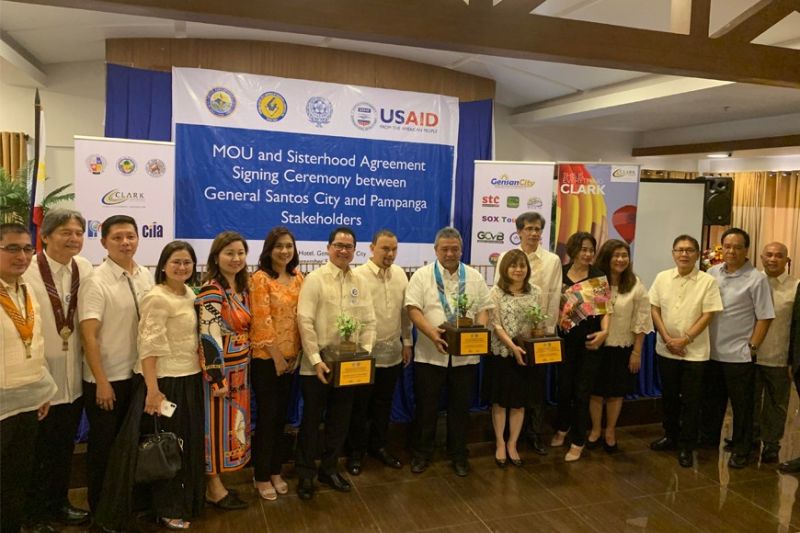 The tri-chambers agree that there is a huge potential for economic and cultural synergy between the Metro Clark Area and South Cotabato, where GES is strategically located.

“The launching of flights between CRK and GES could accelerate the synergy,” PamCham president Renato G. Romero said.

Clark, on the other hand, has long been the center of commerce and tourism in the northern regions with a booming 25 million estimated population.

“The direct flights from Clark to General Santos City will have an immediate impact in the business and tourism industry. Not only can we move people, but more we can move products and information. The cooperation will bring forth enormous opportunities for the north and south,” Romero said.

He added that they will soon write to airline companies inviting them to launch commercial flights from Clark to General Santos City.

Romero said that during the last Tuna Conference they attended in General Santos City, the tri-chambers learned that the multi-million tuna industry is still growing while investors in the south are eyeing Clark as a trans-shipment hub in the north.

Romero added that the South Cotabato is currently exporting tuna to Japan and Australia.

“But they want to explore the local market because they know there is a huge demand in the Philippines. The direct flights to Clark will definitely improve their sales and would eventually open economic and tourism opportunities both for them and for us,” the PamCham president explained.

The issue of regulation on the tuna industry though is a serious concern. Romero said that during the tour in General Santos City, he said they observed that there is still a room for enhancement in terms of regulation on capturing and selling tuna.

“We can help them even as we already promised to support them. We already signed a memorandum of agreement with the business chambers in the South. This cooperation is expected to be mutually beneficial to all the parties. They have unique needs and concerns as well as our chambers, but we all have the same goal, that is to help each other and advocate for economic development,” Romero said.

Under the agreement, the chambers agreed to share opportunities for information exchange on chamber management and development, economic development and travel investments.

They also agreed to explore ways and means in promoting trade and industrial cooperation and facilitate joint venture arrangements, technical cooperation, market networking and linkages. In addition to these, they also vowed to jointly promote tourism in their areas of operations through joint marketing, sharing of best practices in tourism, support intercity flow of local and foreign tourists, direct flights and businesses.

Meanwhile, aside from the collaboration of the private organizations, the sisterhood was likewise extended to the local government units (LGUs) of South Cotabato and Pampanga. According to Romero, an agreement was also forged between General Santos City and the cities of San Fernando, Angeles and Mabalacat. The LGUs’ memorandum of understanding covered economic cooperation and tourism exchange.

The exchanges of ideas and sharing of experiences between the tri-chambers and the private groups of South Cotabato are all part of PamCham’s advocacies for balanced development and sustainable governance.

Romero said their cooperation and visit in the south is just one of the chamber’s advocacies for economic development and tourism.

“We have specific committees in PamCham that monitors and develop programs for business promotions and business advocacies. It is important for us to help and spread the good practices. Without our advocacies, we cannot achieve more and promote business development,” Romero said. (With reports from MZA)