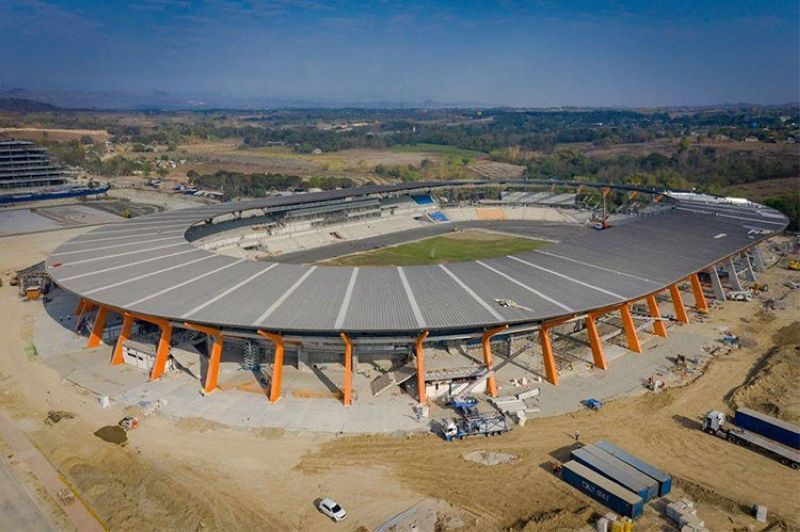 CLARK FREEPORT -- The sports complex at the New Clark City will be completed in time for the Asean Games scheduled on November 30 to December 11.

The Asian Development Bank (ADB) by the Bases Conversion and Development Authority (BCDA) assured this during a recent presentation of ongoing projects inside the New Clark City.

The BCDA showcased the speedy construction of the world-class sports complex at the recent ADB Board and Management Retreat held in Clark Marriott Hotel.

BCDA president Vince Dizon said the sports complex is built within 18 months and just in time for the Philippines’ hosting of the 30th South East Asian Games.

The progress in New Clark City Phase 1 can be attributed to the Duterte government’s "exceptional" leadership of getting things done fast, said Dizon.

Envisioned to be a training hub of national athletes, New Clark City features the 20,000-seater Athletics Stadium, the 2,000-seater Aquatics Center, an Athletes’ Village complete with housing amenities, and a 1.4-km River Park Corridor that will provide recreational spaces for residents.

“The value proposition of [New Clark City] is that it’s well-planned and hopefully with the continued momentum of what President [Rodrigo] Duterte has started, not fall into the traps of urban centers throughout the world. You will have a very livable city where there’s generous green spaces and efficient public transport system,” Dizon said.

Other sustainable pioneer developments in New Clark City include the 288-hectare Filinvest’s multi-gen metropolis that will adopt a “live, learn, work, and play” environment, as well as the 500-hectare mixed-use industrial park, in partnership with Gezhouba of China.

The National Government Administrative Center is also gaining traction from government institutions such as the Supreme Court of the Philippines, which will establish a 5.8-hectare Judiciary Complex, and the Bangko Sentral ng Pilipinas, which will transfer its 29.22-hecatare currency production facility in the new city.

Set to emerge as the next major gateway, the Clark International Airport will open a new terminal next year that will triple passenger capacity to 12 million annually.

A unique advantage of the Clark airport is its strategic connection to major infrastructures such as the North Luzon Expressway and the Subic-Clark-Tarlac Expressway.

A road link from the Clark airport to New Clark City is also being constructed to boost accessibility in the area.

ADB is BCDA’s public-private partnership transaction adviser to water and power utilities, and as a partner in conducting a Biodiversity Assessment and Hydrology Study meant to conserve the flora and fauna in the city.

The bank has also been vital in the construction of the Malolos-Clark Railway Project, which will further enhance interconnectivity and economic growth in Central Luzon.

The project is part of the 163-kilometer North-South Commuter Railway that will connect Metro Manila to the region.