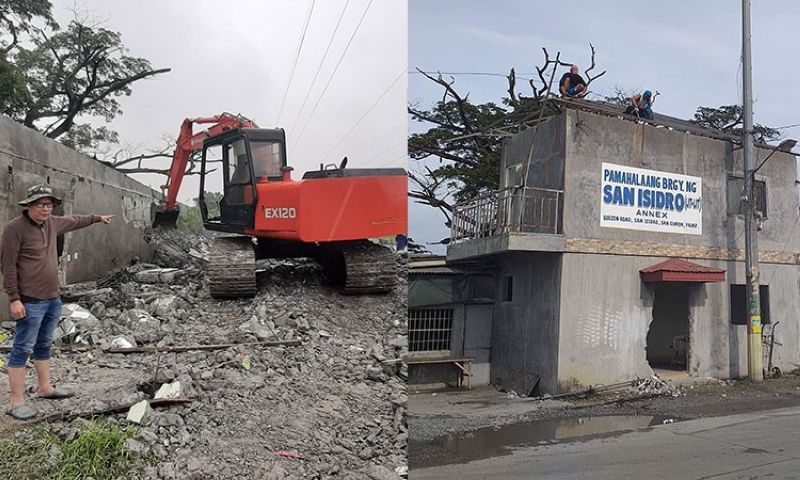 PAMPANGA. ABC president and San Isidro village chairman Randie Flores facilitates the demolition of what remains of the barangay hall annex in compliance to DILG MC 2019-121. Another photo shows the structure before it was totally torn down. (Princess Clea Arcellaz)

A BARANGAY hall annex that formerly served as action center against crimes along the once-ghost town stretch of Quezon Road in San Simon has been demolished as part of the road clearing ordered by President Rodrigo Duterte.

San Isidro village chairman Randie Flores said the extension of their barangay hall, which was constructed about five years ago, encroached the 7.5-meter allocation for road widening as required by the law.

“When we constructed the barangay hall annex, we have not thought that we exceeded the supposed area allowed for construction. Besides, our main purpose then is to put up an office that would help avert criminal activities perpetrated along our area,” he said.

Flores recalled that prior to the construction of the infrastructure, the stretch of Quezon Road was known to become a venue of hold-up and hijacking incidents, as well as disposal area of dead bodies due to lack of establishments along the area.

He said some of the factories that first invested in the area pooled in their resources, particularly construction materials, to establish the barangay hall annex in order to protect the then-small community against threat of illegal activities.

“But right now, the stretch of Quezon Road has given birth to numerous industrial plants, and we believe that the barangay hall annex has successfully served its purpose and is not anymore needed considering the activity in the area,” he said.

“It is now time that we abide by the law and give way to further development eyed in our area that will benefit our kabalens,” said Flores, who is also the Association of Barangay Captains president in San Simon.

Flores also reported that aside from the barangay hall annex, several residential houses and business establishments that encroached the portion of public roads in the village were also demolished to comply to the Department of the Interior and Local Government Memorandum Circular 2019-121.

Industrial plants along Quezon Road that also went out of their property line and constructed illegal structures will be given formal notice to remove them immediately or the local government will impose proper measures, he added.

Meanwhile, Mayor Abundio Punsalan Jr. said the local government is 70 percent compliant to the executive directive before the 60-day deadline expires on September 29.

“Almost all our barangays are finished in their road clearing operations but some of the business establishments along MacArthur Highway have not complied yet but we already sent them formal notice. If they will not do it voluntarily in the next three days, we will be doing it in their behalf,” he said.