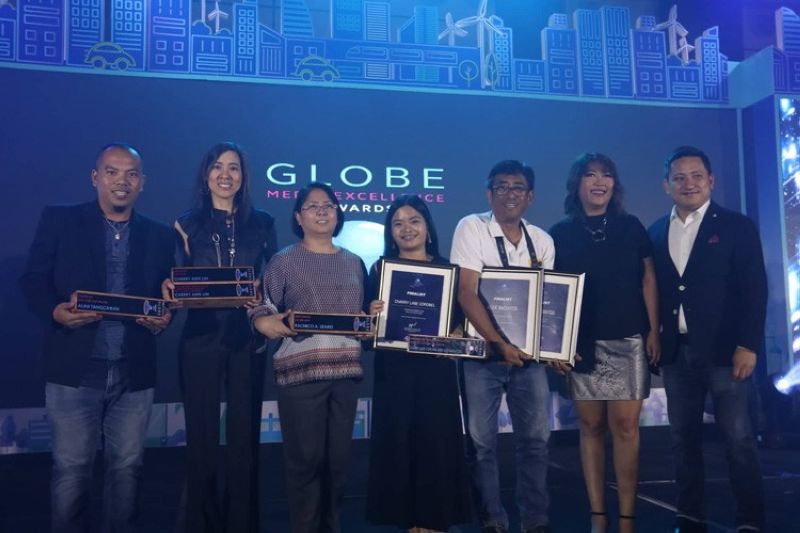 CEBU. SunStar reaps five awards in this year's Globe Media Excellence Awards. SunStar winners are (from left) Alan Tangcawan for Photo of the Year for Digital; Cherry Ann T. Lim for Editor of the Year and Explanatory/Investigative Story of the Year for Print; and Charry Lane Coronel and Alex Badayos, Explanatory/Investigative Video Story of the Year for Digital. With them is Nini B. Cabaero, SunStar Cebu Editor-in-Chief (third, from left), who received the award on behalf of Atty. Pachico A. Seares, SunStar Cebu public standards editor; Monday Gonzalez, Globe's director for corporate communication (second, from right); and Patrick Gloria, Globe's external affairs head for Visayas and Mindanao (right ). (SunStar photo/Amper Campaña)

Cherry Ann T. Lim, SunStar Cebu senior editor for print, was named Editor of the Year. She also won the Explanatory/Investigative Story or Documentary of the Year for Print for her three-part series on child malnutrition.

The Editor of the Year and Newsmaker of the Year awards honor journalists and their "impactful body of works throughout the year." Lim and Seares were chosen based on their contribution and influence in the media community and the industry.

Lim, who has a string of local and national journalism awards to her name for her investigative reports for print, has removed herself from her comfort zone and expanded her core competence to a new field -- she now anchors SunStar's NewsBits Tonight and hosts live interviews and discussions.

Seares, who is now in retirement, continues to guide SunStar Cebu and the community press by offering himself in industry discussions and coming up with statements and positions to clarify issues facing the press. He is a pillar of Cebu journalism and he continues to inspire those who were able to climb the newsroom ladder to attain top editorial positions because of his instruction.

Charry Lane Coronel and Alex Badayos, also of SunStar, won the Explanatory/Investigative Video Story of the Year for Digital for their Katig (Outrigger) video documentary.

Also named a finalist in the same category was "Dibuho Kisame," which was produced by Superbalita Cebu editor-in-chief Michelle So, SunStar opinion editor Januar Yap and chief photographer Alex Badayos.

Photographer Alan Tangcawan of Superbalita Cebu, won the Photo of the Year for Digital award. Named finalists in this category were SunStar photographers Alex Badayos and Amper Campaña.

The other categories and winners in this year's GMEA are the following:

* News Report of the Year for Print -- Joey Gabieta

Each of the winners received a trophy and cash.

Nicavera is the only print journalist from Western Visayas who made it to the finals of GMEA 2019.

The GMEA recognizes journalists, bloggers and social media advocates in the Visayas and Mindanao who have shown excellence in their craft, commitment to their profession and have created positive impact in the society. The awards started in 2012.

Entries accepted are stories, photos and videos that showed the people's care for the environment, as well as those that delve on positive societal impact, innate care for people and digitalization. (LMY/SunStar Philippines)